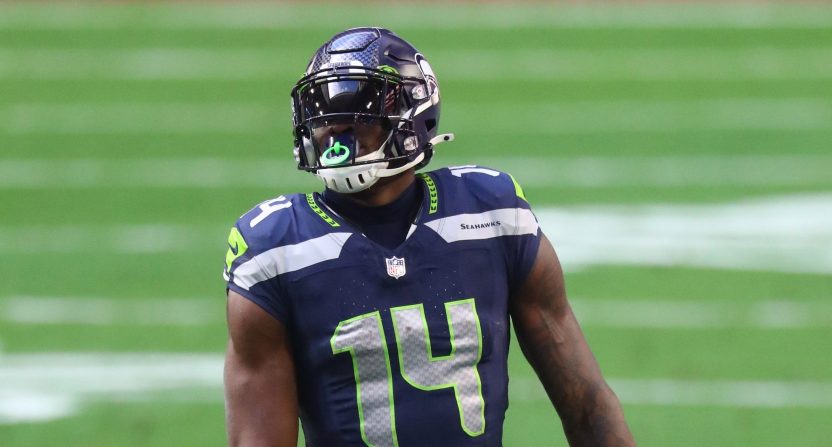 On the brink of the NFL’s new league year, let’s get a feel for which NFL players are providing the best contractual value in the league. Obviously, rookie deals are destined to dominate such an examination, so we’ve reserved some spots for contracts belonging to veterans as well. Oh, and minimum two years’ experience required.

1. Baltimore Ravens QB Lamar Jackson: The 2019 MVP will make just $3 million in 2021, making him the 32nd-highest-paid signal-caller in the NFL.

2. Seattle Seahawks WR DK Metcalf: A 23-year-old athletic freak of nature coming off a 1,303-yard, 10-touchdown season just halfway through a rookie deal that pays him a mere $1.5 million a year.

3. Tennessee Titans WR A.J. Brown: Brown was drafted just seven slots behind Metcalf, and both are off to unbelievable starts. He’s also just 23, and is due barely more than $1.5 million next year despite coming off back-to-back 1,000-yard seasons.

5. Buffalo Bills QB Josh Allen: The MVP runner-up from 2020 was one of the biggest difference-makers in the sport, despite a $5.9 million cap charge. That will grow to $6.9 million in 2021, but 25 quarterbacks will earn more than him in his fourth NFL season.

6. Green Bay Packers CB Jaire Alexander: The 24-year-old Pro Bowl cover man has become a shutdown artist and will be owed just $3.8 million in the final year of his rookie contract.

1. Tampa Bay Buccaneers QB Tom Brady: Six quarterbacks have higher cap numbers than the seven-time Super Bowl champion, and that number is likely to increase if/when he signs another extension this offseason. Brady continues to be worth so much more than his $25 million average annual salary.

2. Kansas City Chiefs OT Mitchell Schwartz: The 31-year-old former first-team All-Pro is due just $10 million in a walk year. He might be the best right tackle in the game, but 24 players at his position make more dough.

4. Los Angeles Rams OT Andrew Whitworth: He’s old, but Whitworth remains one of the most reliable and effective left tackles in the sport. But his $11.2 million average annual salary ranks 20th at that position.