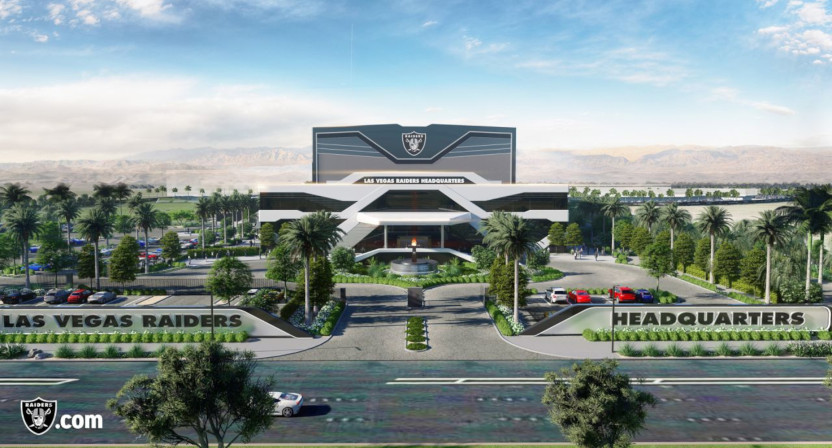 Moving to the Las Vegas area has already proved very lucrative for the Raiders, as they just made $191 million for a sale of their partially-finished-headquarters in Henderson, Nevada in a leaseback deal. That’s particularly notable considering that the headquarters (a Raiders.com rendering is seen above) is on 55.6 acres of land that they bought for just over $6 million (half its appraised price) in 2018 from the city of Henderson. Eli Segall of The Las Vegas Review-Journal has more:

The Raiders have sold their Henderson headquarters for $191 million and leased it back, a rapid sale of a project that is still being built by a team that has not yet played a game in Las Vegas.

Chicago-based Mesirow Financial purchased the under-construction football facility across from Henderson Executive Airport and leased it back to the NFL team for 29 years, with seven 10-year extension options.

…Public records show the Raiders entered into a ground lease at the site and subleased it right back, indicating the team still owns, but is now renting, the land underneath the complex.

There’s an obvious immediate cash flow gain there for the Raiders, as they acquired this land at below-market price (in a no-bid sale thanks to it being deemed “in the public interest“) and were able to sell it and the under-construction facility on it for over 30 times as much. But it’s not a simple 30 times multiplier of what they paid as profit; they bought vacant land and paid for construction on it. The above-linked 2018 Associated Press piece on the land deal estimated the Raiders would spend “about $75 million” building the headquarters, and the team told the Review-Journal it would cost “north of $75 million” in December 2019, so the real immediate gain looks like $110 million (presuming the Raiders are still responsible for the remainder of the construction costs; if they’re not, the gain is larger). A gain of $110 million on a $81 million investment is a 135 percent profit.

However, that’s not all profit when you consider the long-term consequences for the Raiders’ bottom line, as they’re going to be paying an undisclosed amount of rent to Mesirow for presumably at least the next 29 years (unless they have an out, or try to move again). That amount of rent isn’t necessarily more than what Mesirow paid, though, as Raiders’ executive Don Webb told the Review-Journal about 30 acres of that land was being set aside “for future uses”; this may be the Raiders farming further development of that land out to Mesirow, and Mesirow may be counting on making their money back that way rather than through direct rent payments from the Raiders. But still, why would the team want to sell this land and rent the HQ back rather than develop the land themselves? Well, Segall’s article has an interesting comment on that from broker Patrick Luther, who says he’s been involved in more than 500 leaseback deals:

Sellers give up ownership of their property and, according to Luther, face tax implications with receiving a big bundle of money. But they also get a cash injection without having to take out a loan, he noted.

…Luther, who said he has worked on more than 500 sale-leasebacks, noted the nine-figure Raiders deal stands out.

“Usually they’re not this large,” he said.

But while most leaseback deals may not be this big, some are. The article mentions other leaseback deals in Vegas,  including MGM Resorts selling the Bellagio last fall for $4.2 billion and leasing it back for an initial annual rent of $245 million (with another $825 million from selling Circus Circus and leasing it back, giving them a net injection of $4.3 billion cash after taxes and transaction costs). That’s a notable deal to consider here, as MGM used that money for immediate needs (debt reduction and dividends to shareholders).

So this maybe fits into the overall discussions of how Raiders’ owner Mark Davis (who owns a 47 percent controlling stake in the team) doesn’t have that much money relative to his peers. CelebrityNetWorth has him at $250 million, and regardless of what the exact figure is, he’s certainly not as rich as many of the billionaires who own NFL teams. And maybe the Raiders needed some immediate capital for their various Vegas construction  and relocation efforts, and this looked like a better way to do it than a loan.

There’s certainly a gain here for the Raiders. They acquired this property at a well-below-market valuation (half of the market valuation), and they’ve now sold it less than two years later for 235 percent of what they’ve spent so far (counting the entire $75 million in construction costs as theirs). But there are some protections for the city; the Henderson City Council approved a measure earlier this month that will ensure (as per comments from city spokesperson Kathleen Richards to Segall) that the facility is built “in the same manner as originally agreed,” that the property is used as the Raiders’ headquarters and practice center, and that the requirement for at least 250 non-football-player jobs is met. And the city goal of offering the Raiders a sweetheart deal in order to draw more attention to and business to Henderson still seems achievable, so it’s not necessarily terrible for them that the Raiders have made this sale and leaseback deal; it does reinforce how Henderson sold this land so cheaply, but it’s not automatic that they would have received at least the $12 million assessment value if selling to anyone else, or that they could have made this something worth $191 million on their own.

But this does reinforce how important real estate transactions are to NFL teams these days (see also the Rams’ $5 billion stadium/neighborhood project in Los Angeles), and it is yet one further point illustrating how far cities often go out of their way to pave the way for NFL teams. The Raiders have managed to turn a deeply-discounted piece of land into something that they’ve received $191 million for, even if they have had to pay lots of construction costs and even though they’ll have to pay rent on their headquarters going forward. And that’s a nice instant gain for them out of moving to Vegas, long before they’ve played an actual game there.