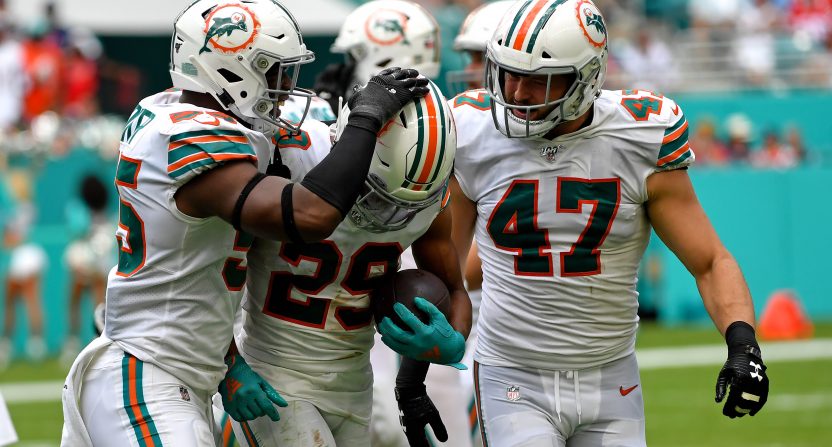 The Miami Dolphins, as you’ve surely heard, have lost their first two games by a combined score of 102-10. They are bad. The Ravens waltzed through a nonexistent Dolphins defense despite holding back their offensive playbook. The Patriots scored two defensive touchdowns en route to a 43-0 shutout.

Everyone knew the Dolphins would be bad, even before the sudden (and ongoing) fire sale, but few could have expected them to have one of the worst two-week stretches in NFL history. Miami are really bad and is a legitimate contender to finish 0-16.

In some ways, they are a run of the mill bad team. The league cycles through them; last year, the Cardinals were 3-13 in a season with more parity, and 2017 saw the Browns’ 0-16 season. Miami, who famously went 1-15 in 2007 before riding the Wildcat to an 11-5 playoff season in ‘08, know the cycle. Often, a gap in the quarterback situation (whether due to significant injury or the desire to draft a new one) is the primary cause for downturns.

This Miami season feels unique. They are tanking in ways that we aren’t used to seeing in the NFL. Last year, they went 7-9, and as recently as 2016, they were a 10-6 playoff team. General manager Chris Grier decided that a complete teardown was preferable to continuing seasons of six-to-10-win mediocrity.

Now, the Dolphins have sent 2018 11th-overall pick Minkah Fitzpatrick to the Steelers upon request for a package that centers on a 2020 first-round pick. Outside of All-Pro cornerback Xavien Howard, who is feeling a bit lonely, non-Dolphins fans would be hard-pressed to name multiple players on Miami’s defense. With running back Kenyan Drake floating around in trade rumors, their talent quotient on offense could continue to decrease.

Making the team as bad as possible, to then theoretically rise up with a brand new young core, is clearly Grier’s plan. It is a fascinating decision. Miami exchanges chances to at least hang around the playoff race for an Astroball-style rebuild, in which they spend years being terrible and accumulating assets. The Houston Astros did it and won the World Series in 2017. The Philadelphia 76ers trusted the process.

What’s interesting about the Dolphins is that they at one point had a base to build from, and chose to nuke it. The Astros and Sixers had been bad, or at least unpromising, before they tore it all down. Miami had a few good players and actually made the playoffs not long ago, losing to the Steelers in the Wild Card round. It’s fairly common for teams in other leagues to choose rebuilding over perennial mediocrity, but NFL teams usually are different. If you have a QB, then you have a chance to build. If you don’t, you go 5-11 and draft one. The Dolphins made it a black and white decision: either continue the status quo, perhaps replacing the injury-prone Tannehill in the process, or rip everything to shreds and look forward to 2022.

They could have been a normal bad team this year. Letting a 37-year-old like Wake go is a reasonable decision. They nabbed late round picks in exchange for Quinn and Alonso. But Grier took the approach of being as bad as possible, and will hope that the stockpile of draft assets he acquired from the Texans and Steelers will make up for trading away a prized young tackle and a star second-year safety.

NFL teams can build relatively quickly by hitting on a few draft picks, developing in-house, and making shrewd moves on the free agent and trade markets. The current Browns may be a little overhyped, but they are certainly talented, and they only went 0-16 a couple of years ago. The Jaguars went 3-13 in 2016 and 10-6 in 2017, narrowly missing on a trip to the Super Bowl. With good coaching, it’s possible to turn the ship around.

Miami seem ready to tank for the long haul, though. Trading Fitzpatrick and Tunsil signaled their intent. The offensive line is dreadful, and with Fitzpatrick gone, they have no discernible strengths. (Pour one out for Howard.) It’s difficult to foresee much improvement out of them for the next couple of years.

Their draft capital will be crucial, as it was for the Browns. The Dolphins own three firsts and two seconds in 2020 and two firsts and two seconds in 2021. If they draft Justin Herbert or Tua Tagovailoa with the first overall pick in 2020, they’ll have their presumptive QB of the future. The difficult part will be restocking the cupboard. Tunsil and Fitzpatrick were foundation pieces, and Miami jettisoned various NFL-level players in addition to those two. It might be hard to find quality players at critical spots even with the picks they hold, given the general scarcity of elite left tackles and versatile defensive backs, not to mention pass-rushers and wideouts.

Tearing everything down could also make it difficult for a rookie QB to succeed and find confidence in his first year. We’ve seen future all-time greats at the position have trouble in their first seasons — Peyton Manning and Troy Aikman, to name a couple — but it would not be ideal to toss your prized rookie into the fire. It would be much more advantageous to capitalize fully on his rookie contract, which offers the Dolphins cap space to fill up talent more easily. The recent torching of the roster jeopardizes that future rookie contract window.

Grier has a plan, as far as we can tell, and he has made the conscious decision to rebuild with an unusual tenacity. We’ll get to watch the Dolphins be extremely terrible this year and perhaps contend for a winless season. How they approach the future will be even more interesting.