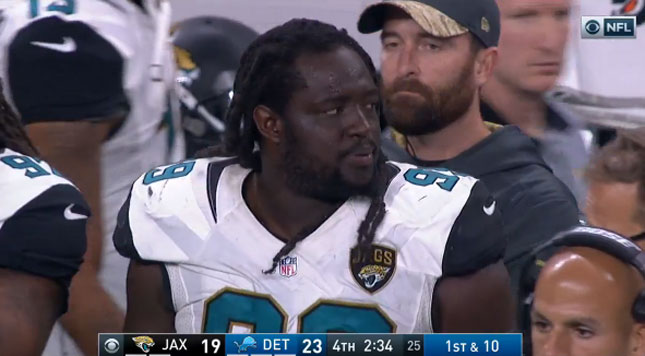 This Weekend in NFL Stupid highlights the dumbest decisions in football throughout the season. This week, we isolate one particularly stupid moment starring an eight-year veteran who should have known better.

Everyone in the stadium knew Detroit was trying to draw the Jaguars offside, except…

“[Watching] is not my game,” Marks told the Florida Times-Union after playing a season-low 23 snaps in a loss to the Houston Texans. “I’ve flat-out done a lot for this organization and to be slapped in the face — I was on the sideline for the majority of the game and I didn’t like it.”

Sunday in Detroit, Marks had a chance to prove he deserved to be on the field in key spots when he was out there with the Jags needing a stop, down by four with less than three minutes to play.

That’s when the most experienced defensive lineman on the roster did something unthinkably stupid by biting on a Detroit hard count on a 4th-and-2.

That gave the Lions a fresh set of downs and led to a Detroit field goal, extending the lead to seven points. Rather than getting the ball back down by four with two timeouts and about 2:10 to play, the Jags got it back down by seven with no timeouts and only 22 seconds remaining.

In other words, that might have literally cost Jacksonville the game.

This is just more evidence that the Jags are quite simply a stupid team.

“They’ve done it before on tape,” Lions quarterback Matthew Stafford said of using the hard count against Jacksonville, per the Times-Union.

“The story of this season is bone-headed plays and self-inflicted wounds,” added Jags cornerback Prince Amukamara. “Until we fix that, we’re not going to go anywhere.”

Other stupid things from Week 11

** Down by seven, the Titans settled for a field goal on a 4th-and-2 in the fourth quarter

You’re unlikely to kick three field goals in the final 13 minutes, so you’re going to have to score a touchdown eventually. Why eschew that opportunity on what should be a relatively simple 4th-and-short inside your opponent’s 30-yard line?

Tennessee’s focus should have been on tying the game now, rather than winning it with a touchdown later in the quarter. So in a way, Mike Mularkey was stupidly putting the cart before the horse here. But he was also ignoring the odds. A 4th-and-2 “gamble” is about a 56 percent proposition, but the odds were probably better for a Tennessee offense that was rolling. Sure, they made the field goal, but it seems silly to forgo about a 60 percent chance at extending a drive that could tie the game in order to attempt a field goal that would still leave you needing a touchdown (and the odds of making the kick were lower than 80 percent).

I have no doubt that the Titans had a much better chance of winning with a fourth-down conversion than with a field goal in that situation. How did Mularkey fail to see that?

About time we give this poor young bonehead his own section here. The 23-year-old Philadelphia Eagles wide receiver rarely gets through a Sunday without doing something really dumb. And this weekend, he had his biggest and most costly brain fart yet.

It looked like the Eagles had taken the lead over the juggernaut Seahawks on the road. Quarterback Carson Wentz hit Zach Ertz on a short screen pass that the tight end turned into a phenomenal 57-yard touchdown.

But the entire thing was wiped out. Why? Because Agholor was carelessly lined up too far off the line of scrimmage. His position coach, Greg Lewis, was screaming at him to move forward. The head linesman also tried to signal to Agholor that he was lined up illegally. He didn’t notice either of them, and his illegal formation penalty cost the Eagles a touchdown and all of their momentum. They’d instead have to punt, Seattle scored to add to its lead a few plays later, and the Eagles never really had a chance from that point forward.

To survive in this league, you simply have to be smarter than that.

The NFL’s stupidest team struck again Sunday, blowing a 10-0 lead in the final five minutes of a home game they were dominating. Two big reasons why that happened?

1. They had a 2nd-and-5 with a 10-7 lead with 3:16 to go. A first down would have pretty much iced the game, and Todd Gurley had a nice run on first down. But tight end Lance Kendricks committed a completely unacceptable false-start penalty, costing Gurley and rookie quarterback Jared Goff five crucial yards. Two plays later, they’d have to punt. Who knows what might have happened on that series had Kendricks not inexplicably flinched on what was probably a running play.

2. On the first play of the ensuing possession, for some reason defensive tackle Aaron Donald decided to smack Dolphins quarterback Ryan Tannehill well after he had thrown the ball, giving Miami 15 free yards on the game-winning drive.

The Rams are a real reflection of their coach.

Dude fails to challenge back-to-back bad spots on second- and third-down on a huge drive late in a tie game, goes for it on fourth-and-inches, finally does challenge the less-terrible-but-still-bad fourth-down spot and loses. The Texans turn it over on downs and five plays later the Raiders are in the end zone with the go-ahead touchdown.

Ensuing drive. Down seven. Fourth-and-five near midfield. Just over three minutes to play. Texans have just one timeout. And yet O’Brien opts to punt the ball away. Best-case scenario, you’re going to get it back deep in your own territory with no timeouts and 1:45 on the clock, needing a touchdown. But that’s only if you stop an offense that had scored two touchdowns on six fourth-quarter plays. How in the world are your odds better punting than gambling with a high-percentage play on fourth down?

It often feels as though coaches fail to consider the lack of downside with these types of “gambles” (quotation marks because they aren’t actually gambles at all). Look, if you punt, you need a three-and-out on defense but you’re sacrificing your opportunity to extend the drive. If you don’t punt, you have about a 40 percent chance of extending the drive but if you fail you can still get the ball back with that three-and-out on defense — just deeper down the field.

Essentially, by punting on a fourth-and-five down seven with 3:13 to play, Bill O’Brien was throwing away a 40 percent chance of extending the drive in order to have slightly better field position on a drive that might never happen. Think about just how stupid that is.