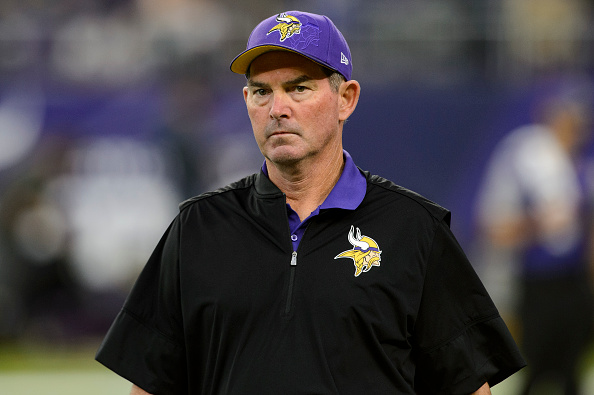 This Weekend in NFL Stupid highlights the dumbest decisions in football throughout the season. This week, we focus on an widely overlooked yet terrible crunch-time special-teams decision.

Why would the Vikings kick the ball into the end zone?

After Minnesota scored to take a three-point lead with 23 seconds remaining in a matchup with the Detroit Lions, Detroit was flagged for roughing the kicker on the PAT. That gave the Vikings a chance to kick off from the 50-yard line.

Considering that touchbacks now allow teams to start on the 25-yard line, the smart approach to that situation would have been for kicker Blair Walsh to launch the ball high and inside the 10-yard line. It didn’t have to be perfect. Just a 40-yard pop-up that would either result in a fair catch or a very short return. After all, a high 40-yard kick would give Minnesota’s coverage unit plenty of time to surround the return man.

But instead, Walsh did nothing with those extra 15 yards and pounded his kickoff into the end zone, giving the Lions the ball at the 25-yard line. Detroit then picked up 35 yards on two plays, barely getting into field-goal range for Matt Prater, who tied the game from 58 yards out. But had Walsh and the Vikes taken advantage of the penalty and actually applied strategy in order to bury the Lions inside the 15-yard line, that likely wouldn’t have happened, and Minnesota likely would have won the game.

This, ladies and gentlemen, is how you kick-off from midfield…

Instead, the idiot Vikings did this…

And it might have cost them a very important win.

What’s most annoying is nobody’s really talking about this, and I’m betting Mike Zimmer didn’t even give it thought. For all the hours they seem to work, NFL coaches sure overlook a lot in key situations.

Other stupid things from Week 9

** Miami picks a weird time to abandon the running game

The Dolphins still won thanks to the Jets’ ineptitude, but this could have hurt. Leading by four, Miami had a 2nd-and-6 at its own 24-yard line with just over six minutes left in the fourth quarter. Running back Jay Ajayi had just rushed for four yards on first down. And he’d rushed for 41 yards on his last seven carries. The Jets were not stacking the box. And yet Miami ran back-to-back passing plays. The clock barely moved and they punted the ball right back to the Jets, who immediately came down the field and took the lead.

Again, New York was a mess. That and Kenyan Drake’s fourth-quarter kick return score were the difference. But that was still some silly strategy from the Dolphins.

** The Giants pick a weird time to throw

I understand that the Giants were trying to put the game away by having Eli Manning throw a pass on a 3rd-and-4 with a five-point lead and 1:54 remaining in their matchup with the Philadelphia Eagles. But considering the many ways the Eagles have burned Big Blue over the years, it wasn’t worth the risk.

Manning had already thrown an interception in the quarter, and Philly was expecting a pass. In that spot, you hand the ball off or run a safe screen in an attempt to pick up four yards. And if you fail, the worst-case scenario involves the Eagles using their last timeout before receiving a punt inside their own red zone, down by four points with about 1:40 to play.

Instead, Manning took a chance and was intercepted.

The Eagles couldn’t capitalize with a short field and New York held on for the victory, but that was a stupid, unnecessary risk.

** The Jets neglect to use a timeout at this moment… 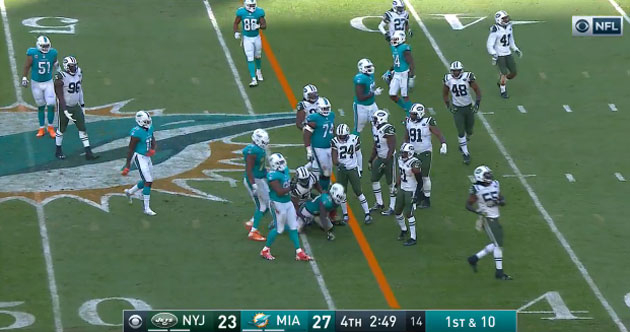 They had two remaining. Their best chance was to use their second timeout just as Ajayi’s nine-yard run came to an end. That would probably force the Dolphins to keep it on the ground on second- and third-down. With two stops and another timeout, you’ll have a chance to get the ball back at the two-minute warning.

Instead, Miami took a full 40 seconds off the clock here and ran an unsuccessful second-down play to take the game to the two-minute warning. The decision to wait might have only cost the Jets 10 or 20 seconds, but that could have easily been the difference between a win and a loss.

Fortunately (or unfortunately), that particular miscue isn’t what cost them. The Dolphins converted on third down anyway, thanks to a Jets penalty.

** The officials in Seattle decide this isn’t unnecessary roughness…

One play later, the officials also failed to reset the play clock, costing the Bills a five-yard delay-of-game penalty. The league admitted they erred in both instances.

… I do fault him for this play call: