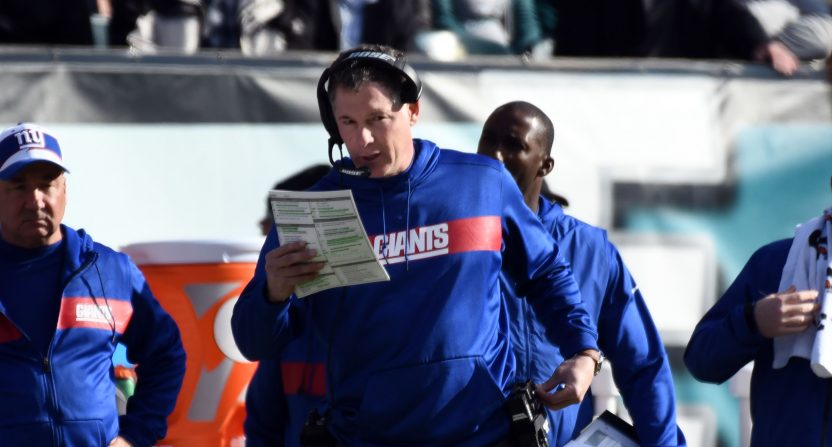 This Weekend in NFL Stupid highlights the dumbest moments and decisions in football throughout the season. Coming out of Week 12, we’re focusing on the latest example of disgusting timeout management.

It feels as though coaches have been misusing second-half timeouts this season more than ever. Just last week, the Packers were left with one timeout in crunch time against the Seahawks. And Mike McCarthy committed the same crime again on Sunday night. Two weeks ago, we ripped the Lions for leaving themselves in a similar situation. It’s just hard to fathom how often teams underestimate the importance of timeouts by using them in unnecessary situations.

But my favorite example of late came from Sunday’s Giants-Eagles tilt, where the Giants took a timeout in the second half of a one-score game prior to a 3rd-and-18 play at their own 29-yard line with more than 20 minutes remaining.

The play coming out of the timeout?

Was it worth it?

It rarely is, because the potential advantage gained from the chance to regroup during a timeout rarely is worth the potential problems that stem from losing a critical timeout.

In fact, you’d almost be better off sacrificing the entire play than wasting a timeout there. What’s a five-yard delay-of-game penalty when you’re facing such small odds of converting?

Third-and-18 is about a 5-10 percent proposition. You don’t use one of your three timeouts in a close game in order to boost your chances when facing such long-shot odds.

In that same half of that same close game, Pat Shurmur gave superstar rookie running back Saquon Barkley a grand total of five touches.

RB Saquon Barkley was kept out on the second drive of the second half. Pat Shurmur said the Giants were simply going to “spell him a little bit.” Barkley had 5 touches in the second half after 15 in the first half.

Jordan Reed has every right to be furious, clear hit to the helmet and it goes uncalled. Has to be frustrating, especially for a guy with a history of concussions. pic.twitter.com/v6EBmS2qNW

Who you throwing to, Lamar?

Ditto for you, Ben…

That's a BIG MAN game-winning INT for @ShelbyHarris93 and the @Broncos 😮 pic.twitter.com/NVYO4NAmVN

Frank Reich is pushing it…

#Colts. Will someone please rip the “throw to Andrew Luck” section out of the playbook. Please? pic.twitter.com/1I3jWEEJfm

Sorry, but does Baker Mayfield understand what the word “fired” means?

#Browns Baker Mayfield admitted he didn’t like Hue Jackson defecting to the #Bengals so soon. Gave him a chilly reception pic.twitter.com/hF480gMc7N

WHY ARE YOU EVEN NEAR THIS BALL? pic.twitter.com/HvvZGtOsTf

How in the world are we still awarding the defense the ball when an offensive team fumbles through the end zone? That rule should have been changed this offseason, but it wasn’t and it might have cost the Steelers a game on Sunday.

The Steelers ALMOST had a touchdown, but they fumbled it out of the end zone.

it's a touchback instead. pic.twitter.com/GxLlIFGnLi

The offense should, of course, retain the ball if the fumble isn’t recovered, but they should be penalized 10 or 15 yards. That’s a happy medium, because it wouldn’t be right to let them keep it at the spot of the fumble, but it also isn’t right to take possession away from them.