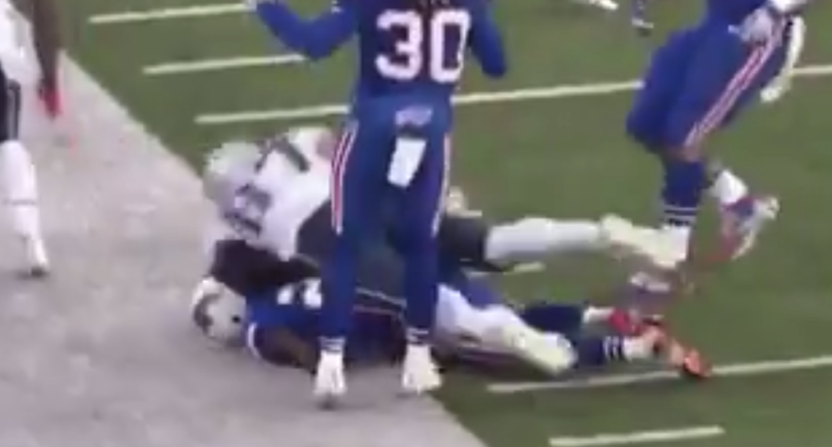 This Weekend in NFL Stupid highlights the dumbest moments and decisions in football throughout the season. And in Week 13, we start with the dumbass play everybody is talking about.

Everything about Rob Gronkowski’s temper tantrum

Many stupid things happen in the heat of the moment in games that are played at hyper-speed, but what’s really dumb about Rob Gronkowski’s forearm shiver to the head of an unsuspecting, defenseless opponent was that it took place well after the play had concluded.

A frustrated Gronk had two or three seconds to reconsider his childish response, and he took five steps after turning around before inexplicably body-slamming a player who weighs about 75 pounds less than he does.

Not only was it a dangerous head shot which caused a concussion, but it was also an illegal hit because it took place well after the play was over. It was a double whammy of stupid.

And it was made worse on Monday when the league suspended Gronkowski for just one game. Like that’ll make a difference.

Everything that happened in the Steelers-Bengals Monday nighter was stupid

Oh, and this dangerous illegal block from JuJu Smith-Schuster…

And this suspension-worthy head shot from George Iloka…

Only the #Bills would challenge this play saying #Brady was down by contact… pic.twitter.com/2LUa2x6Aua

Marcus Peters to the ref: “Yeah well, you can’t throw a flag if you don’t have a flag”

That is what an infant would do. Infants aren’t smart.

Derrick Henry has to know when to pack it in

The moment the Tennessee Titans running back picked up a first down at his own 30-yard line with just under a minute to play, he should have given himself up or run out of bounds. The Titans were leading by four, but the Texans were out of timeouts. So by running another 70 yards to the end zone, Henry was actually giving Houston an outside chance at a comeback.

Making matters worse, the Titans kicked the extra point rather than taking a knee, exposing themselves to the possibility of a two-point return which would have made it a one-score game. They could have faced a situation where they were forced to kick off from their own 20 (following a taunting penalty with an eight- or 11-point lead, which isn’t necessarily the end of the world but isn’t worth the risk.

Henry actually did the same thing in the same situation against the Colts in Week 6. I know it’s hard to not score when you can but when doing so decreases your win probability, you probably shouldn’t.

The Eagles coach, already down early to the Seahawks, sent the punt team out on a 4th-and-1 at midfield on Philadelphia’s opening offensive series. It was a wimpy call in a big road game, and it might have said something about Pederson’s confidence in one of the league’s highest-scoring offenses.