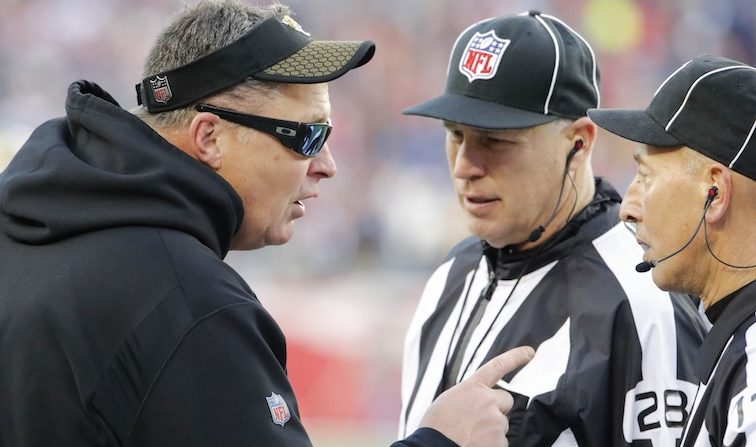 In the season’s penultimate edition of This Weekend in NFL Stupid, we focus on one stupid team and the stupid things it did, which explain why they’re resting in peace while the New England Patriots head to their eighth Super Bowl in 17 years.

Leading 14-3 with the ball in New England territory and four minutes remaining in the first half, the Jags were penalized for an illegal shift. It only happened because they rushed to the line of scrimmage and hurried a snap to avoid a potential New England challenge. The only problem was the previous catch (a stellar sideline grab by Keelan Cole) was just fine, and Patriots head coach Bill Belichick was standing right there. He wasn’t going to challenge, there was no reason to panic.

Three plays later, the Jags were penalized for a delay of game coming out of a timeout. Inexcusable, especially when it costs you a first down on what would have been a 12-yard completion to Marcedes Lewis. Those penalties left Jacksonville with a 3rd-and-long, leading to a sack and a punt.

Jacksonville then took two killer defensive penalties on a touchdown drive that let New England back into the game before halftime. Unnecessary roughness against Barry Church and pass interference on Jalen Ramsey handed New England 47 yards. Jacksonville is one of the least disciplined teams in football, and it really showed in this game.

Meanwhile, the Patriots drew only one penalty all game. OK, this one’s on the officials. Sure, there’s something to be said for discipline, but come on!

The Patriots were called for 1 penalty against the Jaguars

The Jags did at least get the ball back with 55 seconds remaining in the first half and two timeouts in their back pocket, but they got scared and took two knees to get to halftime. That’s not how you win on the road in the playoffs against a team that literally never loses at home in the playoffs.

On three consecutive sets of downs in the fourth quarter, the Jags went run-pass-pass. They clammed up and became too conservative and predictable, giving it to Leonard Fournette for a short gain before attempting two usually-safe-but-low-percentage Blake Bortles passes. They punted three times in the fourth quarter, barely eating any clock.

On Jacksonville’s final drive, they forget about Fournette. Six consecutive Bortles throws, despite the fact they had no reason to ditch the running game with nearly three minutes, three timeouts and the two-minute warning to work with. Just a young, inexperienced team showing that it wasn’t ready for the occasion.

Also in the Jaguars’ defense, the officials ruled live that Myles Jack forced and recovered a fumble before the call was upheld on review. What’s weird, though, is why that was the call on the field, but the play was whistled dead after Jack recovered. Jack would have probably scored, but instead the ball came back to the spot of the fumble recovery and the Jags went three-and-out. The Patriots were in the end zone five minutes later. If that’s ruled correctly live, the Jags are probably Super Bowl-bound.