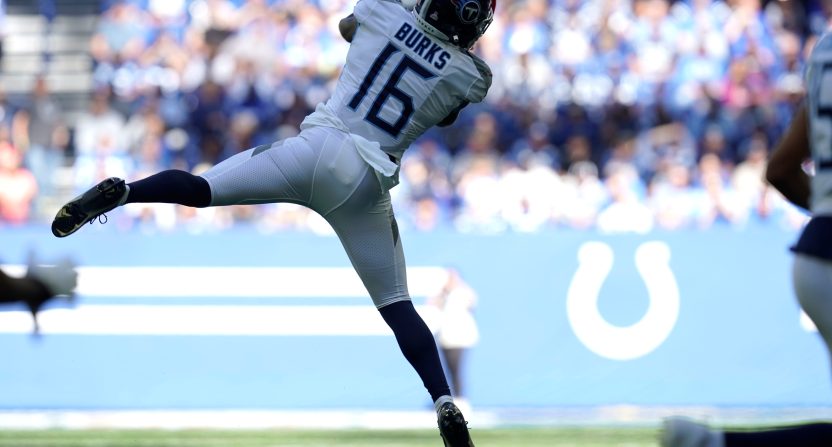 Some bad news came for the Tennessee Titans Sunday.  Their 2022 first-round draft choice, wide receiver Treylon Burks, was carted off the field.

Burks suffered a foot injury during the Titans’ game against the Indianapolis Colts Sunday, in the fourth quarter. There’s no word yet from the team about how serious the injury is.

#Titans first round pick (No. 18 overall) WR Treylon Burks is being carted off the field. pic.twitter.com/32nufkCw4d

Burks (seen above making a catch earlier in Sunday’s game) had only eight catches for 115 yards this year heading into Sunday’s game. But he had averaged about 14.4 yards per catch. He was going to be counted on to help bring balance to this Titans’ offense, which has struggled the first few weeks of the season.

The former Arkansas wideout was one of the best wideouts coming out of college last year, which is why the Titans took a chance on him.

But if he is gone for a long period of time, who can the Titans rely on at wide receiver to take his place?  It looks as if they are once again going to have to rely on the running game and Derrick Henry.

Henry hasn’t had a big breakout game yet so far this season. He has only rushed for 192 yards and two touchdowns. But the Titans are going to need him down the stretch if their best young wide receiver is out for a long period of time.

[Photo from The Indianapolis Star, via USA Today Sports]