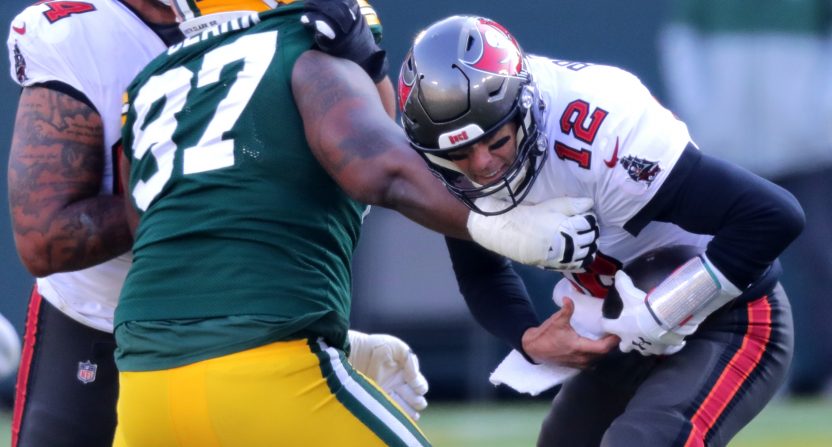 After a brilliant touchdown to close out an equally brilliant first half, Tom Brady has not kept up his typical playoff heroics in the second half against Green Bay.

Up 21-10 heading to the third quarter and up 28-10 after a quick third quarter touchdown, Brady has now thrown three pretty bad interceptions in the second half, which have helped Aaron Rodgers and the Packers get back into the contest. The first was just brutal, with Brady floating a ball deep into double coverage. Green Bay safety Adrian Amos has probably never had an easier pick in his career:

Tom Brady has been mostly great today, but this was an arm punt. pic.twitter.com/TNtoQ5ev2V

That led to a Green Bay touchdown, though they didn’t complete the two-point conversion.

To the surprise of nobody, the Packers are right back in this game. Bucs' lead down to 28-23 (Green Bay had a bad drop on the 2-point try). pic.twitter.com/UaZ8nVYdcH

Brady moved the Bucs down the field on their ensuing drive, only to throw too high to Mike Evans near the goal line, leading to another Packers pick:

The Bucs had a great chance to go up at least 8, and instead it's Tom Brady's second interception of the game. pic.twitter.com/Gx8hEl8iFK

Tampa forced a stop, and then facing third and two, Brady once again heaved what was essentially an arm punt, which Mike Evans never even saw in the air:

Tom Brady is arm-punting the hell out of the second half. pic.twitter.com/SnIkeKuKiE

That’s three consecutive drives to end with a Brady interception, and all of them were on him. That’s the kind of play you never expect from Brady at all, especially with a trip to the Super Bowl on the line. But again, he is 43 now, and while he’s certainly been the main reason the Buccaneers are in this position, we’re seeing signs that he’s just not the player he used to be.