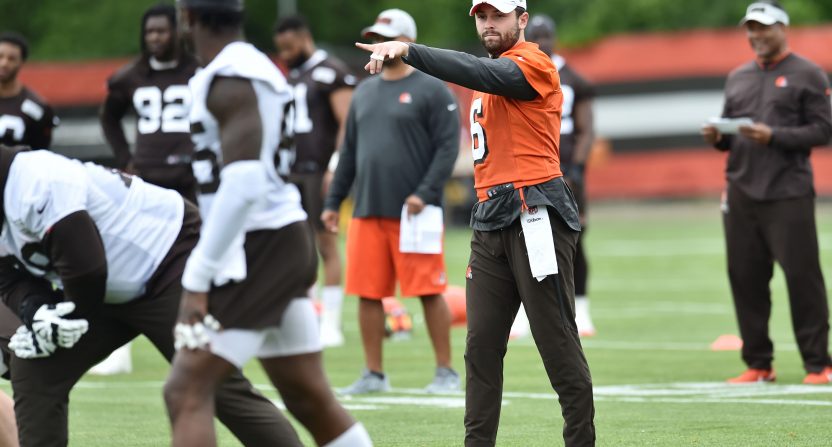 The National Football League can be a soap opera. He said vs. he said. Backstabbing, bickering, and finger pointing. Divas in cleats. Players don’t save the drama for their mamas.

Here are the top five teams with the most potential for turmoil:

Is Aaron Rodgers both the solution and problem for the Green Bay Packers? Seems ridiculous. Tom Brady is the NFL’s most successful quarterback, but you can make an argument that Aaron Rodgers is the greatest quarterback. His ability to consistently win despite a marginal supporting cast and questionable coaching was amazing.

But everything imploded last year during a 6-9-1 season, costing former head coach Mike McCarthy his job. Everyone knew the Rodgers-McCarthy marriage was strained. But we didn’t know how bad it was until Bleacher Report’s bombshell deep dive that dropped in April.

The article alleges that Rodgers undermined McCarthy by ignoring his play-calling. That story also painted a picture of the star quarterback as being overly sensitive and critical. There are a bunch of other allegations, including McCarthy getting massages instead of attending meetings, and former general manager Ted Thompson falling asleep during meetings.

McCarthy and Thompson are gone. But according to Bleacher Report, Packers president Mark Murphy called Rodgers to tell the quarterback that Matt LaFleur would be the next Green Bay head coach.

“Murphy made it clear that Rodgers would need to accept coaching. ‘Don’t be the problem.”

In a “bad” season, Rodgers passed for 25 touchdowns with 2 interceptions. With better coaching and better talent, perhaps all will be forgiven and forgotten.

True leadership risks unpopularity so perhaps there is a method to this madness. But it’s difficult for any reasonable pundit to see. The New York Giants used to be one of  the premier franchises in terms of stability and success. They have won a Super Bowl in every decade since the 1980s. However, the team’s moves in recent years have been puzzling.

The drama existed before cartoonish GM David Gettleman arrived in 2018. Maybe owners John Mara and Steve Tisch are to blame. Management’s insistence on playing washed Eli Manning is astounding. Does winning a pair of Super Bowls guarantee you to a starting job forever? Former Giants head coach Ben McAdoo was right to bench Manning in 2017 – and that move probably cost him his job.

Manning has been below average for the past two seasons. What does Gettleman do? He throws gasoline on this fire by trading away the Giants’ best and most popular player, Odell Beckham Jr., soon after saying that he wasn’t going to deal the wide receiver. Then Gettleman reaches in the draft for a quarterback that virtually nobody thought was worthy of the No. 6 overall pick.

Maybe rookie Daniel Jones will turn out to good. However, New York might not start him in 2019 – which would be a total waste. As bad as last season was for the Giants (5-11), this year could be even worse.

No more Antonio Brown. No more Le’Veon Bell. But guess who’s still there? The Steelers’ biggest diva is Ben Roethlisberger. He gets a pass because he’s a two-time Super Bowl champion. But Roethlisberger seems like a major pain in the arse. At best, he’s a 37-year-old who has difficulty connecting with younger players. At worst, he’s a lousy teammate. Roethlisberger blamed Brown for a late-game interception against Denver. Former Steelers player and coach Joey Porter described Roethlisberger as selfish and a bad leader. Plus, there are allegations that Roethlisberger intentionally fumbled in a game.

The company line: Pittsburgh is better without Brown and Bell. And certainly, the Steelers have earned the benefit of the doubt. James Conner filled in nicely for Bell. JuJu Smith-Schuster seems poised to be a No. 1 receiver. The Steelers have an excellent track record of developing wideouts (Brown and Smith-Schuster weren’t first-round picks).

But management took some risk when they decided to give Roethlisberger a new contract rather than pay Brown and Bell. Yes, Roethlisberger passed for an NFL-high and franchise record 5129 yards, but will he age gracefully without them? And who will he blame if his performance dips? Is he going to threaten to retire again?

Managing this circus is Mike Tomlin, whose reputation has taken a hit in recent years. What’s worse? The Steelers could be the third-best team in the AFC North.

There’s no way to minimize this. Was it philosophical and irreconcilable differences? A coup? Both?

Who the fires a general manager in May? The Jets! It’s almost like they saw what was happening with the New York Giants and were jealous of the tabloid attention. “You think Gettleman is nuts? Hold our beer.” A coach and a GM having a power struggle is nothing new. But it virtually never happens when that coach has been just been hired (presumably) by that general manger. It makes you wonder how much ousted GM Mike Maccagnan was involved in the first place.

Then there is Gase complaining about the contract of free-agent acquisition Le’Veon Bell. Awkward. If Gase had a proven track record, this could be excused or overlooked. But he went 23-25 in three seasons at Miami before being canned. Maybe the Jets think they have the next Belichick who was 36-44 with the Cleveland Browns. Doubtful.

Those crazy eyes should’ve warned us.

Here’s a sentence that hasn’t been written in decades: The Cleveland Browns will enter the season as the league’s top story. The Browns could be contenders. They have better Super Bowl odds than the Dallas Cowboys and Pittsburgh Steelers. Whoa! They reek of boom-or-bust potential. The hype alone makes them No. 1 on this list. When you add in Baker Mayfield and Odell Beckham Jr., this is a combustible mix. Handle with care.

Mayfield is still (for some weird reason) feuding with Colin Cowherd. Dude. You’ve already won. Don’t beef down. Cowherd’s just egging you on for his own ratings. Then there’s Beckham, one of the few non-quarterbacks who is recognized outside of sports. He loves attention. He also loves touchdowns (44 in 59 career games). As long as he keeps scoring, he can propose to as many as many kicking nets as he wants to. The pizza box incident is disturbing, but if he’s healthy and in the lineup, no one will care. We haven’t even gotten to Kareem Hunt, who’s suspended for the first 8 games due to a violation of the league’s personal conduct policy.

Buckle up folks. This season is going to be a wild ride.