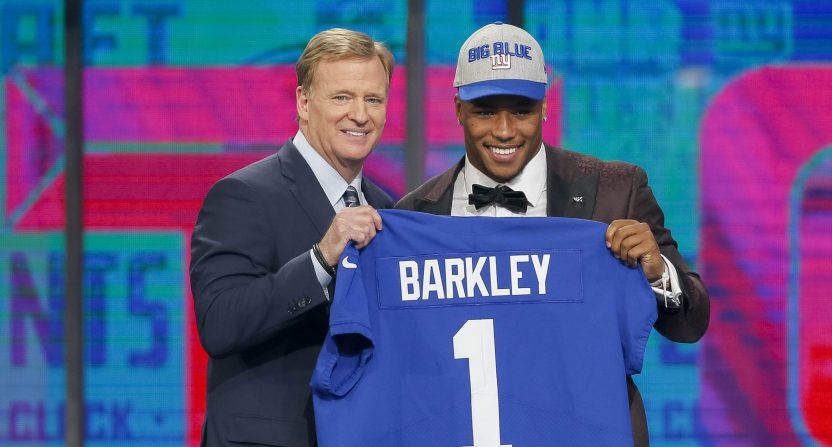 With the 2018 NFL Draft in the books, we have a better feel for which rookie players could make an immediate impact for your or someone else’s fantasy football team.

Here are 10 first-year offensive players who are certainly or probably worth drafting this summer.

1. New York Giants RB Saquon Barkley: In terms of fantasy points, three of the top eight backs in football last season were rookies (Kareem Hunt, Alvin Kamara and Leonard Fournette), and top-five running back Ezekiel Elliott led the league in rushing in 2016. Barkley might make a bigger impact than all of those guys.

2. Seattle Seahawks RB Rashaad Penny: You don’t use a first-round pick on a running back these days unless you think that back can and will make an impact immediately. Coming off a 2,383-scrimmage-yard, 25-touchdown senior season at San Diego State, the NFL-ready Penny has the skill set to become an every-down back from the get-go.

3. Carolina Panthers WR D.J. Moore: The size/speed combo prospect out of Maryland should have plenty of opportunities to steal reps from Devin Funchess and Torrey Smith in a Panthers offense that is begging for a top receiver.

4. Washington Redskins RB Derrius Guice: There are apparently some off-the-field red flags, but the fact is Guice is a first-round-caliber back who dropped into Round 2. Guice showed off his superb vision while averaging 7.6 yards per carry when he was last fully healthy in 2016, and he followed that up with a strong 2017 season despite playing through multiple injuries at LSU.

5. Denver Broncos RB Royce Freeman: Somebody is likely to emerge from Round 3 the way Hunt and Kamara did last year, and Freeman — who averaged 5.9 yards per carry during his four years as a starter at Oregon — might not require much time to become a regular for a team that cut C.J. Anderson earlier this offseason.

6. Dallas Cowboys WR Michael Gallup: Dez Bryant is gone and Gallup could have plenty of opportunities to fill some of that space coming off back-to-back 1,200-yard seasons at Colorado State.

7. Jacksonville Jaguars WR DJ Chark: The Jags have openings in prime pass-catcher spots, and Chark is a speed demon who might lack consistency but could still become a big-time playmaker early on.

8. Atlanta Falcons WR Calvin Ridley: Not sure he’s ready to make a huge impact as a rookie with that slight frame in a place like Atlanta, but the first-round pick out of Alabama is worth a flier as a guy who could emerge for Matt Ryan in the slot.

9. Arizona Cardinals QB Josh Rosen: While Josh Allen will need some time in Buffalo and Sam Darnold and Baker Mayfield won’t have a lot of support if they earn starting jobs in New York and Cleveland, the NFL-ready Rosen should eventually get a shot in place of the injury-prone Sam Bradford in Arizona. And when he does, he’ll have Larry Fitzgerald to throw to.

10. Cardinals WR Christian Kirk: Meanwhile, Rosen and/or Bradford will need somebody to throw to in addition to Fitzgerald. Kirk should have a lot of early opportunities as a second-round pick coming off three strong seasons in the SEC.