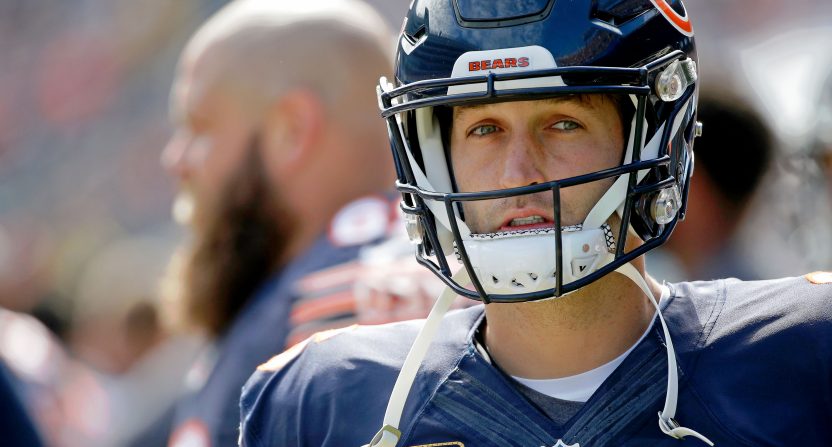 After spending his first three seasons in the NFL with the Denver Broncos and developing into one of the league’s top young quarterbacks, Jay Cutler was told by the Broncos in 2009 that the team had traded him to the Chicago Bears in exchange for veteran quarterback Kyle Orton and a few draft picks.

After Denver selected him with the 11th overall pick in the 2006 NFL Draft, Cutler developed his skills under the leadership of legendary Broncos head coach Mike Shanahan. But after Denver fired Shanahan and hired Josh McDaniels in 2009, the quarterback wanted nothing to do with the team and their cocky new coach.

So he was sent to the Bears, where he spent the final eight years of his career in the league and progressed into the walking enigma that he is now known as today.

His first season in Chicago did not go too amazingly as Cutler finished the year as the NFL’s leader in interceptions with 26 and the Bears missed the playoffs for the third straight season. But over the next three years, Cutler led Chicago to wins in 68 percent of the games he started and even helped the team get all the way to the NFC Championship against the Green Bay Packers in 2010.

However, what happened during that game versus the Packers was the beginning of the end for Cutler’s career in the league.

After one half that day, the Bears were down 14-0 to Green Bay and Cutler was not playing his best, to say the least. Chicago started with the ball on offense to begin the second half, but the Bears and their quarterback only managed to gain a total of six yards before they were forced to punt the ball away to the Packers.

After Chicago forced a Green Bay turnover on the very next drive, it was now time for Cutler to get back on the field and take another shot against the Packers’ defense. However, Bears backup quarterback Todd Collins trotted onto the field and Cutler remained seated on the team’s bench.

He stayed off the field for the rest of the day and Green Bay ended up holding on to win the game 21-14.

Afterwards, Cutler was criticized by Chicago’s fans, the local media, and even other players around the NFL for what they interpreted to be quitting on the team against the Packers. It was later revealed that  the quarterback actually suffered a Grade-2 MCL sprain and he would have likely missed the Super Bowl if the Bears had actually been victorious in the NFC Championship.

Cutler was accused of not showing enough emotion or care for the fact that he could not get back out on the field and help his team. But knowing what we know now about the quarterback, he just had a different way of dealing with certain situations than the average, super-hyped NFL player did.

It also may have had something to do with the fact that he was still learning how to manage his career while dealing with the symptoms of suffering from Type-1 diabetes (a diagnosis he was given in 2008). Some studies have shown that the effects of Type-1 diabetes have been known to cause differences in one’s behavior, no matter what the situation may be.

Surprising to some, that 2010 season was the first and last time that Cutler would play in a playoff game. Despite the upward progression he experienced while with the Broncos, the quarterback saw his on-field performance take steps in the wrong direction during his time with Chicago.

During the months following the Bears’ loss in the NFC Championship, it was revealed that Cutler and his girlfriend, reality TV star Kristin Cavallari, had become engaged less than a year after they started dating. The two ended up getting married in 2013 and their relationship has been filled with babies being born, anti-vaccination discussions, and photos of Jay’s behind in Mexico.

Now that Cutler is venturing into a new career that will have him critiquing his peers inside a broadcast booth, his time on the field will likely be remembered for what he was unable to accomplish. Few will look back on his NFL career and remember the six games that he finished with four touchdown passes, or the 26 games where he threw for at least 300 yards, or even his 21 fourth quarter comebacks.

Instead, the next generation of NFL stars will likely only know Cutler as that guy from the memes that always portrayed him smoking cigarettes on the sidelines and not giving a damn.