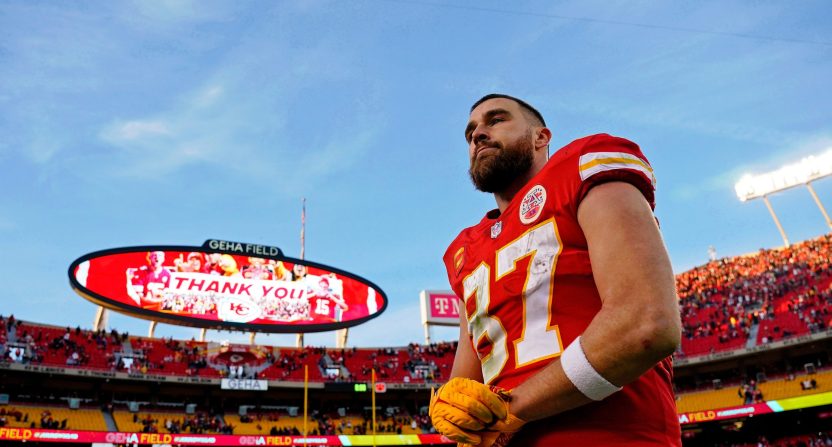 Travis Kelce is one of the best tight ends in the NFL. The Super Bowl champion and three-time first team All-Pro player currently makes on average $14 million per year and some people feel he should be making more.

For instance, San Francisco 49ers tight end George Kittle had a strong reaction to Kelce’s contract status saying it “boggles my mind” that Kelce is making that much in comparison to the top wide receivers making double that.

Kittle has a point. The top tight ends are essentially receivers at this point while at the same time they have the responsibility to be on the offensive line to be an extra blocker when called upon. And with so many top receivers getting top dollar over this offseason, the disparity of pay is growing.

Kelce was asked about Kittle’s comments and while he’s appreciative of Kittle’s perspective of the situation, he had his reasons to make what he makes. Namely, he wants to make the Chiefs better and the money isn’t a priority to him.

“I appreciate Kittle saying that,” Kelce said. “That’s my guy and he always wants to see every tight end get paid as much as their production is. But at the same time, I signed my contract understanding what I had. I put a lot into this, man. Money, in my mind, is almost secondary at this point in my career. I’m here for the legacy and I’m here to try and make the Kansas City Chiefs the best team possible. So that’s my main focus. That’s why I’m here.”

It’s difficult to criticize either point of view. It’s up to each individual player what motivates them to play. For some it is money and maximizing their value while they still have that in order to ideally set themselves up for retirement. For others it’s the rings and while they’re not willing to play for free, they are willing to take a little bit less to play for a contender and/or allow some of that cap money to be used on others.

On the other hand, Kittle’s point is that Kelce deciding not to go for top dollar can affect more people than just Kelce. He might be fine with not making as much as he could but that might hurt Kittle’s negotiating power because the 49ers can point to Kelce’s contract and argue that’s the going rate for a top tight end. It’s certainly a delicate balance that requires a lot of nuance and context that many fans and media will likely oversimplify on social media.