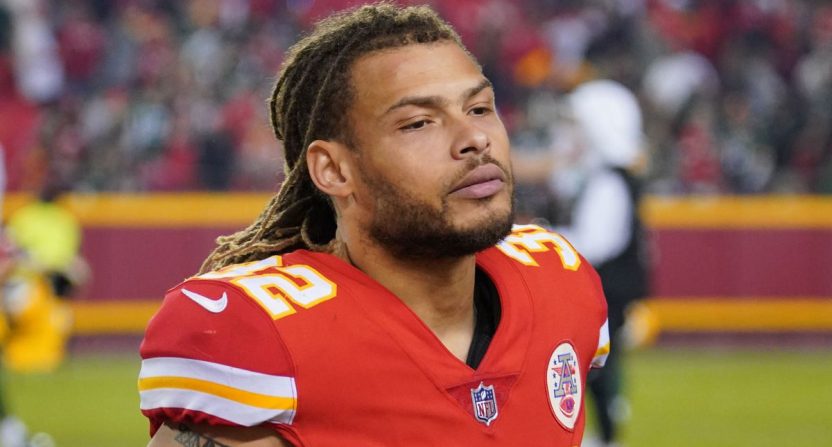 The Kansas City Chiefs are set to take on the Cincinnati Bengals in the AFC Championship Game this Sunday and the Chiefs could be getting a key piece on their defense back at the perfect time.

Chiefs safety Tyrann Mathieu returned to practice yesterday, which is a great sign after sustaining a concussion early in last week’s game against the Buffalo Bills.

#Chiefs: Tyrann Mathieu was back at practice today. He's been in concussion protocol.

Mathieu was at practice on Friday as well and is listed as questionable for the game, though all signs point to him being able to suit up on Sunday.

Chiefs head coach Andy Reid had this to say about Mathieu’s status despite still being in the NFL concussion protocol.

Andy Reid said Tyrann Mathieu is still in the NFL's concussion protocol, although he did participate in today's practice.

"We think he'll be ready to roll," Reid said of Mathieu.

Mathieu is one of the most important players on the Chiefs’ defense and it would be a huge plus if they were able to have him back.

Just how impactful is #Chiefs S Tyrann Mathieu? L'Jarius Sneed says that Mathieu calls out what's happening before every snap on the defensive side of the ball. Adds that Mathieu is always right too.

#Chiefs S Tyrann Mathieu (concussion) is on pace to play Sunday and that’s important. KC has struggled in the snaps Mathieu has missed this season. Both in the pass (attached chart) and run game (below)
– Mathieu on-field 4.6 YPC
– Mathieu off field 5.4 YPC pic.twitter.com/fGv5nbpfFz

Tyrann Mathieu’s absence is being felt. Take an All-Pro off the field and you’ll notice it.

Despite this, the Bengals come into this game as 7-point underdogs to the Chiefs in what hopefully will be an exciting game for the viewers at home.