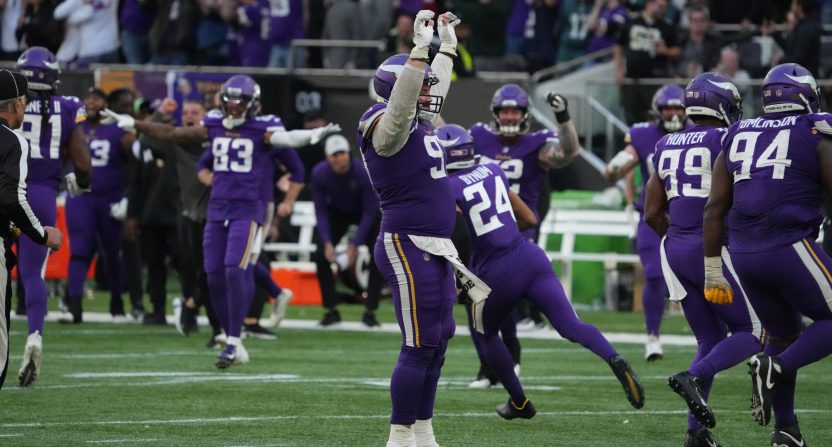 The Minnesota Vikings and New Orleans Saints finished Sunday’s game in London with a crazy fourth quarter and a final play that sent one announcer into hysterics.

As the clock expired, Saints kicker Will Lutz double-doinked the ball off the upright and then crossbar on a 61-yard field goal attempt that would have tied the game. The Vikings (3-1) prevailed 28-25 to drop the Saints to 1-3.

Will Lutz 61-yard FG attempt hits off the crossbar twice and misses.

Perhaps no one was more excited than famed Vikings’ radio play-by-play announcer Paul Allen, who went ballistic on the call.

The game proved largely uneventful through the first three quarters. But the Vikings and Saints combined for 23 points in the fourth quarter at Tottenham Hotspur Stadium to fire up the crowd. Lutz even nailed a 60-yard field goal late in the game to tie the score. Greg Joseph gave the Vikings the lead for good with a field goal with 24 seconds remaining.

That set the stage for the final play. NFL fans were buzzing on Twitter about the thrilling finish — and Allen’s call.

DOUBLE DOINK! Will Lutz from 61 to tie the game. Vikings win 28-25. pic.twitter.com/sKbbVLZpcc

“Sippin on the Saints tea(rs),” the Vikings tweeted.