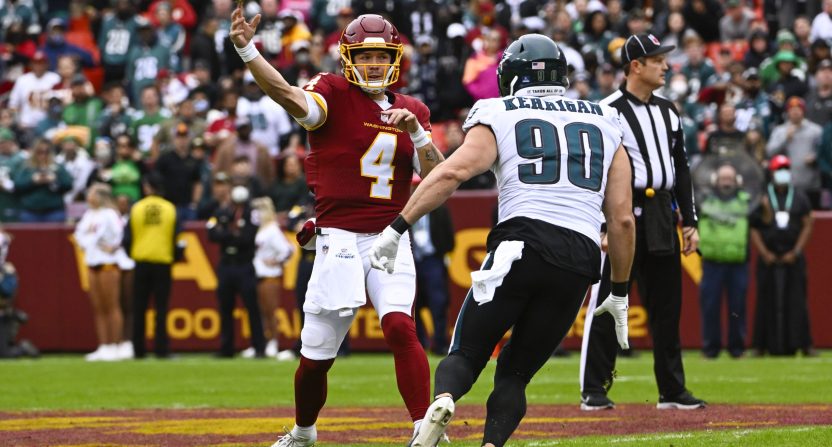 One of the most underrated linebackers of the past decade has been former Washington Commanders star Ryan Kerrigan, who played for the organization from 2011-2020. Kerrigan owns the team record for the most sacks as a member of the organization. He made an announcement on Friday that will cement his role in Commanders’ history.

After 11 years in the NFL, Kerrigan announced his retirement from the league. He signed a one-day contract with Washington so that he can retire as a Commander. He spent last season with the Philadelphia Eagles

The Commanders’ social media team posted a touching tribute for the former star, thanking him for his time with the organization.

.@RyanKerrigan91 is officially retiring a member of the Burgundy & Gold

Thank you for everything and congratulations on an amazing career! pic.twitter.com/ysee8ESI6x

Kerrigan saw his production and playing time on the field decline drastically over the past few seasons, starting only three games between the 2020 and 2021 seasons.

He ultimately finished his career with 95.5 sacks, which currently ranks 73rd in league history. That, and his four Pro Bowl appearances, likely make for at least a borderline Hall of Fame-caliber resume.

The veteran linebacker never quite got the respect he deserved in the NFL as one of the best pass rushers in the league. But many around the NFL world took to social media Friday to congratulate Kerrigan on an excellent career upon his retirement.

Break out the tissues! What a career for Ryan Kerrigan! https://t.co/v51oDGb2Ev

The Washington organization has given us very little be be happy about. Getting to root for Ryan Kerrigan, however, was one of the few rays of sunshine in an otherwise reoccurring maelstrom.

He was wonderful on and off the field. Respect. https://t.co/rBYFkEQoBI

Congrats to Ryan Kerrigan on a great NFL career. One of the best pass rushers in Redskins history. A pillar of production, durability and class. #Commanders

One of many many manymanymany examples of Ryan Kerrigan's impact on everyone around him https://t.co/TJbIisvvPs

There has not been all that much to be excited about as a fan of the Commanders for years now, but Kerrigan was one of the most exciting players in the history of the organization.

Kerrigan was currently not under contract anywhere. It was expected that he would be a candidate to sign with a team after training camp ahead of the upcoming NFL season. But it seems like he is at peace with his NFL career coming to an end.