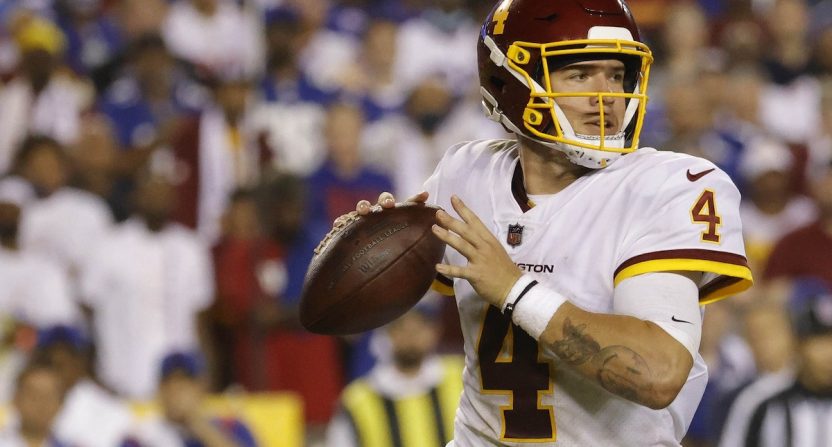 Taking over as the Washington Football Team’s starting quarterback following Ryan Fitzpatrick’s hip injury, Taylor Heinicke was outstanding in a Week 2 win over the New York Giants. The fourth-year veteran completed 74 percent of his passes (34-for-46) for 336 yards and two touchdowns, leading the game-winning drive in a 30-29 victory last Thursday night.

Heinicke figures to be Washington’s starter for at least the next five games, maybe seven or eight, depending on how Fitzpatrick recovers from the partially dislocated hip he suffered in Week 1’s game against the Los Angeles Chargers. And if he performs well, Heinicke could be the starter for the rest of the season.

Being a starting NFL quarterback could bring some endorsement opportunities. Heinicke certainly seems to think so and is angling to endorse one product in particular: Heineken beer.

Taylor Heinicke just posted this on his Insta story. The dude is on a life heater right now pic.twitter.com/hFFLgcQP2A

When asked how he spent a free weekend after playing Thursday night, Heinicke just so happened to mention that beverage.

“I watched a lot of college football, a lot of NFL football,” Heinicke told reporters, according to NBC Sports Washington. “Had a couple Heinekens. A lot of resting, it was a nice, relaxing weekend.”

Along with Heinicke himself, plenty of people have suggested such a connection. Who doesn’t think of Heineken when hearing Heinicke’s name, even those who don’t drink beer? The names sound too much alike.

So far, the Dutch lager company hasn’t shown any interest, though Heinicke says Heineken tried to send him a 24-pack after the Tampa Bay playoff game. To be fair, they might be preoccupied at the moment with the promotional campaign tied to the new James Bond movie, No Time to Die.

But Heinicke joked that he may start mentioning Bud Light in hopes of getting an endorsement deal. Heineken’s loss could be Anheuser-Busch’s gain.

If Heinicke continues to play well as the holidays approach, perhaps there’s an opportunity for Heineken to get him into one of its Christmas ads. Those are often entertaining. And Heinicke might be a less expensive spokesperson than, say, Benicio Del Toro. Couldn’t the Washington Football Team quarterback be part of a new commercial celebrating The Holiday Five-Pack?

Coach Ron Rivera and general manager Martin Mayhew arguably should’ve gone with Heinicke as their starter for the 2021 season, especially coming off an impressive performance in the NFC Wild Card Playoff game versus the Tampa Bay Buccaneers. Against the eventual Super Bowl champions, Heinicke threw for 306 yards and a touchdown while also rushing for 46 yards and another score.

But considering Heinicke had only eight games of NFL experience, it’s understandable that Washington wanted some veteran insurance for stability at such an important position. Robert Griffin III has noticed a possible opportunity and even though he’s currently a college football and NFL analyst for ESPN, his contract allows him to leave if he has a chance to play somewhere.

Just don’t interfere with Heinicke getting a Heineken endorsement. Such a fun connection needs to happen. If he keeps playing well, we just might see it.