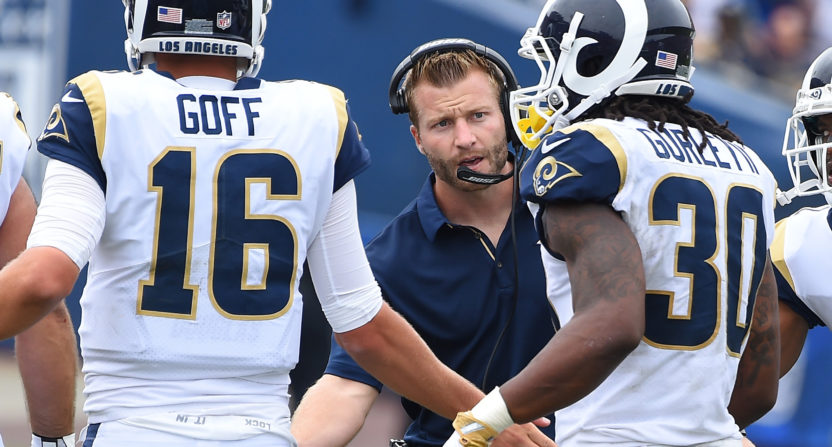 Shortly after the Philadelphia Eagles beat the New England Patriots 41-33 to win Super Bowl LII, the Westgate sportsbook in Las Vegas released their odds for next year’s Super Bowl. Yes, odds for a game that won’t happen for a year, and before offseason moves could greatly change how we view some teams.

And we’re going to take a serious look at those odds anyway, because why not?

We’ll start with the Super Bowl LIII favorites: the team that just lost this year’s Super Bowl. The New England Patriots are currently 9-2 to win next year’s title, even though Tom Brady turns 41 in August (and seeing as how he just won the NFL MVP, before throwing for 505 yards in the Super Bowl, it’s hard to doubt him yet).

The defending champion Philadelphia Eagles are next, at 6-1 odds. They should have a healthy Carson Wentz back (and it doesn’t seem to matter who they put back there these days anyway).

The Pittsburgh Steelers have the third-best odds at 8-1, while the Minnesota Vikings and Green Bay Packers both come in at 12-1, and the Atlanta Falcons and New Orleans Saints are both at 16-1.

The seven teams mentioned are the only teams with better than 20-1 odds. At the very bottom with 100-1 odds are the Chicago Bears, Cleveland Browns, and New York Jets.

While it’s unusual to have as many surprise great teams at the 2017-18 season, surprises do happen on an annual basis. There are teams in these 2019 odds that will do better — and perhaps significantly better — than their current odds would indicate. Identifying those teams is the hard part. Vegas does their homework more than anyone, and they have excellent reasons for giving these teams the odds they have.

But I’m going to take a look at five 2019 Super Bowl odds that I feel look fairly attractive on the surface. A couple of these are longshots, but the main point here is *looking for value and potential* in the odds. And you can scroll all the way down for every team’s odds.

All aboard the Jimmy G train! Okay, so this one isn’t even a “sleeper” pick as only seven teams have better odds (six teams are at 20-1). And it may seem crazy to have this much confidence in the 49ers after they were 300-1 odds (!) this time last year. But that’s how much I’m buying the Jimmy Garoppolo 49ers, and what they can add around him this offseason.

The 49ers were a 1-10 team when Garoppolo took over as starting quarterback. They went 5-0 with him. He led them to a 44-point performance against the awesome Jacksonville defense. San Francisco looked legitimately good with Garoppolo at quarterback, and now he gets a full offseason to work with the team and get a full grasp of Kyle Shanahan’s offseason (remember, Garoppolo wasn’t acquired until midseason).

Additionally, the 49ers will have approximately $115 million in cap space this offseason, as a now very appealing destination. They should be able to land a few very good free agents, and they have the No. 9 pick in the upcoming draft. The 2018 roster should have much more talent, and they still looked as good as just about any team with Garoppolo at quarterback down the stretch.

In Sean McVay’s first season as head coach, the Rams went from a 4-12 team to an 11-5 team. Jared Goff went from looking like a total disaster and bust at quarterback, to throwing 28 touchdowns, just seven interceptions, and finishing fifth in the NFL in passer rating at 100.5. Those are superstar numbers, and Goff will be only 23 years old when the 2018 season begins.

The Panthers just went 11-5 and Vegas thinks they have worse Super Bowl chances than 16 teams? They won at New England. They beat the Vikings and the Packers (with Aaron Rodgers). They barely lost their playoff game at New Orleans.

This is all while Cam Newton had just an 80.7 passer rating and threw 16 interceptions. He will likely be better next season and Carolina should remain a very dangerous team.

Do you think the Broncos will sign Kirk Cousins? As of Friday, Bovada certainly did.

Bovada on where Kirk Cousins signs:

And if you do think so, the Broncos should have much better than 50-1 odds. The defense isn’t near what it was in its Super Bowl run, but it’s still a good unit led by Von Miller. Add Kirk Cousins to this team, look to make a few more upgrades on both sides of the ball, and it’s easy to see how the Broncos could quickly go from looking bad to good.

John Elway is always aggressive and will likely do everything he can to get Cousins (or another good quarterback) into Denver to try to maximize their contention window with the defense.

The Bears should be on the bottom half of the list, but 100-1 with the Browns and Jets? That seems a bit much. Chicago’s offense was held back by head coach John Fox and offensive coordinator Dowell Loggains. They completely lacked creativity, with running back Jordan Howard even saying over the last few days that opposing defenses “knew what was coming pretty much every play.”

Former Chiefs offensive coordinator Matt Nagy takes over as head coach in Chicago, and will also take over the playcalling duties. His offense in Kansas City was very creative and did a great job to make the most out of Alex Smith’s skillset. He should be able to do the same with Mitch Trubisky, who’s also a mobile quarterback like Smith that is at his best with run-pass options and being on the move.

Trubisky was very inconsistent as a rookie, but that was to be expected with the bad playcalling and scheming, a receiving corps that the CFL may laugh at, and little college starting experience. He showed flashes of an impressive all-around skillset weekly. And now he gets to work with a coach that understands modern offenses and how to get the most out of talented playmakers like Tarik Cohen (Tyreek Hill traits) and Adam Shaheen (Travis Kelce traits).

The Bears will definitely upgrade their pass-catching options via free agency and the draft (they have the No. 8 overall pick). Additionally, Chicago had an underrated, top-10 defensive unit.

If you’re looking for a quarterback/team to make the Carson Wentz/Eagles and Jared Goff/Rams kind of jump next season, the Bears could very well be it. Now, it’s even more likely that they remain bad, but it’s easy to see the path to them making a huge leap. For a 100-1 bet, this is about as much upside as you’re ever going to find.

Here’s a look at the full odds (which will likely have a bit of movement in the coming weeks, but probably nothing substantial until free agency):