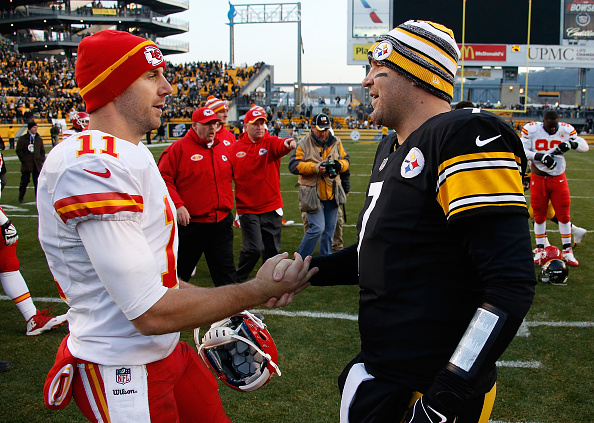 Week 6 of the 2017 NFL regular season is here, beginning with Thursday night’s Eagles-Panthers tilt, and you might be entering the weekend with your own preferences regarding which games to focus on, and which to place on the backburner.

1. Steelers at Chiefs (Sunday, 4 p.m. ET, CBS): Pittsburgh is looking to bounce back from last week’s catastrophe, while Kansas City is looking to move to 6-0. Two legit AFC contenders with plenty of juicy narratives.

2. Eagles at Panthers (Thursday night, CBS/NFL Network): This can’t possibly be a bad Thursday nighter, can it? A pair of 4-1 NFC contenders with red-hot quarterbacks. As long as the banged-up Eagles don’t fail to show up on short rest, this should be theatrical.

3. Lions at Saints (Sunday, 1 p.m. ET, FOX): Drew Brees, Matthew Stafford, bad defenses. Regardless of whether you think these teams are going anywhere, this’ll likely have plenty of fireworks.

4. Patriots at Jets (Sunday, 1 p.m. ET, CBS): This looked like a dud a few weeks ago but the Jets have nothing to lose, the Pats are fallible and these teams often play closer-than-expected games.

5. Rams at Jaguars (Sunday, 4 p.m. ET, FOX): The winner here will be 4-2. Neither team won five games last season. Rev up the bandwagons and enjoy the wildness when Los Angeles has the ball against that “Sacksonville” defense.

6. Chargers at Raiders (Sunday, 4 p.m. ET, CBS): The Chargers are almost always entertaining and there’s a lot on the line for the Raiders. This should be interesting regardless of whether Derek Carr suits up.

7. Colts at Titans (Monday night, ESPN): No Andrew Luck and maybe no Marcus Mariota but there’s still a lot on the line for two AFC South contenders. Should be close, and a nice chance to check out the new-look Titans.

8. Packers at Vikings (Sunday, 1 p.m. ET, FOX): This is one of those games that is only worth checking out if it’s close in the fourth quarter. I don’t get the feeling it will be.

No football for us today.

Take a look back at the first four weeks to see where we stand. #InBrotherhood pic.twitter.com/r8xv3rK03M

10. Giants at Broncos (Sunday night, NBC): This had so much promise a few weeks ago. Now it’s only worth checking out if you’re a Broncos fan or it has fantasy football implications.

11. Browns at Texans (Sunday, 1 p.m. ET, CBS): Cleveland is terrible and DeShone Kizer is out of the picture, but I’d tune in here just for some Deshaun Watson action.

#ICYMI Chris Thompson is a beast.

More highlights from the first quarter of the season: https://t.co/Rh178OHG1q pic.twitter.com/5xvMDfInIF

12. 49ers at Redskins (Sunday, 1 p.m. ET, FOX): There’s that whole Kirk Cousins-Kyle Shanahan connection storyline, but that’s not enough to save this game in a busy time slot.

13. Buccaneers at Cardinals (Sunday, 4 p.m. ET, FOX): There’s that whole Adrian Peterson thing, but that’s not enough to justify tuning in for more than a few minutes at a time.

14. Bears at Ravens (Sunday, 1 p.m. ET, FOX): Mitchell Trubisky has made his debut and it’s clear he won’t be pulling a Dak Prescott. Meanwhile, the Ravens should win easily but it’s also clear they aren’t contenders. This is a forgettable game.