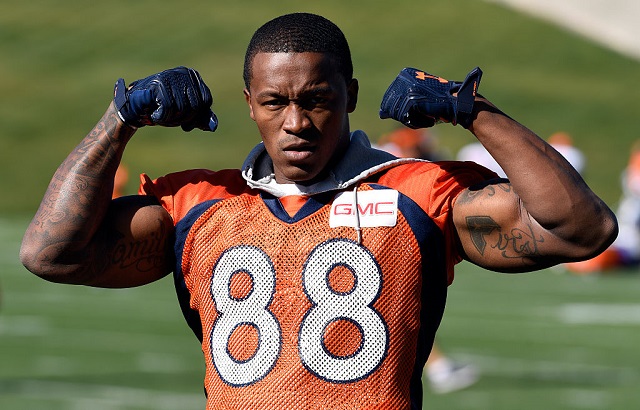 We’re nearing the midpoint of the 2016 season, and morale among NFL fandom couldn’t conceivably be lower and for good reason. Just about all the news surrounding pro football has been negative and the perception is that the quality of play is lower than ever.

This week, there was the conclusion of another domestic violence case where the league handed out meager punishment before the public became privy to disturbing evidence, forcing a team to take action in an obvious attempt to save face.

The prevailing narrative about this NFL season so far is that there is declining viewership, spurring every media figure who covers the NFL even passingly to speculate on the reasons why. That means every flaw of the sport being examined as a potential Achilles heel for the NFL: the CBA making the league younger and devoid of practice time, an oversaturation of the product, increasing concern for player health, an intermingling of sport and politics, and the league’s overbearing emphasis on eliminating celebration and fun.

It doesn’t help that NBA fans think their league is ascendant enough that it can start challenging a suddenly vulnerable NFL for dominance in the sports marketplace. It shouldn’t matter, but diehards care about these kinds of things, and they’re going to trash one league if they think it means their favorite will benefit somehow.

So being an NFL fan can be pretty damn depressing these days. Even if you happen to like what you’re watching, there’s a chorus of people on social media saying that it sucks. Obviously, if your issues with the league are sufficient that you can’t take watching anymore, then you should probably just stop watching. There’s little point tuning in from week to week just to complain about it constantly.

For those sticking around, what is there to look forward to? Are you doomed to grumble week after week about bad primetime games while listening to guesswork about low ratings? Surely, this thing we watch because it’s a thing to do with our free time can actually provide some measure of enjoyment. So let’s see how that might happen.

From an on-field quality standpoint, there’s few things the NFL needs like more capable quarterbacks. There’s never been a time when every team had what could be described as a good quarterback, but with Peyton Manning having retired and Aaron Rodgers and Cam Newton struggling, it seems like there’s a dearth of top-flight quarterbacks in the league. Thankfully, there are at least a few new faces that are performing well as rookies. Add to that the fact that veterans like Matt Ryan and Matt Stafford are having what might end up being career years, and there’s some hope yet that QB play is not toast.

The Patriots are closest thing to a team to beat in the NFL in 2016, and even they aren’t as good as they have been some years. It’s debatable whether there’s a challenger for the AFC title. Perhaps that team is the Steelers, if their luck with injuries is better down the stretch than it’s been the last few weeks. Otherwise, the conference is wide open. The defending champion Broncos still have a very strong defense, but their quarterback situation is murky at best.

At this point last season, there were five unbeaten teams and now, after the Vikings were beaten convincingly Sunday in Philadelphia, there are none. The NFC, in particular, looks to be there for the taking. The Seahawks have to be the safe pick, given their recent history of winning the conference, but they have significant problems on offense — notably whether Russell Wilson can stay healthy behind a shaky line. After them, you could make a case for six or seven other teams, and there’s no knowing which will get hot going into January.

Some argue that sports leagues need an overwhelming favorite to be truly compelling, and there might be something to that. Though having so many teams feel like they could reasonably contend can’t be bad for keeping fans interested. For as many who tune in for fantasy or whatever rooting interest they may have, there are still tons of fans whose interest is still directly tied to the success of their favorite team.

The Raiders are back, baby

Oakland’s last postseason game was their lopsided loss in Super Bowl XXXVII. It was fun to let them stew in that failure for a while, but enough time has gone by for people to miss the Raiders as a relevant team. Plus, they’re pretty fun, with an exciting offense led by a standout young quarterback and top receiver and a head coach willing to take some chances.

The vote for relocation to Vegas won’t take place until January, though with financing for the Las Vegas stadium in place and the state of disrepair of the Oakland Coliseum, it’s difficult to see the Raiders hanging around in Oakland. That means, since the team has vowed to keep playing in Oakland through 2018, there are only a few seasons left. Raiders fans and the Black Hole have been an iconic presence, and while a title run might be a little premature this year with the team’s suspect defense, a return to the postseason at least seems realistic and would be a welcome return for a once-proud franchise.

Hey, if we have to put up with mediocrity going unchallenged for years and years, we might as well have some fun with it. If the Rams succumb to “7-9 bullshit,” as Fisher termed it on Hard Knocks this summer, and finish with that record, Fisher will tie Dan Reeves’ all-time record of 165 losses, and in one fewer season to boot. If the Rams finish with 10 losses, he’ll break the record and I’ll toast his achievement with the finest bottle of wine 7-Eleven can provide. That he can do this while sitting the No. 1 pick for a whole season is a testament to the power of whatever dirt Fisher has on Stan Kroenke that is keeping him employed in perpetuity.

Hell, that may come this Sunday. And oh yes indeed, it will be nice. Hopefully Gronk has fun with it. If fans are willing to pony up money to buy out Brock Osweiler’s contract, they might be willing to cover Gronk’s fine.