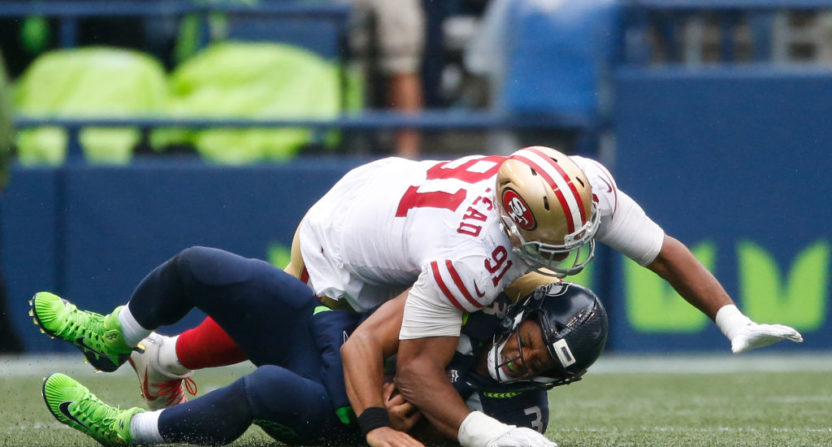 The Seattle Seahawks are extremely lucky not to be 0-2.

They’ve scored just 21 points in their first two games, and only two teams — the Colts and Texans — have averaged fewer yards per play (4.2). Their terrible offensive line continues to be terrible, veteran running back Eddie Lacy has failed to save the running game and the passing game continues to lack consistent weapons not named Doug Baldwin.

What’s wrong with that offense? It starts with the lack of pass protection coming from an offensive line that is short on cohesion and talent in general. Left tackle Rees Odhiambo — starting in place of the injured George Fant — has looked overwhelmed, guards Luke Joeckel and Mark Glowinski have already been responsible for three sacks and 16 pressures up the middle and 2016 first-round pick Germain Ifedi has yet to take the step forward they needed from him at right tackle.

.@Seahawks offense is like the horse that is still dead; I promise I will stop kicking it. This snapshot is eye opening #baldybreakdowns pic.twitter.com/q097ecaSli

The offensive line was a problem last year, in fact, when quarterback Russell Wilson couldn’t stay upright or healthy and put together what was easily the worst season of his career on paper. This year, the line is just as bad, his receiving options are no better, and while the running game benefited from a solid Week 2 performance from rookie seventh-round pick  Chris Carson, they still haven’t possessed the type of balance they once did when Marshawn Lynch was carrying the offense.

So none of this should be a surprise. The Seahawks also started slow last year, scoring just 15 points during a 1-1 opening fortnight. They did break through with some big performances after that, but it was a down year for a team that benefited from having a top-notch defense and found itself in the right division at the right time.

That’ll probably be the case again in 2017. San Francisco, Arizona and Los Angeles don’t look as though they’ll challenge Wilson and Co. regardless of what happens in Seattle. But it’s concerning that Wilson has completed just 56.1 percent of his passes and has averaged just 5.4 yards per attempt, ranking in the bottom five in the league in both categories.

It makes you wonder if the Seahawks are primed to once again win a bad division by default before coming up short as soon as they meet a high-quality opponent in January, just as they did last year and the year before that.