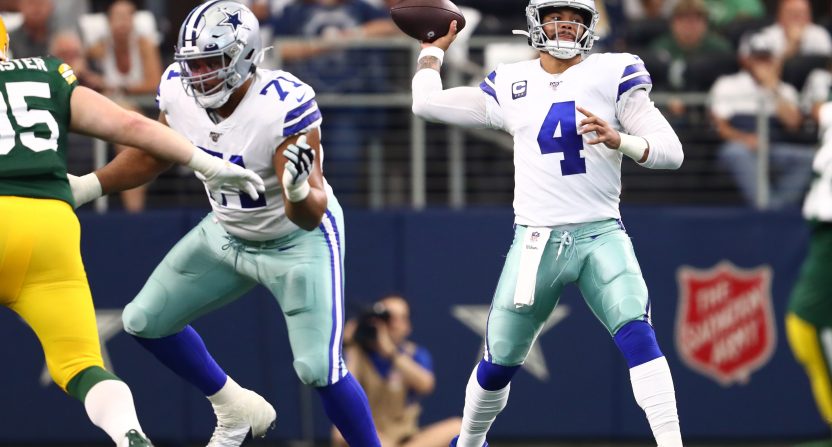 We saw two sides of Dak Prescott in the Cowboys’ 34-24 loss against Green Bay last week. On one hand, Prescott racked up 463 yards and two touchdowns, leading Dallas on a 21-point comeback. He and Amari Cooper lit up the Packers secondary, with Cooper gathering 11 receptions for 226 yards and a touchdown.

At the same time, Prescott threw three picks and saw his team down 31-3 at one point. The Cowboys were struggling to convert third downs past midfield, and the interceptions gave a humming Packers offense chances to blow up the score.

A week after a tough 12-10 home loss against New Orleans, the defeat against Green Bay created more talking points for Cowboys skeptics, or more specifically Dak doubters, who argue against a lucrative contract extension for the quarterback. Regardless of the naysayers, Prescott will be in line for a large deal, and his play this year validates that.

It’s almost certain that Dallas will at some point pay Prescott, who is in the final year of his rookie contract. The question, though, is how much they will be willing to give up, and whether they even have a choice in the matter. Prescott reportedly wants a contract in the $35 million a year range, a deal that would tie Prescott with Russell Wilson for the highest annual value in the league, per Spotrac.

For fans who justifiably don’t see Prescott at the level of Wilson, a massive contract can be hard to fathom. Dallas will cripple their cap space when they extend Prescott, and there’s an argument that Prescott will never be able to carry the Cowboys beyond the sum of their parts the way other QBs are able to.

Contracts, though, are heavily dependent on the market, and Dak Prescott-level signal-callers do not grow on trees. It’s no wonder that Joe Flacco extracted tens of millions of dollars out of the Ravens for mostly mediocre QB play over the years. Flacco could look at Baltimore and say “good luck finding anybody better.” (A red-hot 2012 playoff run and Super Bowl ring helped him, too.) Jared Goff, arguably worse than Prescott, makes $33.5 million per year after a recent extension.

Even if Prescott, the Cowboys’ apparent QB of the future, isn’t yet breaching the elite tier of NFL passers, he has plenty of leverage in negotiations. Extending him is almost a necessity: It’s unlikely that the Cowboys will be able to find someone better without giving up significant assets and sacrificing a window of contention.

Maybe Prescott will never reach the elite tier. Dallas will simply have to work a little harder building the roster around him. Given their team right now, they don’t have too far to go — they’re tied with Philly atop the NFC East with a 3-2 record right now, and they look like legitimate contenders.

Perhaps the Cowboys’ long-term future would look better with a QB at the level of, say, Deshaun Watson or Carson Wentz. Good quarterbacks are very difficult to find, though, and beggars can’t be choosers. When you find someone at Prescott’s level, you hold onto him. Letting a player like him walk after his rookie deal and trying to draft a new QB or find a replacement elsewhere is basically unprecedented.

It’s also important to consider that Prescott is actually pretty good, and profiles as an above-average NFL QB. He’s fourth in adjusted yards gained per throw, behind only Wilson, Watson, and Patrick Mahomes, and leads the league in QBR, per Pro Football Reference. By Next Gen Stats’ Completion Percentage Above Expectation, Prescott is third in the NFL, indicating that he is making and completing tough passes at a high rate.

Those statistics might have been boosted by easy games to start the season, but it’s not like he’s plummeted against tougher defenses in the last two weeks. Prescott puts an impressive touch on his passes, and has a way of hitting tight windows with precise timing. Watch back the highlights of the Green Bay game and you’ll see a handful of ridiculous throws.

The revamped Cowboys offense under new offensive coordinator Kellen Moore has helped Prescott take a step forward this year. The run game complements the pass game; per Football Outsiders, the Cowboys have both the third-ranked pass offense and third-ranked run offense.

Prescott will have to cut back on bad decision-making. One of his three picks against Green Bay wasn’t entirely his fault as it was a pass that hit his receiver in the hands, but he had two near-misses that he got away with — one late-game pick called back by an unrelated penalty, and another dropped by a Packers defensive back in the middle of the field. Prescott has the fifth-highest interception percentage in the NFL. He is generally a more risk-averse quarterback; last year, he had the fifth-lowest interception percentage in the league.

Cowboys fans should feel comfortable paying Prescott. He has shown signs of growth this year, and seems ready to lead Dallas to consistent contention. It’s a good bet that he’s going to get his money sooner rather than later.