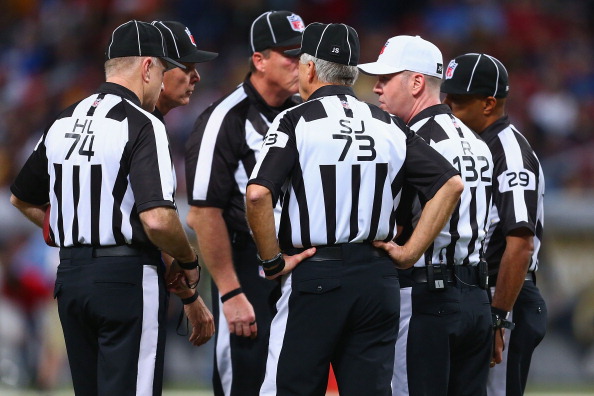 Nostalgia is powerful and change is scary. That dynamic makes it difficult for many of us to fully embrace technology, even if it would benefit us greatly. And naturally, it is generally easier for those who have spent much of their lives surrounded by modern technology to accept and grasp the potential changes that have been made possible by technological advancements. That explains why you’re likely more inclined to accept said changes than your grandfather.

The NFL, which is run primarily by old men still getting acclimated to flip phones and fax machines, is the grandfather of the American sports spectrum — often unwilling to even admit that change might be good. That might explain why footballs still don’t possess microchips which could easily tell us whether a ball broke the plain of the end zone, or why the vast majority of plays remain non-reviewable, even as ahead-of-the-curve franchises and executives push to broaden replay policies in order to allow coaches to challenge whatever the hell they want (or something resembling that).

The NFL has made concessions in this area over the years but “judgement calls” continue to be non-reviewable, as do many other calls for no clear reason. The league continues to be reactive rather than proactive in this respect, only making certain calls reviewable after hell has been raised or after a great injustice has taken place as a result of a botched call being set in stone.

The Baltimore Ravens had a great proposal at this week’s owners meetings, suggesting that instead of using a short list of reviewable calls, the league instead adopts a list of non-reviewable plays, leaving everything else open for a potential coaching challenge. With challenges still capped, that wouldn’t have slowed down games and would have given officials some much-needed help when dealing with a complex rulebook that probably needs to be rewritten anyway.

But that proposal was tabled, presumably to the chagrin of fellow forward-thinkers in Carolina, New England and Oakland (Ron Rivera, Bill Belichick and Jack Del Rio have all pushed publicly for open challenges).

In fact, the league hasn’t even gotten to a point at which it will follow the CFL’s lead by adding a live replay official who can monitor the game on television and communicate with on-field officials in order to fix glaring errors without stoppages. Why? According to NFL V.P. of officiating Dean Blandino, they don’t want to sacrifice the “human element.”

“It’s something we’ve discussed, a video official — the Canadian Football League is actually implementing that this year,” Blandino said this week, per Pro Football Talk. “And as the technology gets better, it becomes more feasible. So we just have to continue to monitor that. But we can’t lose that human element.”

I hear sentiment like this all the time, but there’s rarely anything concrete to back it up. The game of football has never been about the officials. It’s about 22 players at a time, battling for position on a 120-yard field. The less we see or hear of the officials, the better. It’s important that football not lose its human element, but I can’t see that happening unless we replace running backs with robots.

Humans are flawed, which makes football — and all sports — great. But that very same reality actually detracts from the game when it applies to officials. Because human officials are flawed, but technology generally is not. Isn’t it better to get it right as often as possible? Is any fan really willing to accept more mistakes — and the potential for their team to get screwed — in order to retain the “human element” to officiating?

I know, I know. Judgement calls can’t be reviewed! But what the hell is a judgement call anyway? Every call is technical to an extent. Either a catch was made or it wasn’t, either holding occurred or it didn’t, either it was an illegal bat or it wasn’t. Either the facemask was grabbed or it wasn’t. There are specific guidelines stipulating what is and isn’t pass interference. Same for every other rule in the NFL’s stupidly massive book.  Why not give officials a chance to pause and take a second look at a potentially bad call? Wouldn’t that actually help them avoid criticism?

We’ll always need officials for the intuitive basics of the game, so this isn’t about saving part-time jobs. This is about preserving and growing the integrity of a game that has become too fast and too complex for its officials. These guys should be embracing video review with open arms, because nothing saves a referee’s ass as much as a chance to take a step back and right a potential wrong.

The league is moving in that direction. Its aversion to technology has slightly subsided in recent years. Defensive players now have a radio connection to the sideline, more plays are admittedly added to the “reviewable” list each year and players can now use tablets for analysis between drives. But as long as league brass continues to believe, rather inexplicably, that the game is better off forcing 50-year-old men to decipher plays at breakneck speed with no safety net than it would be after implementing a system that involves comprehensive on-the-fly replay review as well as unlimited opportunities to challenge, NFL football will continue to miss out on a huge growth opportunity.