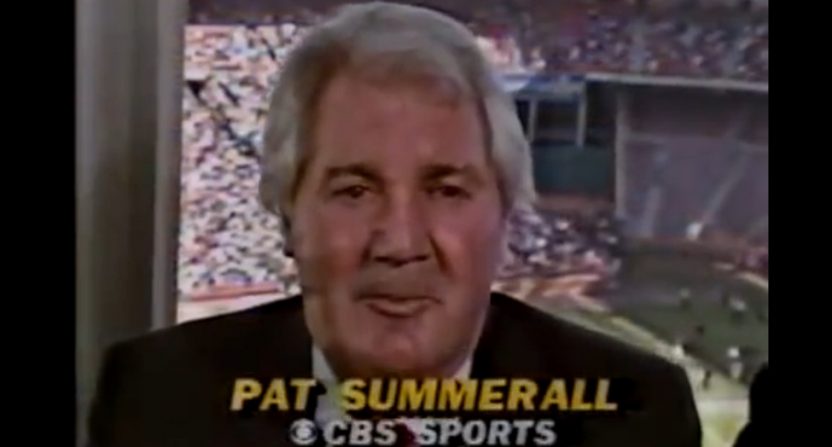 While Pat Summerall is mostly known for his decades of NFL broadcasting with CBS and Fox (he also called college football, golf, tennis, and basketball), he had an impressive playing career as well, playing collegiately at Arkansas and then spending 10 seasons in the NFL with the Detroit Lions, the Chicago Cardinals and the New York Giants. He played defensive end, tight end and kicker in college, and while he was mostly a kicker in the pros, he still took some hard hits and was diagnosed with football-related dementia and CTE in the last years of his life, and joined the class-action lawsuit against the NFL in 2012. Summerall passed away in 2013 at 82, but his wife Cheri has now filed a claim with the NFL; Chris Nowinski of the Concussion Legacy Foundation shared that news on Twitter Friday.

Breaking: NFL broadcasting legend Pat Summerall, a former #NFL placekicker & a tight end/defensive end for Arkansas, was diagnosed with #CTE after his 2013 death. The news is becoming public because his widow has filed a claim against the NFL. https://t.co/IIebzNIkgc

Here’s more from the linked story in the Fort Worth Star-Telegram, which mentions that Summerall’s estate is unlikely to receive significant financial compensation given his age when he was diagnosed, but that this is being done as “a show of support for the cause at large”:

“I filed the claim because it is what Pat wanted, and even though Pat was not in the same financial dire straits that many of his former colleagues are, he always felt all for one, one for all,” [attorney James] Acho said via email. “He felt a deep sense of esprit de corps with his fellow ex-players.”

“Pat died two years after the concussion lawsuit was filed and he totally supported it and this is what he wanted,” Acho said.

Cheri Summerall said her late husband “harbored no bitterness toward the NFL,” but he supported the lawsuit filed in 2012.

“Pat supported this lawsuit when it was filed and as it turns out became a plaintiff himself when he was diagnosed,” Cheri Summerall said. “Pat believed the men who built the game should be taken care of and that’s why we filed this. It was out of principle. It is also a show of support for the cause at large.”

It’s interesting to see that, and it certainly seems like this will provide significant support for the cause. There’s a lot of discussion around the NFL and its treatment of retired players, both with and outside of concussions (as with the recent letter and comments from Eric Dickerson and other Hall of Famers), and there’s still a ton of recognition of and admiration for Summerall throughout the football world. This move should definitely bring some more attention to where the concussion lawsuit and the payouts to players are at.

[The Fort Worth Star-Telegram]