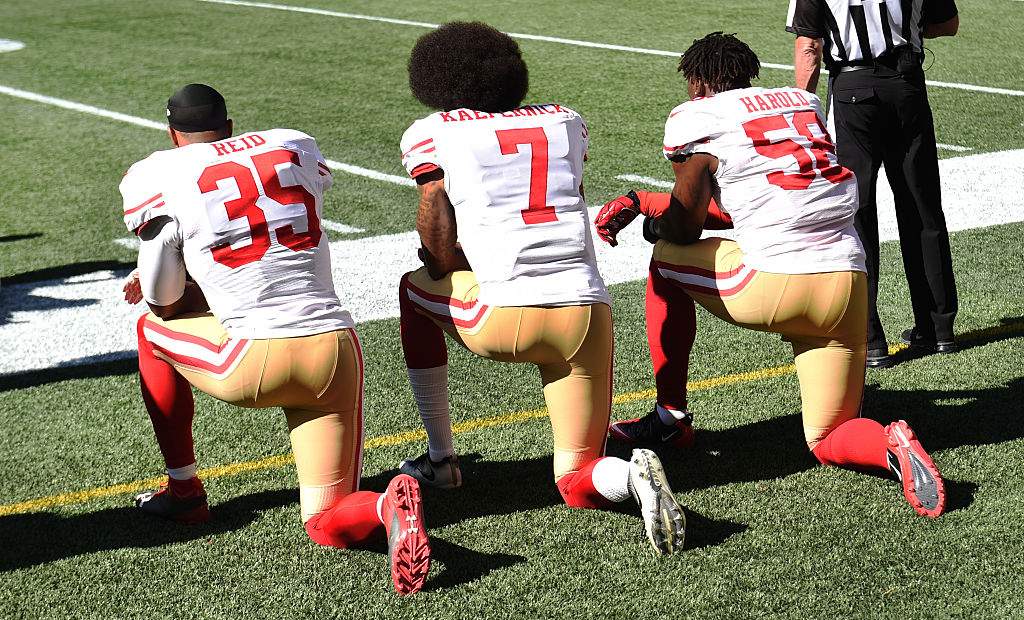 Did you hear Colin Kaepernick’s name mentioned this past Sunday? I didn’t. That could be a result of my decision to treat pregame shows like a solar eclipse. (Look straight at one and you’ll go blind.)

But still: the discussions that Kaepernick triggered, or rather, forced upon many of those who’d prefer to view America as this mythical post-racial utopia seem to be waning.

This was predictable, too. This is how these things usually go. Over time, we become numb to repeated images, no matter how shocking. The first photos out of Ferguson shook us all. Those coming out of Charlotte last week were chopped up and tossed into the meat grinder of political campaign discourse. By now, the sides have been staked out. You either see why black people might be upset with some of the things going on in America or you’re Mike Ditka.

“You need a white guy to join the fight. The white guy is super important to the fight,” Seahawks defensive end Michael Bennett said last week to the Seattle Times‘ Matt Calkins. “For people to really see social injustices, there must be someone from the other side of the race who recognizes the problem, because a lot of times if just one race says there’s a problem, nobody is realistic about it.”

“I think it would have a great impact,” Seahawks receiver Doug Baldwin added, also via the Seattle Times. “It would get a different part of the population to open their eyes and ears.”

Kaepernick got people talking. Unfortunately, most of that talking has involved four-letter words. 69 percent of white Americans don’t approve of Kaepernick protesting the National Anthem. 44 percent of football fans claim they’ll stop watching the NFL if more players join the fray. (I’m calling BS on that.) The Republican candidate said Kaepernick should move to a different country if he doesn’t like this one. This after winning the Republican primary by running on a platform of Make America Great Again, the implication being that right now it’s not.

So, yes, it’s OK for Donald Trump to criticize the country, but not the 49ers’ backup QB.

That’s the uphill battle that Kaepernick, Bennett, Baldwin and the rest are fighting, not just that black voices like theirs aren’t being heard, but that so many believe they don’t have the right to use them. And so, on the surface, it’s a bit surprising that not a single white player in the NFL has decided to join them. (Megan Rapinoe, a white woman of Major League Soccer’s Seattle Rain, joined the protests, but the actions of MLS athletes aren’t typically covered on national cable news networks).

The NFL is a big league full of individuals from different backgrounds. Certainly, there’s at least one white NFL player who sympathizes with what Kaepernick is trying to accomplish, who believes that it’s time to have an honest conversation about where America is.

Then again, it’s not just white fans pushing back against these protests. Prior to the regular season, Bleacher Report’s Mike Freeman asked numerous NFL executives and coaches how they felt about Kaepernick’s stance. One labeled him a “traitor.” Another said, “He has no respect for our country,” and as if that take wasn’t sizzling enough, dropped a “Fuck that guy” cherry on top.

These are the men in charge of doling out NFL jobs. Should we be shocked that those not receiving pressure from their friends and family back home aren’t stepping out onto the ledge?

Soon, however, someone is going to be the first. It might be one of Kaepernick’s white teammates. Maybe it will be a socially conscious coach who feels like it’s his duty to stand with his mostly black team. Or perhaps it will come in a few weeks, when the NBA season tips off. Detroit Pistons head coach and president — meaning “boss” — Stan Van Gundy has already expressed public support for players voicing their thoughts.

“I’m encouraged by the fact of what some of those guys stood up and did at the ESPYs and had a conversation,” Van Gundy said last week to the Detroit Free Press‘ Vince Ellis. “I’m really proud of the fact that we have guys that not only see the problem, but want to try to do something about it. I think that’s exciting and we want to try to help direct them.”

Eventually, a white athlete unafraid of consequences. or a coach (though we know it won’t be Clemson football coach Dabo Swinney), is going to get down on one knee during the National Anthem. He, too, will likely be labeled a traitor and have expletives tossed at him. Some teammates or executives might even shun him.

Somewhere, though, a person will see that same message, only this time being delivered by one of their own. At that moment, maybe he or she will pause and think for just an extra second, about themselves and what Colin Kaepernick is almost begging for them to hear.