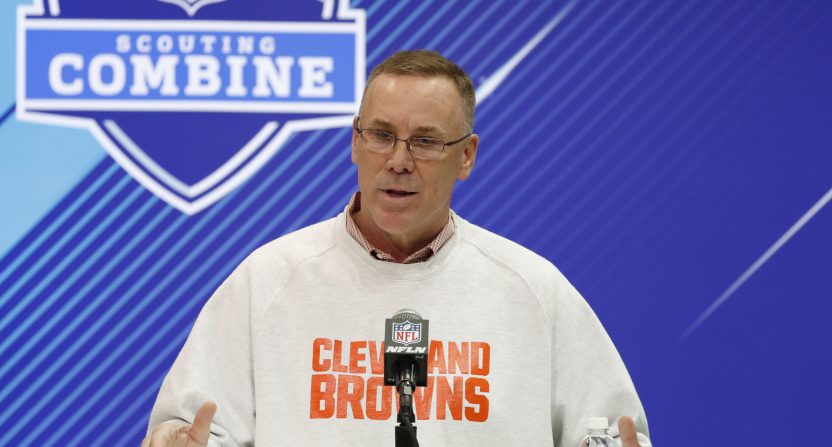 But because the league allows teams to touch base with players whose contracts are expiring in the two days leading up to the start of the new league year, most of the high-profile deals had already been consummated before free agency technically got underway.

Hundreds of players remain available, but with the work week coming to an end, so to has the first big free-agent signing wave of 2019.

With that in mind here’s a rundown of winners and losers from the heart of the process.

Winner: Cleveland Browns. Not only did they bolster the offense greatly with Odell Beckham Jr. and Kareem Hunt, but they also added some much-needed experience on defense with the additions of Olivier Vernon and Sheldon Richardson. Cleveland looks jacked.

Loser: New York Giants. They traded away one of the league’s best young receivers and essentially admitted they were rebuilding with that and decisions to part ways with veteran defensive stars Olivier Vernon and Landon Collins. Yet they’re still giving dinosaur Eli Manning more than $23 million, and they inexplicably signed veteran Golden Tate (older and worse than Beckham) to a high-priced deal. General manager Dave Gettleman is clueless.

Winner: Green Bay Packers. After “splurging” on tired old vets in their first significant foray into free agency in years in 2018, the Packers got smart and more aggressive this time. They became serious about revamping their defense to give Aaron Rodgers more support. It’s hard not to get excited about big new edge-rushers Za’Darius Smith and Preston Smith, as well as cover-savvy safety Adrian Amos, all of whom will be just 26 years old in 2019.

Loser: New York Jets. They committed a combined total of more than $30 million a year to C.J. Mosley (a good-not-great linebacker who doesn’t rush the quarterback) and Le’Veon Bell (a rundown back with a bad attitude). Those moves would have looked excellent in 1975.

Winner: Jacksonville Jaguars. I don’t know if Nick Foles can do it again, especially outside of Philadelphia, but Jacksonville badly needed something new at the most important position in the game and it had practically no competition for a Super Bowl MVP quarterback. Foles is undoubtedly an upgrade, and $22 million per year ain’t bad at all for a starting signal-caller in 2019.

Loser: Baltimore Ravens. Not sure what Earl Thomas has left, but even if Thomas finds a second wind and that signing works out, Mark Ingram is probably on his last legs and they’re going to miss Mosley, Smith, Eric Weddle, Terrell Suggs, John Brown, and Michael Crabtree.

Winner: Trent Brown. A mediocre offensive tackle for the first three years of his career, Brown lucked out so much it’s hard to believe. He traded to the best organization in sports in exchange for peanuts, he landed a starting job because of an injury and then he was able to coast all year in front of a quarterback who delivers passes at the speed of light. There’s a good chance he’ll come back to earth in Oakland, but the Raiders made him the highest-paid offensive lineman in NFL history anyway.

Loser: Le’Veon Bell. His gamble quite simply backfired. The market wasn’t strong for Bell this offseason, and his agent just couldn’t get a real bidding war going. That shouldn’t be surprising considering the dude’s past workload at a short-shelf-life position, but his so-so deal with the Jets is a reminder that you never leave money on the table in this league.

Winner: Trey Flowers. Tremendous player, but Flowers certainly benefited from supply and demand at that position. With so many pass-rushers stolen from the market by the franchise tag prior to free agency, a player who’s never been to a Pro Bowl and has never had a double-digit-sack season landed the fifth-most-lucrative deal for a defensive player in NFL history.

Loser: Ziggy Ansah. There were already questions about Ansah’s injury history as well as the validity of his age, but it’s still shocking to see such a cool market for an apparently 29-year-old pass-rusher who was a first-round pick and has a Pro Bowl as well as two double-digit-sack campaigns on his résumé. He’ll sign somewhere soon, but it won’t be for big money.