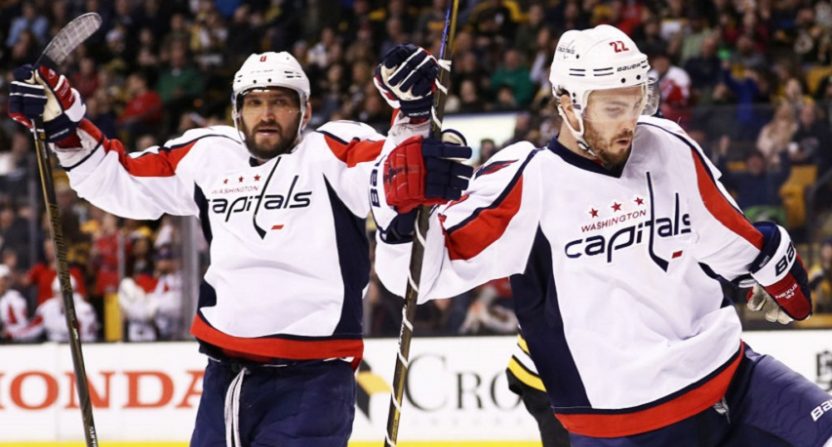 Introductory sections to NHL playoff preview pieces are always a waste of time. You know the deal. Sixteen teams, four rounds, two months, one champion, 245 non-calls on obvious penalties that are ignored because rules that apply throughout the regular season don’t apply to a bevy of situations during the postseason. This is just killing time until we get to the predictions.

Here’s the penultimate paragraph of the opening segment, in which you learn the puck drops on the Stanley Cup Playoffs Wednesday night with games in the United States being broadcast on MSNBC and CNBC, although Rachel Maddow will not be calling the games. That seems unfair. Going into the situation blind, there’s no way she can know less about hockey than Jeremy Roenick.

Then there is this, the final paragraph before the series-by-series breakdown, in which it’s explained what you’ll find below. Statistics. Important factors. Picks that have at best a 50-50 chance at being right. Jokes that have a 50-50 chances of being funny. All that’s left is a final sentence that leads into the capsules that ends with a colon:

Key injuries: Canadiens defenseman Alexei Emelin will miss Game 1, but not having the slow-footed blueliner could be a blessing against the quick Rangers, who are about as healthy as you can be at this time of year (that’s code for having a bunch of guys who are banged up but available).

Who will win: Canadiens in six. It’s a very close matchup, but the Rangers’ deficiencies on the blue line have reached the point that not even Henrik Lundqvist can cover for it anymore.

Key injuries: Erik Karlsson isn’t 100 percent but he’s expected to play Game 1. Defenseman Torey Krug and Brandon Carlo aren’t expected to play in Game 1 and, you won’t believe this, but the Bruins aren’t revealing their status for the series.

Reasons to root against them: Ottawa is currently the capital of Boring Hockey thanks to coach Guy Boucher’s ultra-defensive system. This is a copycat league, so let’s hope the Senators don’t give anyone a reason to be copycats. … Firing Claude Julien, one of the best coaches in the league, in the middle of the season is another thing that should not be encouraged with playoff success.

Who will win: Senators in seven. Everything about this matchup tells me the Bruins are the better team. The Senators are probably more banged up and played worse down the stretch. But it’s just a feeling that Craig Anderson is going to flourish in Boucher’s suffocating system and find a way to win one more game than Tuukka Rask.

Key injuries: Leafs coach Mike Babcock hasn’t expressed concern about Frederik Andersen, who had his head crushed in the team’s penultimate game against the Penguins (by Tom Sestito, shocker), but that’s not exactly something you divulge before a playoff series. … The Capitals, who seriously can’t possibly blow it this year, have all of their big guns at the ready.

Reasons to root against them: Is it possible to root against either of these teams? Either you hate fun, young teams on the rise (the Leafs) or you take pleasure in seeing a great regular-season team (the Capitals) constantly crap itself in the postseason. It’s possible you can hate both if you’re a Canadian not living in Toronto, as you despise the Leafs and never want to see a Russian like Alex Ovechkin have success.

Who will win: Capitals in five. The Leafs will find a way to take one game but if it goes any longer, you can start to worry about the Capitals.

Key injuries: Kris Letang is out for the playoffs, and no playoff team has a bigger loss. Carl Hagelin has been out for a while and his availability could be limited. … Zach Werenski has had an upper-body injury but he should be in the Blue Jackets’ lineup for Game 1.

Reasons to root against them: Because they won it last year? No one likes a dynasty? Perhaps the real reason is because no team that believes you should button shirts from the bottom deserves to have more success. … John Tortorella ruined Team USA at the World Cup. He doesn’t not deserve a playoff series win six months later.

Who will win: Penguins in seven. With Letang, this wouldn’t be a series. But the Blue Jackets have just enough working for them in their favor at the outset of this series, including Sergei Bobrovsky, to win it. It should go down to the final game, but the Penguins are healthy enough to slip by.

Key injuries: Artem Anisimov has been out since mid-March with a lower-body injury but he’s expected to be back for the playoffs, because why should anything ever go wrong for the Blackhawks? … The Predators have a couple players nicked up but nothing anything major.

Who will win: Predators in six. I picked against the Blackhawks on a podcast Monday, then did some research to write this, and now I don’t feel as good about that. But what the heck? Here’s your big first-round upset!

Key injuries: Jared Spurgeon of the Wild is considered day-to-day with a lower-body injury. … The Blues are mostly healthy with no major players seriously hurt.

Reasons to root against them: Isn’t Minnesota calling itself “the state of hockey” a little annoying? You don’t want that for two rounds. And the Blues? They are a slightly less boring version of the Senators. Maybe these two teams can play an infinite Game 7 so they don’t get to the second round.

Who will win: Wild in five. The Blues got hot after trading Kevin Shattenkirk and firing Ken Hitchock, but I think that’s an aberration. The Wild are deeper and better in all areas, so this one goes quick.

Key injuries: Cam Fowler is the West’s version of the Letang injury, and the Ducks will miss him, although they have a very deep blue line. … The Flames are perfectly fine.

Reasons to root against them: If you don’t want to reward bad moves, the Ducks not having success with Randy Carlyle instead of Bruce Boudreau should motivate you. Flames ownership wants to squeeze taxpayers for more money, and you know they’d use a deep playoff run as ammunition to get it done.

Who will win: Flames in seven. Because it would be funny if the Ducks got up 3-2 and lost the series in seven, which is the reason Boudreau was fired last offseason.

Key injuries: The Oilers are as healthy as can be. … The Sharks are, well, the opposite of that. Logan Couture and Joe Thornton may not be available. They both practiced Monday so there’s a chance they play, but they are nowhere near 100 percent. How much they can contribute could decide the series.

Reasons to root against them: The only reason the Oilers are good is because they won four draft lotteries in six years, so they are basically that person who was born into money, screwed around with it, and accidentally found a way to add to it despite buffoonery. They are the Donald Trump of the NHL. As for the Sharks, maybe you hate teal. I don’t know.

Who will win: Sharks in six. Everything about this series says the Oilers will win. They are healthier and while they lack depth, the Sharks’ injuries balance that. But something tells me the Sharks will find a way.

And since this is where we do complete predictions…