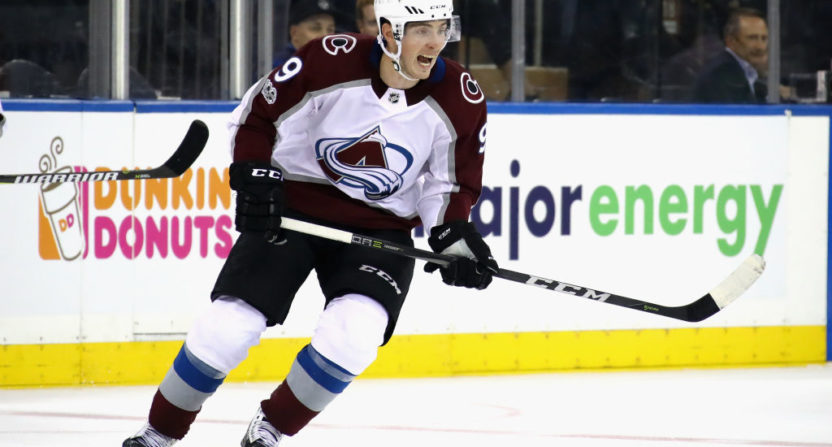 After massive speculation following a trade demand, the Colorado Avalanche have dealt star forward Matt Duchene to the Ottawa Senators in a huge three-team blockbuster.

Elliotte Friedman of Sportsnet.ca reports Duchene was dealt to the Sens, while Ottawa center Kyle Turris went to the Nashville Predators (where he’s signed a six-year, $36 million extension), and a bounty of players and picks went to Colorado.

The trade even happened in the middle of Colorado’s game against the New York Islanders (a 6-4 loss in the end), leading to Duchene leaving the ice mid-game:

This is nuts. As Blake Comeau helped off the ice, Matt Duchene sneaks off behind him as he's been traded mid-game pic.twitter.com/cimyiRl2Vz

Duchene didn’t want to be in Colorado. With that info public, Sakic had little to work with beyond Duchene’s ability. Turning Duchene into a first-round pick, a second-round pick and a third-round pick (equal compensation for a top player in restricted free agency) would have been fine itself. Getting Samuel Girard (an extremely talented NHL ready 19-year-old defenseman who should improve Colorado’s porous defense instantly), Shane Bowers (a first-round pick in last year’s draft), Vladislav Kamenev ( a decent left wing prospect) AND Andrew Hammond (who seems to have the skill to be at least a backup goalie in the league) is fantastic.

Sakic added to his prospect pool, stocked draft picks, added a much-needed up-and-coming defenseman and got solid prospects for Duchene. Not bad at all in what was always going to be a tough deal. It’s a huge weight off the GM’s shoulders.

However, the reason Colorado got so much for Duchene is that he’s one hell of a player.

The 26-year-old center has 10 points in 13 games in 2017-18 after a terrible 2016-17 where he produced just 41 points. Duchene is an immediate upgrade over Turris (at least offensively) and slots in perfectly on the Sens’ top line. With Turris facing unrestricted free agency, swapping him and no other impact players on the roster also makes the win-now Senators better. Sure, giving up a Turris, 1st, 3rd, Bowers, and Hammond might seem like a lot, but you can’t add talent like Duchene without giving up some, so this isn’t a bad move for Ottawa GM Pierre Dorion. Plus, not giving up top prospects Thomas Chabot, Logan Brown or Colin White makes the deal that much better as the future wasn’t gravely impacted. Duchene has two years left on his contract at $6 million per.

Nashville’s side of things is a little harder to sell, but there’s some merit to it if you look deeply enough.

Girard’s got a legit shot at being a top-pairing defenseman in the future, but the Predators – with Roman Josi, Mattias Ekholm, and P.K. Subban – are stocked at the position, so they don’t lose much depth.

Turris gives the Predators much-needed depth at second line center behind Ryan Johansen. Turris has put up three goals, six assists, and nine points in 11 games with Ottawa this season. Preds’ GM David Poile must really like him, as he’s already given him that six-year deal.

For a player that’s only hit 60+ points once in his career, it’s a big contract. But, the Predators will gladly welcome his well-rounded game onto their improving roster. Nashville doesn’t lose anything but depth on their NHL roster and – like the Sens – get better with Turris.

Kudos to Poile for once again swinging big during an ongoing season. It’s how he got Johansen and Seth Jones. We’ll see if this move works out as well.

It’s rare when such a mega deal happens and there are no obvious losers, but with this blockbuster, that appears to be the case. Ottawa and Nashville both added high-end talent, while the Avalanche got a bounty of picks and prospects. That looks like a win-win-win.