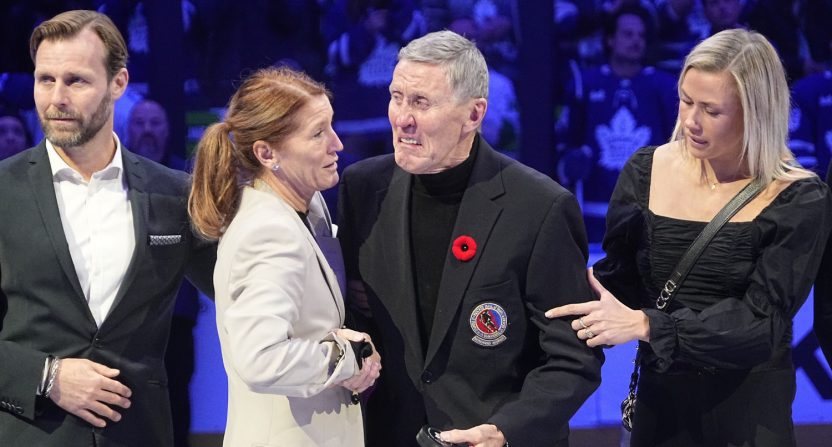 Toronto Maple Leafs’ legend and Hockey Hall of Famer Börje Salming has passed away at 71. The Leafs announced that news Thursday:

Salming then finished his NHL career with the Detroit Red Wings in 1989-90, then played three more years in Sweden. He was elected to the Hockey Hall of Fame in 1996 for his play with Toronto and the Swedish national team, the latter of which saw him one of six players elected to the International Ice Hockey Federation Centennial team. That team, announced in 2008, featured Salming alongside Canada’s Wayne Gretzky at center and four Soviet Union players:  Vladislav Tretiak in goal, Viacheslav Fetisov on defense, and Valeri Kharlamov and Sergei Makarov on the wings.

The passing of Salming comes after his battle with amyotrophic lateral sclerosis, or ALS. He announced that he was battling that disease in August. The Leafs honored Salming ahead of a Nov. 12 game against the Vancouver Canucks; he’s seen at center above with his wife Pia during that pre-game ceremony.

An emotional ovation for Borje Salming ahead of tonight’s game. 💙 pic.twitter.com/Jn8MTutj3V

Beyond his status as a Hall of Famer, Salming made an impact on many throughout the hockey world in numerous ways, including with his play for club and country. And many tributes poured in for him after Thursday’s news. Here are some of those:

So sorry to hear this, he was great player and a wonderful man. Years ago at the World Championship, someone joked with Salming that he single-handedly proved that Swedish players weren’t soft.

“Well,” he said, breaking into that trademark grin, “we were vikings.” https://t.co/93DOijN6Vh

What will Borje Salming's lasting legacy be?

TSN Hockey Insider @DarrenDreger shares what he thinks Borje Salming's lasting legacy will be, and recalls a memory he had with the @MapleLeafs legend that showed him how truly iconic Salming was not just in Sweden, but world wide. pic.twitter.com/ia9GCoi23P

He was the bridge between the old and new for most NHL fans, certainly in Canada. A "free player" from Europe meant less than zero when he arrived, and everything when he retired. Borje Salming blazed a trail and is a key name in hockey history. https://t.co/aqxwe9mUMe

Just so incredibly sad to see that Borje Salming has passed away. How wonderful that he got to feel the love from his fans one last time in Toronto just 2 weeks ago. RIP Borje 🙏 https://t.co/2Tdaw89xRV

This was just two weeks ago. Borje Salming showed such strength. Heartbreaking but glad he got a proper goodbye from the fans. RIP 🕊 pic.twitter.com/VZ3Y5TQBpV

The news of Salming's passing came when the round of SHL games had just begun. So prior to the start of the second period of the game b/w Börje's former team Brynäs at Leksand there was a short memorial ceremony and a minute of silence. pic.twitter.com/oPs0ZxAx3G

Felt pretty special to be at an SHL game when the news of Börje Salming's passing came. The minute of silence, the applause & the "BÖRJE! SALMING!" chants after. Nothing but love & respect for the legend here.

As a kid I literally bumped into Borje Salming coming out of a convenience store once. I’ll never forget because a) it’s not every day you come face-to-face with one of your favorite athletes, & b) he was the coolest, fittest, most invincible-seeming human I’d ever encountered 1/

The exception being that face and all the scarred up angles where he wore proof of nearly 1,200 NHL games. Any Hollywood tough guy could only wish to be able to pull off that look. We just nodded and he passed into the night as cool as the mist, & I tried to lift my jaw up /3 …

In 1986, we were busking outside the Bamboo when Borje Salming walked out. We stopped him, played ‘BOWendelC’ for him. He stood, listened and when we were done he took out a roll of bills from pocket. Looking at our empty case, then at us, he asked: ‘How much do u need?’ RIP King

Salming will certainly be missed, and he adds to the long list of those in the sports world who have passed away after battles with ALS. His impact on hockey will long be remembered.