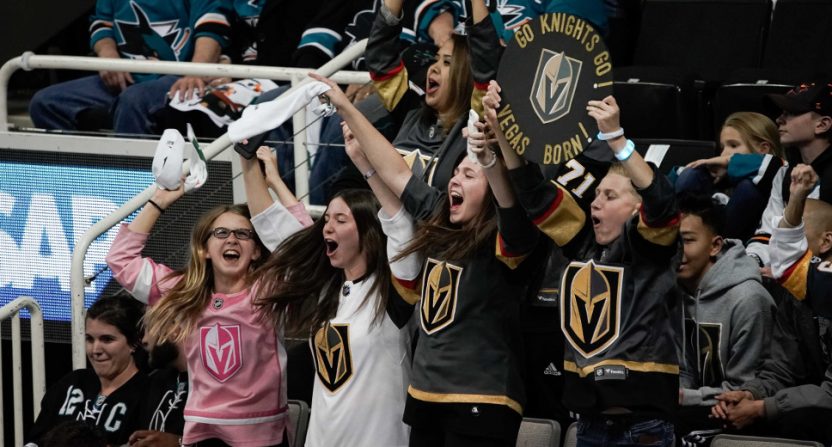 The Vegas Golden Knights have made plenty of history so far this season, making the playoffs in their inaugural year, getting their first playoff win in their first game, becoming the first NHL, MLB or NBA expansion team to sweep a series in their first year, and now, advancing to the Western Conference finals thanks to a 3-0 win in a road Game Six against the San Jose Sharks Sunday night. (With the game-winning goal coming from Jonathan Marchessault’s shot off Martin Jones’ jockstrap.) And that puts them in incredibly rarefied air for an expansion team:

But there’s some important context there. That 1917-18 Toronto Arenas team, a predecessor to today’s Maple Leafs, was really only an expansion team in name. They were part of a NHL formed to get away from the old NHA and from the former Toronto Blueshirts and owner Eddie Livingston, and they wound up with most of the Blueshirts’ players. So while they won the Stanley Cup that year by beating the PCHA’s Vancouver Millionaires, they didn’t face as many hurdles as the Golden Knights did. (Especially considering that the NHL was only four teams deep at that time.) And while the 1967-68 St. Louis Blues made the Stanley Cup Final, they did so thanks to playing in a division composed solely of expansion teams; they were swept in four games by the Original Six Montreal Canadians in that final. The only other NHL expansion team to reach the Stanley Cup Final any time early on is the Florida Panthers, who did that in their third season (1995-96). So the Golden Knights look like the most impressive expansion NHL team to date, even if they don’t get past the conference final.

And that holds true for expansion teams in the other three largest North American professional sports leagues as well. The previous high-water marks for success there come from the Milwaukee Bucks (won the NBA Finals in their third season in 1970-71), the Arizona Diamondbacks (won the World Series in their fourth season in 2001), and the Tampa Bay Buccaneers (won the Super Bowl in their 27th season, 2002-03). Of course, some other sports have seen greater success for expansion teams, such as the CFL’s Ottawa Redblacks winning the Grey Cup in their second year of existence in 2016 and MLS’ Chicago Fire winning the MLS Cup in their first season in 1998, but these biggest sports are perhaps the most notable thanks to the larger size of those leagues at the time the expansion team was added. And by and large, it usually takes at least a couple of years for an expansion team in those leagues to do anything significant. The Golden Knights have been well ahead of that trend all season, though, and they continued that with this series win.