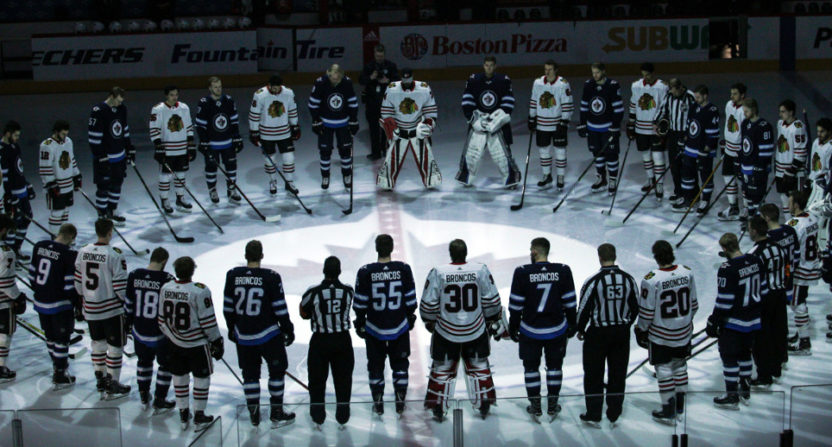 Friday night saw horrible news for the sports world, with the team bus for the Humboldt Broncos of the junior-A Saskatchewan Junior Hockey League involved in a crash with a semi that left 15 dead (as of Saturday night) and 14 more injured. But it’s been particularly amazing to see the way the hockey world has rallied around this team in the wake of this tragedy, with incredible outpourings of grief and support from so many corners.

In particular, a GoFundMe effort to raise money for the families of those affected has shot past $2 million in less than 24 hours, with donations from the likes of BAUER Hockey, the Calgary Flames (NHL) and Hitmen (WHL), the Toronto Maple Leafs (and their alumni association in a separate donation), Rogers Sportsnet, the Chicago Blackhawks Alumni Association and more. And the Winnipeg Jets (the closest NHL team to Saskatchewan) and the Chicago Blackhawks (playing the Jets Saturday night) came up with a particularly neat tribute for their game, wearing “Broncos” on the back of every jersey:

But that’s only part of how this has touched the greater hockey community. There are so, so many people who know those involved, or have been through similar experiences. And this is incredibly hard for the families of those impacted. Postmedia’s Eric Francis has a remarkable story on former NHLer Chris Joseph (13 seasons in the league with the Penguins, Oilers, Lightning, Flyers, Canucks, Coyotes and Thrashers), who was playing in the WHL at the time of the 1986 Swift Current Broncos bus crash (another Saskatchewan bus crash that killed four players), and who lost his son Jaxon in this crash:

Alerted to the collision with a semi-trailer around dinner-time, Joseph and his wife, Andrea, jumped in their vehicle in Edmonton and headed east towards the crash outside Tisdale, Sask., without any details of their son’s condition.

They prayed their phones would ring with good news during the seven-hour drive.

…“The last conversation (Chris) had with someone was that Jaxon was in hospital in Saskatoon, so we went to bed thinking everything was OK,” said Mike Joseph, Chris’ Calgary-based brother.

“To wake up and hear he didn’t make it … was devastating.”

…“It’s every parent’s nightmare – my brother’s and his wife’s whole world revolved around their kids,” said Mike. “It’s just so hard to fathom as his son was the star of the team and was having the best season ever as a 20-year-old and was loving it and was so happy. Now he’s gone, and we’re just waiting for any updates from family and what to do next.”

Beyond that, though, this has touched so many who weren’t directly involved. That included tributes on both CBC’s and NBC’s hockey coverage Saturday, including this CBC Coach’s Corner segment from Don Cherry and Ron MacLean:

And the Philadelphia Flyers held a moment of silence ahead of their nationally-televised game against the New York Rangers:

The @NHLFlyers held a moment of silence to honor the victims of the Humboldt Broncos tragedy. pic.twitter.com/z5cH6RMAnN

Elsewhere in the NHL, the Calgary Flames and Las Vegas Golden Knights wore Broncos’ logos on their helmets Saturday, and joined together for a pre-game tribute:

Amazing to see all the support pouring out from NHL clubs for the Humboldt Broncos.

The Jets & Blackhawks are wearing “Broncos” in place of name plates, while Flames & Golden Knights are wearing Humboldt Broncos logos on their helmets.#prayforhumboldt pic.twitter.com/B3DUAaHsQc

Flames and Golden Knights players come together at center ice in honor of the Humboldt Broncos. pic.twitter.com/P4wg1invBF

This has even reached international levels, with both Canadian prime minister Justin Trudeau and U.S. president Donald Trump expressing their support for the families involved:

I cannot imagine what these parents are going through, and my heart goes out to everyone affected by this terrible tragedy, in the Humboldt community and beyond. https://t.co/2cIn2CTy08

To the entire Humboldt Broncos hockey community: We are here for you. As neighbours, as friends, and as Canadians, we grieve alongside you. Statement: https://t.co/jKloGgn5io

Just spoke to @JustinTrudeau to pay my highest respect and condolences to the families of the terrible Humboldt Team tragedy. May God be with them all!

That Rangers-Flyers game was proof of how close many in the hockey world are to something like this, as NBC’s Pierre McGuire mentioned during their coverage that Rangers’ assistant coach Lindy Ruff lost his brother Brent in the 1986 crash, and Flyers’ head coach Dave Hakstol grew up with the Ruff brothers. But beyond that, so many in Canadian hockey in particular are so familiar with long bus rides like this, as Bruce Arthur explored in a Toronto Star piece:

“We’d hit the rumble strips or something and it was funny, guys would laugh,” said Connor McDavid in Edmonton. “You never think that anything bad was going to happen; you thought it was a haven, a safe space.”

“That’s exactly why it hits home because everyone has been on that bus before.”

…“I prepared to talk to you so I won’t get emotional,” said Leafs coach Mike Babcock, a Saskatoon boy since he was a kid. He still had to keep himself from crying.

“Yeah, I know that road pretty good,” Babcock said. “It didn’t seem like a big spot, it’s not mountains or anything like that, but accidents do happen. You send your kid away — in my case to junior hockey — or college hockey, or college soccer, and I always used to think about those vans that the coaches were driving in college soccer: I always thought those were a nightmare. This was supposed to be as safe as it gets, and it just goes to show you you’ve got to embrace each and every day, and every day that you’re with your …” — he had to stop for a second, and took a breath — “your family, you better enjoy it.”

…“Even for me, my best memories are riding the bus, and doing what junior hockey players do: talking, playing cards, watching movies,” said Toronto Maple Leafs defenceman Morgan Rielly, who played hockey in Saskatchewan from Grade 9 through major junior. “When you talk to guys in this room, or on different teams that you might meet along the way, that’s the first thing you talk about. ‘Oh, what was your longest bus ride?’ ”

That’s a big part of why this has struck such a cord for so many. Everyone knows the long bus rides, but few ever think that they could end this way. The 1986 crash is still a huge moment in hockey history, with the WHL player of the year award even named the “Four Broncos Memorial Trophy.” And like that one, this crash will echo through the years, and touch so many throughout the hockey world. It’s great to see how that world is chiming in with support here, but this is going to have a massive effect on everyone involved for years to come.