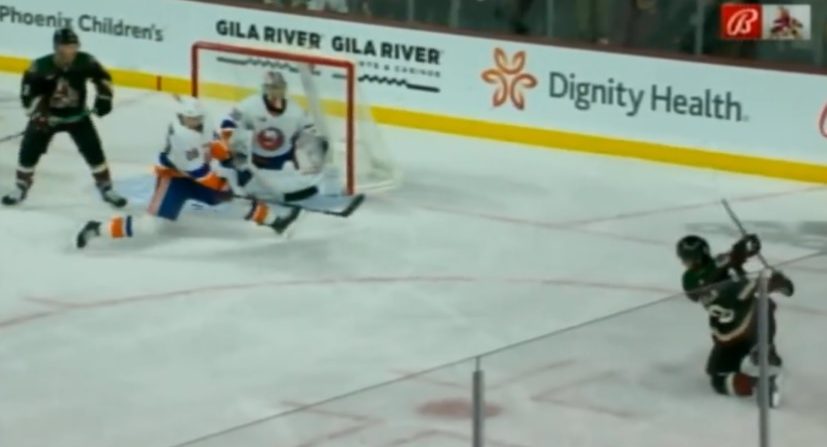 When a hockey play falls to the ice to stop a puck, he generally does so knowing that pain and a potential bruise are distinct possibilities. It’s a trade that players are usually willing to make to keep a puck from going into their nets. On Friday, though, New York Islanders defenseman Alexander Romanov experienced the worst of both worlds — the absolute worst.

The Arizona Coyotes led the Islanders 4-3 in the third period. So, when Arizona entered New York’s territory in the third period, the Islanders knew that they had to play sharp defensively, as any goal would likely seal the game. That goal came when Clayton Keller scored his second shot of the night. Only, the puck didn’t take the normal route from Keller’s stick to the back of the net.

Romanov dropped to the ice to block the shot from Keller. He did that. But in doing so, the puck deflected off of Romanov’s body and into the back of the net. Now, which part of Romanov’s body got hit? Well, let’s just say that we hope he was wearing a sturdy cup.

There are no good ways to allow a goal. This, though, is about the worst way possible. pic.twitter.com/i0V8IgXfIL

Stunningly, this is even worse than just taking a puck off of the groin and hitting it into your own net. The puck was not going on net. Arizona’s Travis Boyd might have had an outside chance at deflecting the puck into the net. But going at that speed, that seems unlikely.

This was all bad for Romanov. He put his body on the line to stop a potential goal, only to use his body to allow one — in the most painful way possible.

TWEET FROM THE FUTURE: Me in April after the #Isles miss the playoffs by a point and thinking back to the deflected Coyotes goal off Romanov's junk. pic.twitter.com/U3QeGk7XFp

A goal off Romanov's junk.

That's gotta hurt on a number of levels. https://t.co/8lg1T6jEiM

To top it all off, while the Islanders scored one late goal, they couldn’t get an equalizer. So, the goal off of Romanov’s groin was the game-winner.