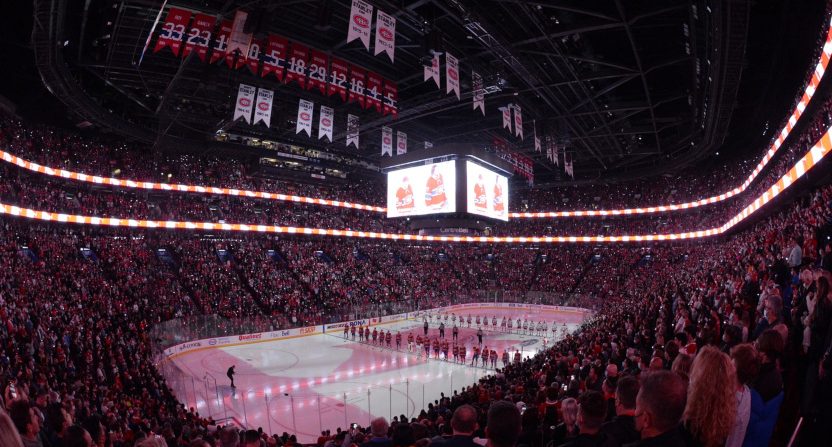 The rise in COVID-19 cases around the spread of the Omicron variant is having major effects in many sectors, including in sports. We’ve  seen numerous cancelled or postponed games, and now we’re seeing some games go on with limited to no fans, especially in Canada. There, the Toronto Maple Leafs and Toronto Raptors have both responded to new Ontario government rules to cut capacity at indoor arenas to 50 percent by refunding every non-season ticket seat and dividing the season ticket holders into two groups and alternating what games those groups can go to. That’s understandably provoked some backlash from those who had already made plans to go to games and now can’t. And that backlash may be even more notable in Montreal, where the Canadiens announced less than two hours ahead of a 7 p.m. home game against the Philadelphia Flyers that the game would be played in an empty Bell Centre (seen above ahead of an October Rangers-Canadiens game) thanks to new Quebec government restrictions:

MONTREAL – Faced with the spiraling rise of COVID-19 cases in the region, late this afternoon the Montreal Canadiens organization received a request from Quebec public health officials to host tonight’s game against the Philadelphia Flyers in a closed setting with no fans in attendance at the Bell Centre. We have accepted this request in order to help ensure the safety and security of our fans and fellow citizens throughout our community. An update on the status of Saturday’s scheduled game against the Boston Bruins will be provided tomorrow.

We have obtained assurances that beginning with our games in January, we will return to a partial capacity scenario and be able to host fans once more. More details will follow in the days to come and as the portrait of this ever-evolving pandemic becomes clearer. In the interim we would continue to encourage everyone to get vaccinated, get their booster shots when possible, and be responsible with their social and family gatherings throughout the holidays. We hope that with rigor and a collective effort from all of us, we will be able to come together in a near future in 2022.

Unsurprisingly, that provoked a lot of backlash from those who had already made plans to attend that game (and in some cases, were even already en route there). That can be seen in the replies to that Canadiens’ tweet:

We flew to Montreal from Calgary for this game today and the government pulls the rug out from under us. Ridiculous.

So a question……is anybody going to cover my 2 hotel rooms and my travel that I paid, for another game??? Making that announcement with such I’ll timing. C’mon Quebec Health and Canadians do better. Signed 3 very unhappy kids and their parents.

This certainly isn’t entirely the team’s fault, as this appears to have been as a result of a governmental push. And there’s some reason for that; the province reported 2,736 new infections Thursday morning, the most since January 2021, and then announced “3,700 new cases and counting” at a news conference Thursday at 6 p.m. Eastern. There’s also significant evidence that hockey arenas have some factors particularly suited to spread of COVID, which helps explain why there have been so many notable outbreaks and cancellations in the NHL. And while most of those studies are focused on on-ice spread rather than crowds, there’s still maybe a case for limiting hockey attendance more than even other indoor activities. But the sudden timing here is far from ideal, especially considering that NHL games are an event many people travel notable distances for. And it’s understandable why those who made plans to go to this game are ticked off.