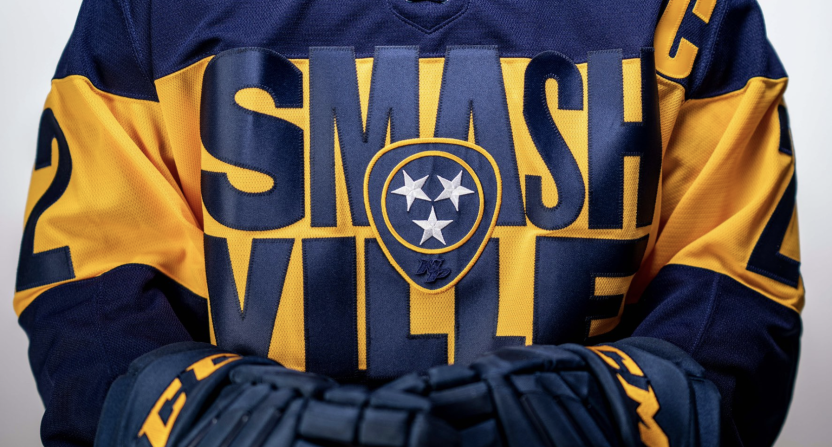 The New Jersey Devils caught a lot of flak over their alternative jersey that read “Jersey.” The Nashville Predators didn’t want them to feel alone, apparently.

Thursday, the Predators and Tampa Bay Lighting unveiled their Stadium Series jerseys that they’ll wear during an outdoor game in Tennessee in February. It’s one of three outdoor games for the NHL this year and, as always, a chance for the league and teams playing to draw attention to themselves.

Of course, if your jersey isn’t well-received, there’s a downside to all that attention. And the Predators are finding out about that with the reveal of their “Smashville” look.

The primary crest pays tribute to the fans with the SMASHVILLE mark, and the look was inspired by letterpress music posters which are part of Nashville's rich history.

In typical designer fashion, this time by Adidas, the designs and specifics included on the jersey all come with explanations of dubious intent.

The player’s name and number font feature digits and characters of different widths and weights as seen when mismatched letterpress blocks are used in letterpress music posters, and a streamlined colorway of navy and gold with minimal white detailing is also present.

The interior back neck graphic of the jersey is a stylized sound wave pattern evoking Music City, and a stadium-sized Predator logo will be on the right hip of the players’ pants.

Sure. Whatever. All we know is that NHL fans are not impressed and they made sure to voice their concerns on social media.

Hockey Twitter: "Ha, look at the Devils. They put JERSEY on the front of their jer–"

Nashville: "HOLD MY BEER THE SIZE OF THE MIGHTY APPALACHIANS" pic.twitter.com/KNsthx7AEF

Preds to Adidas: “How do we make sure they never ask for this again”

They knocked it out of the park…on their last outdoor look.

Can’t wait to see what team puts POUND
TOWN
on their jerseys next https://t.co/bmTG9a7wPh

maaaaan what the hell is this https://t.co/TQUdLNq9ha

These are — and I mean this in the nicest way possible — maybe the worst jerseys in the NHL’s 105-year history. Automatic locks for the top of worst jersey rankings for the rest of time. https://t.co/I2kZqmOglU

So bad has the reaction been that someone even started a Change.org petition to get them revised. A bit much, but, understandable.

For better or worse, we’re guessing the Predators are locked into these jerseys for the outdoor game. And while dunking on them might feel good, it’s important to note that the fine folks at Adidas are always happy you’re just talking about them, regardless of what you’re saying.