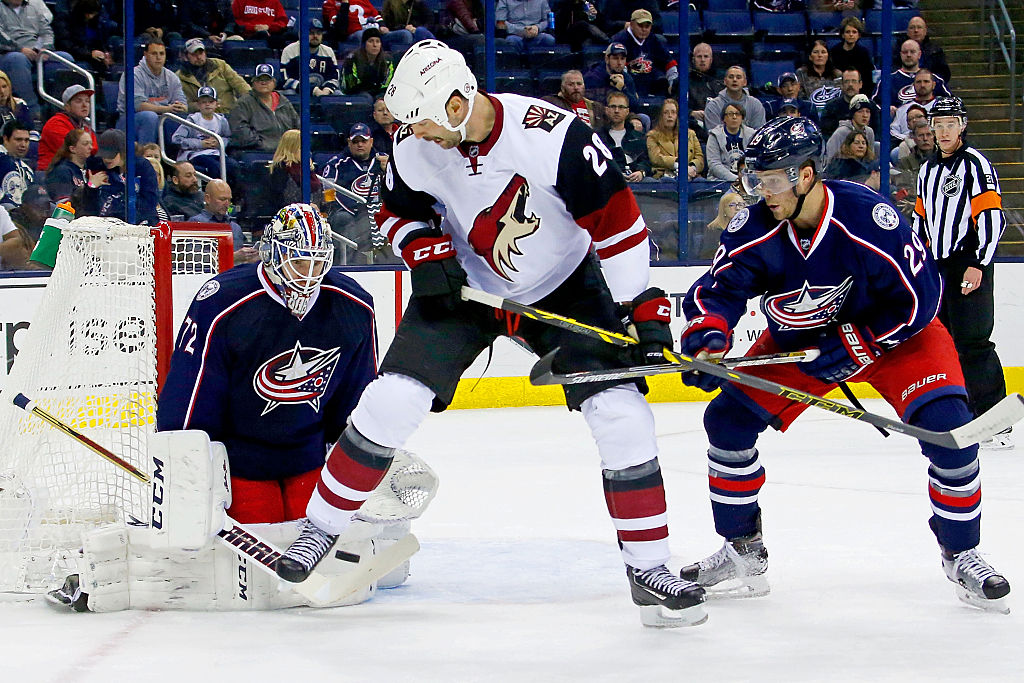 John Scott will play in the 2016 NHL All-Star Game. The fans voted him the captain of the Pacific Division team and, barring an arrest for an on-ice assault or a last-minute decision to withdraw, he will be on hand for the festivities in Nashville at the end of the month.

There has been pushback to this decision from fans and media sorts alike, as Scott has played just 11 games this season and has five goals and 542 penalty minutes in his career. An enforcer that has spent more time scratched or in the minors this season at an event with the sport’s elite? How can that be?

I have compiled nine arguments for why Scott should not be an All-Star, followed by all the reasons why they are wrong, and why this is the greatest thing to happen to an NHL All-Star Game in forever.

No way around it, when Sidney Crosby isn't an all-star and John Scott is, the system is broken.

The “NHL All-Star Game” could be rebranded “Sidney Crosby Presents: The Sidney Crosby All-Star Show” and Crosby would still find a way to avoid going. It’s not really a system issue, unless we are taking umbrage with the nervous system of Crosby that keeps him alive and allows him to choose to avoid All-Star Games whenever possible.

If Scott weren’t playing, that wouldn’t open a spot for Crosby, for they play in separate divisions. The system at question here is fan voting, which, yes, leads to Scott getting his All-Star spot the only way possible. But you can’t blame fans for not voting Crosby over Alex Ovechkin, as the latter is very popular.

The system did not prevent Crosby from playing; Crosby did.

Well, in relation to Scott, everyone is a skilled player, so yes, someone is getting shafted.

But who is that player? Mikkel Boedker? Max Domi? Oliver Ekman-Larsson? Because the Coyotes were always going to send one player only, and it was going to be one of those three players. If anyone desperately wanted one of those players in Nashville, anyone could have started a movement.

Boedker is tied for 40th in scoring while Domi is tied for 58th; there are three Pacific players, including the Kings’ Tyler Toffoli and his 19 goals, with more points than Boedker that aren’t All-Stars. Ekman-Larsson is second in the division in points, but is he a better defenseman than Brent Burns, the leading scorer in the division, Drew Doughty or Mark Giordano? Is this really a travesty?

The answer is no, so really, nobody got shafted.

If John Scott has any integrity whatsoever, he will turn down the honor of playing in the All-Star Game if he's voted in by 'fans'.

Ah, yes. Integrity. Because if there’s one thing All-Star Games are known for, it’s integrity.

What’s your favorite All-Star moment of integrity? Drunk dudes drafting teams on a stage in Columbus? Was integrity ever an issue when the whole of Latvia voted Zemgus freaking Girgensons to the game? Is Crosby’s integrity or anyone else’s ever questioned when they are begging out of going?

Did you know: The first NHL All-Star Game was held to raise money for Ace Bailey, who was so severely injured on a hit from behind Eddie Shore that he nearly died on the ice. Integrity!

Maybe it’s the event’s corporate sponsors that scream integrity, like the time-honored DraftKings NHL Accuracy Shooting, or the AMP Energy NHL Hardest Shot. Allowing #brands to attach their names to these hallowed events starting in 2009 has really enhanced the integrity the game always had.

The NHL All-Star Game ceased being a way for fans to see the best players in the world on the same ice for a weekend a long time ago, when it went corporate and became mostly about marketing, partnership revenue and raising #brand #profiles and creating #engagement on #social and #vertical #platforms with #casuals.

The presence of Scott is the best thing that could have happened to the league. For a league with a lengthy history of ignoring what fans want — like, less than three lockouts over the past 20 years — allowing Scott to play is the only thing about this game that has the slightest bit of integrity.

4. Nashville Predators GM David Poile said Scott being an All-Star would be “unfortunate,” “disruptive to the process” and “not an appropriate situation.”

Those are the type of quotes you’d expect to see when someone is asked about allowing a player under investigation for sexual assault to continue playing, but no, this is about a bad hockey player appearing in an a promotional exhibition.

You know what’s not an appropriate situation? Walking into a hockey arena bathroom with your pants off and asking if anyone has seen your pants.

A truly inappropriate situation would be trading a first-round pick for Cody Franson.

I wrote about all-star John Scott, "integrity", funny jokes, and at least being honest about what we're laughing at. https://t.co/GXUggg41ZS

Here’s what Sean says: “But it’s not a feel-good story. It’s a case of voting the unpopular kid as prom king so that everyone else can point and laugh, even if most of that pointing is aimed at the league that didn’t bother to fix its all-star game until it was too late.”

It’s almost exactly like that, but instead of the unpopular kid, it’s the middle school bully who would have been a sophomore in high school except he failed seventh grade twice. And instead of voting him prom king, the class decided to award him a spot on the school’s championship hockey team that gets to go to a tournament in Disneyland for a long weekend. That’s hardly pouring a bucket of blood on Scott’s head while the entire student body laughs at him. (Ed note: Blood? A whole bucket? Dave, what the hell school did you go to?!?)

I’m totally OK with laughing at Scott during all this because a) he seems to have a great sense of humor about this, even if this didn’t start all in good fun, and b) he has tried to kill Loui Eriksson, Phil Kessel and Tim Jackman, and I’m still not entirely positive Jackman was revived after that cheap shot. If being voted to the All-Star Game is the worst thing to happen to Scott during this calendar year, that’s a hell of a year.

This is a common sentiment. There are three problems with this analogy.

1. Trump chose to run for President; Scott did not ask for this.

2. Scott has never said he wants to bar Finns, Swedes, Russians or any other people from being part of the NHL.

@timandsid Trying to imagine how I'll explain John Scott making the #16ASG and not Sid to my grand kids in 30 years.

“Fans voted for Scott. Crosby didn’t feel like it.”

I hope that 30-year-old isn’t too devastated.

Didn’t everyone think John Scott was “bad for the game” fairly recently? You couldn’t pay me to watch the NHL all-star game.

Here is a complete list of things that are bad for hockey: