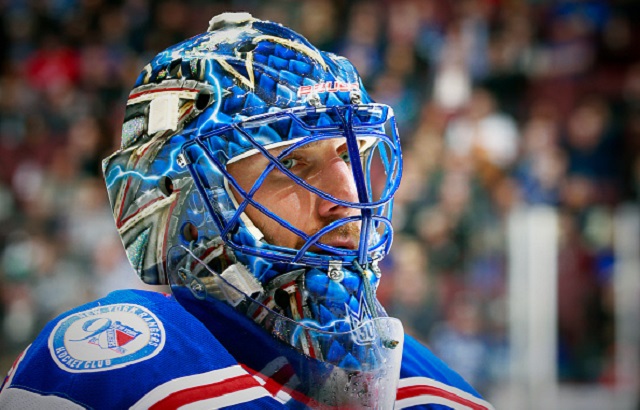 The NHL Mailbag is here once again and we’ve got some good questions this week. What should the goalie skills competition be at the All-Star Game? Why are people panicking about a lack of goals? Which movie trilogy should have stopped after the first movie? And is Westworld good? Mailbag, my friends!

@davelozo Idea I've been thinking about: adding a skills competition for goalies at the All-Star game. But what?

Goaltenders have to shoot a puck into an empty net from just outside their crease. Once they score twice, they skate down to the other end of the ice and have to hit the four targets like the regular accuracy shooting.

It’s a flop-off that’s judged by one person from each division. To add to the fun, local kids are the ones that bump into the goaltenders to send them flying.

A puck is shot past the goaltender, who then must glare at a teammate near the crease he feels is responsible for the goal. Points are awarded for exasperation, disappointment and anger. Brodeur is the judge.

How do I continue to give these ideas away for free?

@davelozo what scenario has to occur for Gerard Gallant to not be coaching in Las Vegas next season?

If Gallant is coaching Las… sorry… just VEGAS next year, I will bike from New Jersey to LAS Vegas for the home opener next season. He’s too good to take that job. He has a two-year deal, so there’s no rush. He will take another, better job.

This is great, because either I’m right or I’ll get some good exercise and wind up in Vegas.

@davelozo which movie trilogies should have ended after part 1?

@davelozo @CraigCustance do you believe there's a curse for teams who touch the Conference championships ?

Absolutely. I believe if you touch the trophy, your team is cursed. I believe in witches and an invisible man in the sky who watches everything you do. I believe four-leaf clovers are lucky and throwing money into a fountain will lead to wishes coming true. I believe shooting stars grant wishes too. I believe in signs. I believe that at the end of a rainbow is a magical pot of gold guarded by a leprechaun that makes you answer three riddles. I believe in mystique, aura and karma. I believe the talking pictures on my movie picture box can see me.

Now if you’ll excuse me, I need to send out some thoughts and prayers to make the world a better place.

@davelozo Is Westworld actually a good, smart show or am I just watching it because GoT is off the air

It’s not good. I gave it 10 episodes. There’s no way a show that telegraphs all its twists can be considered good. It’s the latest HBO show with a great premise that doesn’t deliver on it.

My theory as to why people think it’s a great show is rooted in the idea that it’s intentionally tricking you into thinking so, thanks to three devices.

— Haunting music: Take any piece of 1990s or 2000s music and have it played by a piano, and suddenly that shitty-ass Radiohead song seems deep, meaningful and good. Imagine playing the actual “Black Hole Sun” over an old-west gunfight and not laughing your genitals off. Somehow, hearing it played on a piano makes it seem highbrow. It’s not. You know what shows play music at the end of each episode to play with your emotions? Bad ones. Fucking Castle does this. Westworld is not good.

Game of Thrones can’t get back on my TV soon enough.

@davelozo An American player wins Hart, Conn Smythe, and Olympic Gold in 2018. Is he a finalist for SI Sportsman of Year? #pleaselikemysport

It really depends on how the horses do that year. And what about e-sports? Maybe a dude will pull off the Castlevania, Tetris, Pitfall trifecta. It’s way too hard to say for certain, this early in the process.

@davelozo why is Kris Letang never in the conversation for the Norris?

Letang finished fourth in voting last year and was a finalist in 2013. Find better conversations.

@davelozo How much should I drink to cope with my relatives this holiday season? Why are people freaking out over a "slump" in NHL scoring?

Maybe you don’t think this is anything more than a slump because you’re young? I have no idea, but I wonder if so many hockey fans don’t care about this lack of goals because it’s all you’ve ever known. Of all the ways to flaunt your youth in my face, not being perpetually disappointed by the NHL’s lack of offense is the most hurtful to me. Please stick to the classics, like having all your hair, never getting hung over and having hope about the future.

Oh, and to answer the other question — booze and lots of it. That probably makes watching 2-1 NHL games more tolerable too.