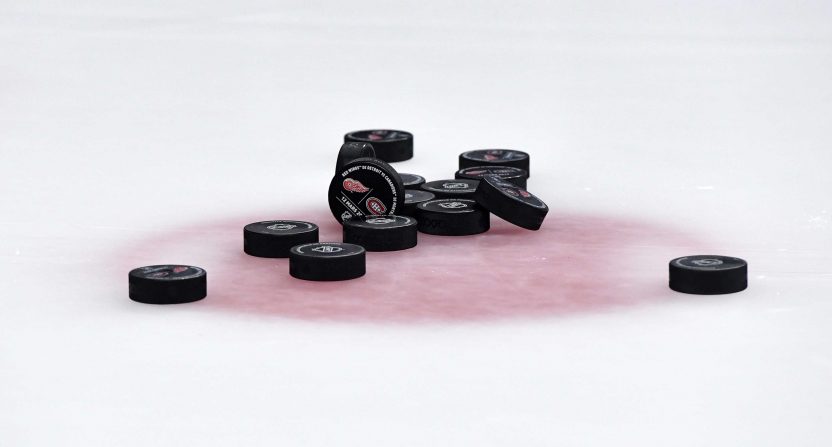 The spread of COVID-19 in the United States has forced every major sports league to close its doors. The NHL is no exception, and now exists in an awkward spot where they’ve played a large majority of their season, but may not be able to award the Stanley Cup.

Now, before diving too much deeper into this conversation, it’s worth noting that this whole discussion is small potatoes compared to what’s happening in the world. The Stanley Cup, the NHL, and the sport of hockey as a whole doesn’t matter much when overcrowded hospitals and a widespread infection is on the line. Hockey can wait. These are mostly unprecedented times.

But, discussing the what-ifs and what could happen when hockey eventually resumes can be a nice distraction.

NHL teams had anywhere from 11 to 13 games left on their 2019-20 schedules when the season was put on pause. We were in the thick of a wild showdown that saw some teams bouncing in and out of the playoff picture on a daily basis. The top of the pack was just as volatile with multiple teams challenging for the Western Conference lead.

Let’s say that this disruption only lasts a few weeks and the NHL is able to resume play sooner than later. That’d be an absolute best-case scenario (albeit a very unrealistic scenario at the moment). Under that assumption, the NHL should be able to squeeze in the remainder of the season and the full playoff schedule. There would inevitably be some hiccups with arena availability and other issues, but it could be handled with relative ease. Reports suggested the league was in talks with each team over arena availability in July. Last year’s NHL Final ended on June 12, meaning the league would be theoretically looking at contingency plans assuming a one-month delay.

But what if this shutdown stretches out a couple of months or even longer? That’s where things begin to get complicated. At what point will the NHL determine it’s been too long to realistically complete the season in its entirety?

If there’s one thing the NHL knows how to handle, its abbreviated seasons. By their own doing and due to their inability to avoid lockouts, they’ve ended up with multiple shortened seasons since the early 1990s. This one would be a bit different as the season is already in progress. Starting fresh with a shortened schedule is much more straight forward compared to the situation the NHL is currently in.

The league would love to award the Stanley Cup, but they’d have to do so in a manner that’s fair to all teams involved. Teams have already invested so much into the current season that no one would allow a “playoffs start today” scenario, seeing as so many organizations are still within striking distance of a playoff berth. You can’t realistically and fairly determine who is in and who is out.

The two most realistic scenarios are as follows:

One less likely outcome would be the NHL delaying the current season as much as they can and then shortening the 2020-21 season, but that feels like a poor idea since it would impact two seasons rather than one. The NHL has to hope they’ll be able to run 2020-21 as planned and won’t make any decisions that could jeopardize what will be, in theory, a normal season.

What’s the most likely outcome? Unfortunately, this falls squarely into one of those “plan for the worst, hope for the best” situations. Based on what’s happening in other countries, and assuming the United States follows a similar trajectory, the current NHL season may be toast. The league already has a date circled on the calendar where they’ll nix the season, but what that date is is anyone’s guess. We’d imagine they wouldn’t let games for the current season go past July. That would mean things need to be up and running within a month of when the season was halted.