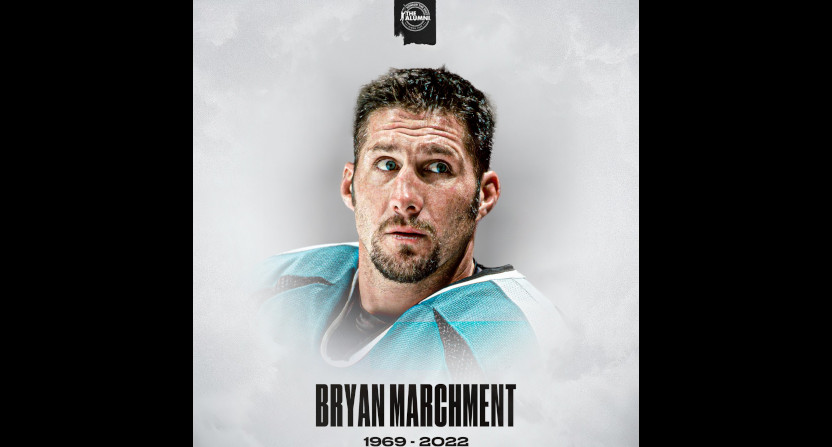 The NHL world lost a notable figure this week, and one who was set to play a role in this year’s draft. San Jose Sharks‘ scout Bryan Marchment, who played in the NHL from 1989-2006 with nine different teams, was in Montreal for the draft, which begins Thursday night. But news came out Wednesday that Marchment had unexpectedly passed away:

That led to many notable tributes to Marchment from across the hockey world:

Shocked by Bryan Marchment's sudden passing. Glad I had the chance to profile him in @SInow. Unapologetic, forthcoming … everything you hope for in a subject. Noted he "had been suspended more often than disbelief." Mush, an original.

As a writer, I loved dealing with Bryan Marchment.
He was meat and potatoes. Didn’t waste words. Fair and honest.
You didn’t like his style?
“Go play tennis.”
I will miss Mush. RIP.

"It’s a sad day for me personally and a very sad day for a lot of people in our organization. Anyone who knew Bryan knew the type of man he was. He was an honest, down-to-earth, loving person … (1/3)

… If I ever needed anything, even if it was a home-cooked dinner instead of eating out every day, he and Kim would have me over. It is a very difficult day.” (3/3)

The world is a lesser place today. Bryan Marchment will be missed by all who knew him. Condolences to Kim, Mason, and the entire family. #RIP https://t.co/i95SvUtpwm

The NHL Alumni Association is devastated to learn that Bryan Marchment has passed away at the age of 53.

Bryan was drafted 16th overall in the 1987 @NHL Entry Draft to the @NHLJets. Known for his unforgiving hits, Marchment went on to play in 926 regular-season… pic.twitter.com/5rAcQBrtXA

Bill Zito on the passing of Bryan Marchment: "It's heartbreaking. Obviously our thoughts and prayers go out to Mason and his family."

Bryan Marchment was once named the most hated man in hockey. But after his shocking death Wednesday, those who knew him well said he was a far different person off of the ice. "You had to know him to feel how much he cared about everybody.”https://t.co/AobjoLYz4O via @mercnews

(2/2) "Our deepest thoughts are with his wife Kim, kids Mason and Logan, and Bryan's parents and his extended family."

We were lucky enough to work with Bryan Marchment once while he was in Edmonton. When we sat down with him for the signing he said; "Not sure why anyone would want this "S%!&" but you're here so I guess they do." He was fantastic to work with. RIP Mush, condolences to his family. pic.twitter.com/zF2s5IYo9n

Marchment had been scouting for the Sharks since 2008. His son, Mason, 27, is a forward for the Florida Panthers. Bryan spoke to Colby Guy of Florida Hockey Now about his son earlier this year:

“Hockey aside, he always hated to lose in anything he did and he still does. That’s where he gets it from,” Bryan Marchment said. “Whether he is playing board games, lawn darts or cards, he hates to lose. So when he started playing, he had that gamesmanship down.”

As for the elder Marchment, Curtis Pashelka of San Jose newspaper The Mercury News collected some nice tributes to him Wednesday. Here are a couple of those:

Sharks goaltending coach Evgeni Nabokov, who was teammates with Marchment for three-plus seasons, said the two face-timed each other two days ago in advance of the team’s development camp next weekend.

“He was just a guy with a big heart. You had to know him to feel how much he cared about everybody,” Nabokov said. “I just saw him two days ago and we were talking about development camp, this and that. He always would finish his conversation with one thing. He would say, ‘I love you brother. See you later,’ you know? Now (he’s) gone.”

Fellow Sharks development coach Mike Ricci, who was also born in Scarborough, wrote via text, “He was a great man and teammate and friend and family man. The best. A guy you want in your foxhole.”

Marchment will certainly be missed by many in the sports world, and by many with the Sharks. Grier, who only was announced as their GM Tuesday, now faces the difficult challenge of guiding them through a draft without one of their long-time scouting figures.

[The Mercury News; image from the NHL Alumni Association on Twitter]