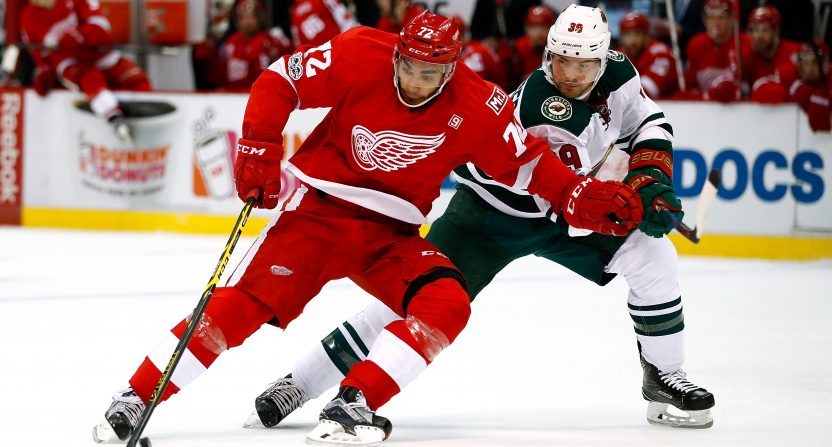 As has been abundantly clear for months, the Detroit Red Wings will not qualify for the Stanley Cup Playoffs this year for the first time since 1990. The 25-year stretch of dominance is not the longest playoff streak in NHL history, but considering the era and the changes that have occurred during that time, it’s arguably the most impressive. In fact, one could make the point that it’s on the short list for most impressive streaks in North American professional sports history, full stop.

To illustrate the absurdity of the length of Detroit’s streak, just look at who now tops the active leader board for longest playoff streak. Pittsburgh is now up to 11 years in a row, Chicago recently clinched their ninth straight trip and St. Louis appears close to locking down their sixth playoff trip in a row. Combined, that’s a total of 26 years. Or just one more than the Red Wings alone. In fact, only two other teams (Minnesota and Anaheim) have made it five years in a row. It’s a Herculean task to qualify for the postseason one-fifth as many times as Detroit did.

The simplest way to argue across the other three major sports leagues – the NFL, NBA and MLB – is to just say that no team in any of those leagues has ever made the playoffs 25 years in a row. But each league is different and comes with its own set of challenges. MLB’s postseason only featured four teams until as recently as 1993. The number now is still only 10. The NFL has 12 and a grueling system of constant roster turnover. The nature of the NBA would seem to make it easier for long streaks to occur, but the longest ever is the Spurs’ current 20-year streak. The longest in NFL history is nine and it’s 14 in MLB.

What helps set the Red Wings apart is actually similar to what has helped the Spurs succeed in the NBA: seamless transitions between eras.

The beginning of the streak traces back to a time before Detroit had many of what would become their signature stars. Nicklas Lidstrom was not yet up on the big club. Early prime Steve Yzerman and 21-year-old Sergei Fedorov were the team’s top players. The next year would mark the debuts of Lidstrom and Vladamir Konstantinov (who was unfortunately paralyzed in a car accident just after helping the Wings win the 1997 Stanley Cup).

Detroit continued to improve before reaching the Stanley Cup Final in 1995 and being swept at the hands of New Jersey. The team broke the league’s all-time win record (62) in 1995-96, but again could not come away with a Cup, losing in the conference finals to Colorado. But the following 1996-97 season, the Wings won the franchise’s first title in five decades and then repeated in 1998. They won again in 2002 and with an almost entirely different team in 2008. In all, the Wings played in six Stanley Cup Finals and eight conference finals during the streak. They won 14 division titles and garnered 100 points in 17 different seasons.

The early core of Yzerman/Lidstrom/Fedorov/Brendan Shanahan/Igor Larionov/Chris Osgood slowly gave way to the likes of Pavel Datsyuk and Henrik Zetterberg era (during which Lidstrom was very much still a cornerstone until 2010 or so).

There’s a theme here and it underscores why Detroit was ahead of the curve and why they were able to stay dominant for so long. Lidstrom was a third-round pick, Fedorov a fourth. Datsyuk went undrafted once before going in the sixth round in 1998. Zetterberg lasted until the seventh round in 1999.

Behind general manager Jimmy Devellano, the Red Wings tapped into the European market before anyone else, and then understood and dominated that aspect of the draft for a decade. It allowed them to kickstart their 90s dynasty and then gave them the ability to extend their dominance into the late-aughts and 2010s.

Meanwhile, nearly any veteran looking to win a Cup over the last quarter-century found their way onto Detroit’s roster at some point. Owner Mike Ilitch loved superstar talent and didn’t mind paying well for it, while Devellano, Bryan Murray, Scotty Bowman and Ken Holland continued to draft well and make key trades that built those teams. The list of All-Stars and big names to play for the Red Wings over the course of the streak reads like an extended who’s who of 80s, 90s and 2000s hockey.

For most of the last quarter-century, the Red Wings mattered more than any other team in hockey. For good reason – they revolutionized the international scouting process and introduced a style of play that hadn’t yet been seen at the NHL level. They made the playoffs 14 years in a row before the full-season work stoppage, were one of the biggest losers of the new post-lockout salary cap and still made the playoffs 11 years in a row after that. Detroit was the model franchise for two decades.

The future may yet be bright in Detroit with the likes of Dylan Larkin, Petr Mrazek, Andreas Athanasiou and others in tow as the Red Wings move into a new arena next season. But even if that doesn’t work out as planned, the past is certainly worth celebrating, setting an extremely high bar for success.