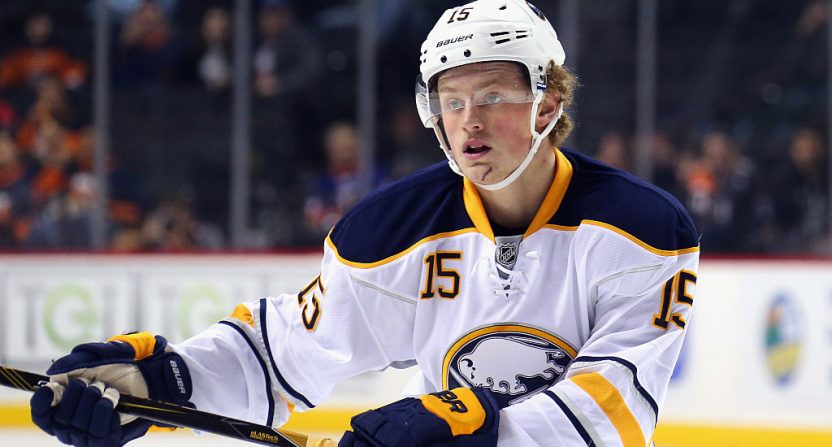 The Buffalo Sabres are about to enter their third season with Dan Bylsma as head coach, Tim Murray as general manager and Jack Eichel as the face of the franchise. So far, rebuilding the team back to respectability has failed and according to a recent report, it’s about to get much trickier.

According to Paul Hamilton of WGR-AM 550 in Buffalo, Eichel reportedly won’t sign an extension if Bylsma is still in place behind the bench.

“Inside sources have told me that Eichel has no desire to sign a contract extension this summer if Bylsma remains the coach, so quite a bit hinges on this meeting.”

The report should be taken with a big grain of salt, but Eichel’s frustration is understandable. The Sabres stink. They’ve failed to capture 40 wins in back-to-back seasons while missing the playoffs by a fair margin. Adding fuel to the fire is seeing their crosstown rival Toronto Maple Leafs accelerate their rebuild with the coach who was supposed to take over in Buffalo before a last-minute change nixed that idea.

It’s also got to sting for Eichel to see Connor McDavid, the only player taken ahead of him in the 2015 draft, tearing it up with capable linemates and making his first NHL playoff appearance.

Eichel is a generational talent whose abilities aren’t getting maximized under Bylsma or Murray. Despite appearing in only 61 games, Eichel led the Sabres with 57 points(and was one of two players to hit 50). Besides Eichel, Ryan O’Reilly, Sam Reinhart, Kyle Okposo, Rasmus Ristolainen, Evander Kane and Robin Lehner, there’s a shocking lack of depth. Far too many non-NHLers appeared in multiple games in Buffalo. Murray has done a poor job of surrounding Eichel with capable supplementary scoring.

Furthermore, Eichel has another reason to be pissed at the Sabres. He missed a $2 million bonus by a 0.005 margin after finishing 11th in points per game. With more talent and better coaching decisions, he might have hit that goal. However, it’s speculative to assume a bonus has anything to do with a reported grievance, but it’s certainly worth noting.

Eichel’s agent denies that his client is looking to boot Bylsma.

"They are ridiculous," Jack Eichel's agent, Peter Fish, on the report. "This whole situation is very misunderstood." https://t.co/E0dy35jBkM

Ultimately, the franchise needs a player like Eichel, while Bylsma is expendable. In a perfect world, Eichel would act in harmony with his head coach. But losing adds up. Bylsma hasn’t shown he can successfully lead the Sabres back into Stanley Cup contention and if Eichel, the team’s best player, doesn’t want him around, you have to at least consider cutting him loose.

All-in-all, we won’t know the true story until A) Bylsma gets fired or B) Murray clarifies the situation. But one thing’s for certain: The Sabres are a mess and wasting key years of one of the league’s best players. The organization needs to do better by Eichel. Otherwise, when he doesn’t sign that extension and bolts in free agency, they’ll have nobody to blame but themselves.