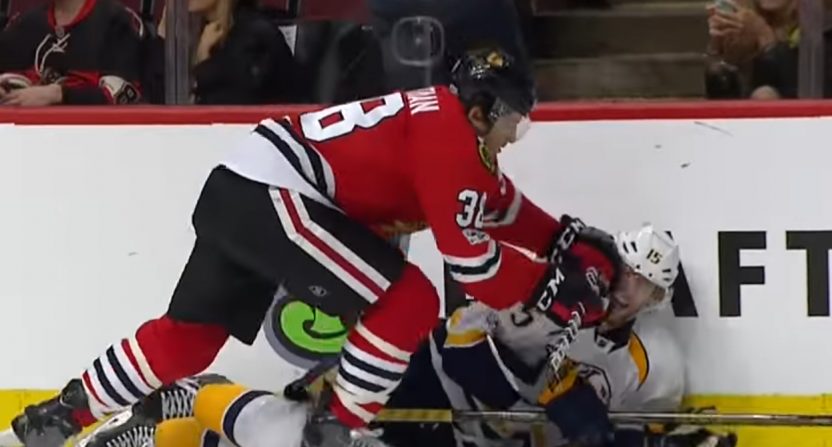 Things don’t look good if you’re a fan of the Chicago Blackhawks. After the dust settled on a lopsided Game 2 in the opening round between the Blackhawks and Nashville Predators, the Blackhawks found themselves in a big 2-0 hole and have yet to light the lamp in the series.

As we’ve already seen with the Matt Calvert incident which occurred in Game 2 between the Blue Jackets and Penguins, frustrations tend to boil over in an ugly way when a team is being completely dominated.

Ryan Hartman lost his cool as his team was trailing 5-0 late in the third, using two hands to hit Craig Smith in the face after he was already down on the ice.

Hartman picked up a game misconduct on the play.

The initial hit looked good, but his shot to Smith’s face is over the line and deserves to be punished further. Calvert only picked up a one-game suspension for his actions (a decision which is pretty ridiculous), so it’s difficult to predict whether Hartman will pick up anything else from the league.

Regardless, the Blackhawks are hurting in a big way even if the NHL decides to let this one go. It’s never a good sign when the opposing goaltender, Pekka Rinne, has more points through two playoff games than your entire roster.