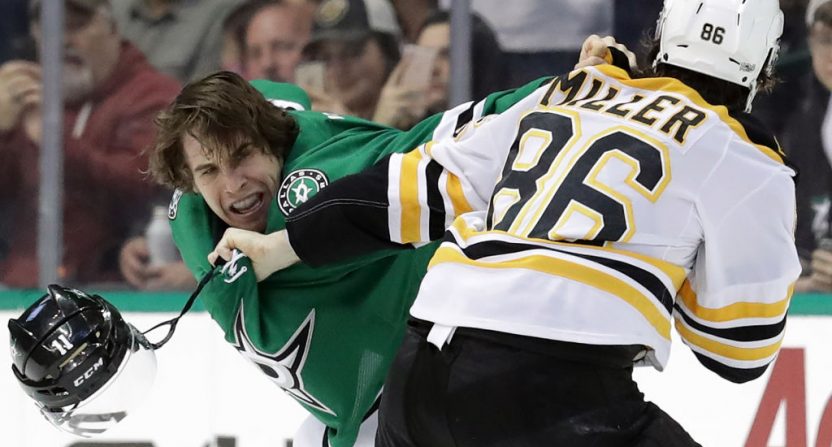 Welcome to Hockey Fights of the Week! If you’re new to this column (which has previously run over on our sister site, Puck Drunk Love), the premise here is pretty simple. Each week, we gather up the five best fights from the previous week in the NHL, rank them and present them to you for your viewing enjoyment. That’s it!

Now, sit back and enjoy some quality hockey altercations!

During a game in which David Backes and Jamie Benn also fought, no one would have expected Miller and McKenzie to steal the show. That’s exactly what happened as the two non-captains put on a spirited performance while the marquee Backes-Benn tilt failed to deliver.

Miller’s first punch was enough to earn him the win. His first shot knocked the helmet completely off of McKenzie and we’ve got to admit that it was pretty awesome.

Wilson-Fisher is a pretty intriguing matchup on paper. Both have plenty of experience when it comes to the physical side of the game and all signs indicated this should be a close one. Well, that wasn’t exactly the case.

Once all the hugging ended, Fisher was the first one to break free and catch Wilson with some blows. Wilson wasn’t a complete pushover, but he came up short in a battle we’d love to see again.

Carter isn’t thought of as a fighter and you can see why when he dropped his gloves against Kesler. This was only Carter’s third fight in his NHL career and his first since the 2010-11 season. Meanwhile, Kesler had already fought twice heading into this one with Carter.

Long story short, one big punch was all Kesler needed to drop Carter.

Johansen has had a pretty strong season with the Columbus Blue Jackets, but this fight probably won’t make his end of year highlight reel. Bennett has the edge in this scrap from start to finish, but perhaps the most interesting aspect of this tangle was that the officials let this one continue despite both players falling to the ice multiple times.

How often have we seen officials step in too early, ruining a good fight? For that very reason, we’re giving the guys in black and white the unofficial victory while Bennett picks up a convincing win of his own.

Hockey is loaded with exciting moments, but one of the best occurs when two players chuck their equipment and square off near the middle of the ice. Dillon and LaBate receive high marks in the “equipment toss” category and then put on a solid show when the punches start flying.

LaBate starts off really well, landing a couple big shots as soon as the fight begins. From there, Dillon grabs control and ends up avoiding most of LaBate’s attempts. It’s tough to tell just how many punches found their mark, but it’s clear Dillon caught LaBate with several good ones.

[If you’re interested in the best hockey fights from previous weeks of the NHL season, check out our archive.]