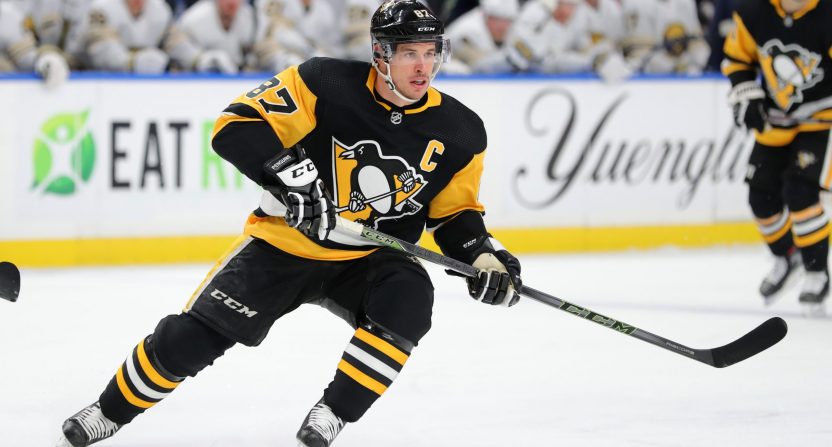 Wayne Gretzky is widely considered the greatest hockey player of all-time. Unlike most other sports, hockey entertains little debate over its GOAT status. Gretzky was so statistically dominant that he’s made it difficult for others (like Mario Lemieux, a legitimate contender) to enter the discussion.

His ridiculous 2,857 point total is nearly 1,000 points ahead of second-place Jaromir Jagr. He holds the record for most all-time assists and goals. He scored more than 200 points in a season three times. Of the top 11 single-season scoring performances in NHL history, nine come from Gretzky. He won nine Hart Trophies and four Stanley Cups.

Gretzky’s GOAT case can feel unassailable. But I am here to make an argument to the contrary: Sidney Crosby is, in fact, the greatest hockey player ever, and deserves to usurp Gretzky’s title. I do not say this to diminish past eras of hockey or Gretzky’s accomplishments — it remains true that Gretzky is the most dominant player ever, and arguably the most dominant team-sport athlete we’ve ever seen. From a purely hockey perspective, though, Crosby is the superior player.

It is almost heresy in the hockey world to push back on Gretzky’s legacy. He is almost a mythical figure, a force so much greater than his contemporaries that he is uniquely positioned to assume god-tier status. My argument is based on Crosby’s era, with significantly higher-quality hockey, and his complete set of skills, primarily an otherworldly IQ that bests even Gretzky’s.

I will admit (and you’ve probably already guessed) that I am too young to have experienced Gretzky live. I have watched multiple full games of Gretzky — primarily Stanley Cup games, including Game 5 of the 1985 Finals, an 8-3 series-clinching win — to compare. I formed my opinion after watching ‘80s hockey, not before. There is not wide-ranging publically-available analytics for Gretzky’s era, so I don’t have many statistics to cite. This is a product of the eye test.

I’m also aware that Crosby would probably not be a fan of someone saying he’s better than Gretzky. Hockey players are humble people. Nevertheless, I will make my case.

And remember that this doesn’t actually mean all that much in the grand scheme of things. This is an opportunity to appreciate and compare greatness.

Crosby’s skillset, and how it compares to Gretzky’s

Crosby’s impact on the ice is greater than any player ever. The most important thing in hockey is possession, and Crosby drives possession in ways that no other player can match.

His toolbox is extensive. He has a unique ability to shield the puck and keep his head up, warding off defenders and creating passing lanes. Taken as a whole, his physical gifts help breed a player who is always one step ahead of every other player on the ice. When there’s a quick, incisive pass to be made or a hole in the defense to exploit, Crosby not only realizes it but also knows how to execute it.

Everything is clean and precise for Sid:

Nothing in the above clip stands out as particularly difficult, but part of appreciating greatness is watching the ordinary plays. Crosby is doing everything at a quicker pace and making it look simple. He knows that when he circles to the point, he gives John Marino a spot to receive the puck, and thus hold onto possession. His understanding of what impact his actions have, and how to weaponize that knowledge, is the root of his talent.

One could certainly say similar things about Gretzky. He glided on the ice, and was a majestic figure who was always more agile and graceful than everyone else. You get the sense that he was dramatically better than his peers when you watch him. Every pass was on point, every shift appearing goal dangerous.

It’s possible that Gretzky was a faster skater than Crosby, though it’s hard to say for sure. I don’t perceive a wide gap in pure speed. But Crosby is famous for never skipping leg day, and it’s in that area — his stout base, churning legs, and subtle strength — that he separates himself. Crosby’s physicality assures that he almost never loses battles on the boards or in contested areas.

Both can be considered experts at weaponizing their puck skills. Extraordinary puck-handling and stick work comes with the territory for all-time great forwards. Gretzky was an expert at finagling his way through gaps, and Crosby might have the greatest backhand we’ve ever seen. Never forget that Crosby once scored a goal with a one-hand backhand.

Physicality, though, is a big part of what makes Crosby so good. Gretzky didn’t have the pure strength and power that Crosby has. That physicality allows Crosby to further maximize his incredible decision-making and puck-handling. Part of the reason he can execute his ideas so well is that he’s able to ward off defenders and keep the puck.

The trouble with eras

‘80s hockey, as you might know, was pretty nuts. Goals were flying at unprecedented rates. Scoring was easier than ever, for a multitude of reasons: goalies had tiny equipment and generally had little idea how to stop the puck (they hadn’t discovered the butterfly yet); forwards didn’t try to play defense; coaches kept players out for longer shifts and didn’t implement much defensive strategy.

Another understated cause of the scoring outbreak from the 80s until the mid-90s was the simple fact of the players being worse than they are now. Quality in sports goes up over time, and the difference in quality is more apparent in hockey than in any other sport. The game looks so much different today in part because the players are simply better. They skate better, pass better, think the game better. Everything moves faster.

It’s hard to watch Gretzky’s games without noticing how much easier he had it. Players could skate into the neutral zone and wind up for a slap shot without any defender challenging them. If you’re really good, as Gretzky was, goals will come quickly in that set-up. It’s clear that Gretzky had incredible hockey sense, but it’s easy to make great passes when no one is really putting any pressure on you.

Things are considerably harder for Crosby. He has someone on him all the time. Forwards actually track back on defense now, and coaches design complex game-plans (like the neutral zone trap). Gretzky never had to play defense himself. Crosby is one of the best two-way forwards in the game, with an incredible sense of where to be in the defensive zone.

Gretzky absolutely obliterated his era. It’s hard to punish him for living when he did. But to succeed the way Crosby has in the 21st-century, you simply have to be a better player. Gretzky did everything he could possibly do to be considered the greatest of all time, and yet for me, Crosby has surpassed him.

It simply requires more skill in today’s environment to be a transcendent player. In a battle between two absolute legends, the winner has to be the one who faced more difficult competition. Crosby combines career achievement, having won almost every trophy possible, and a vast skillset, besting Gretzky in numerous areas even without the video game scoring numbers. Sid may not take the “Great One” title, but he deserves to be considered the GOAT.