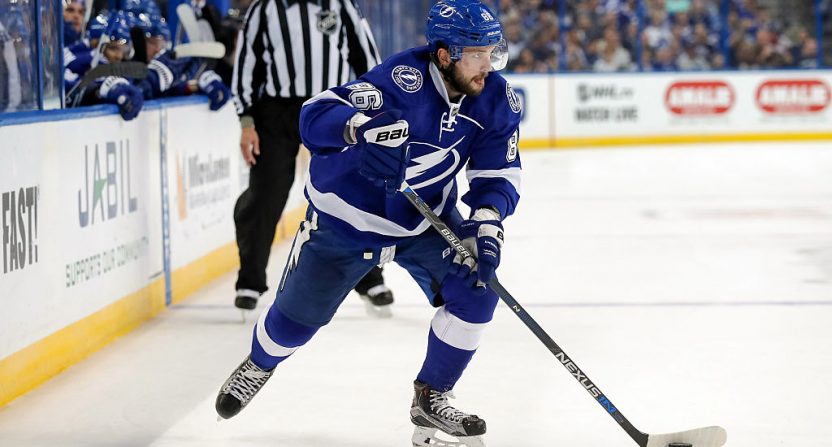 The window may be starting to close on the Tampa Bay Lightning. After falling to the Washington Capitals, the Lightning find themselves in an awkward spot where the underachieving label is starting to look more and more accurate.

But first, let’s look back.

When the Capitals were upset by Montreal in a one-eight first-round matchup as Presidents’ Trophy winners in the 2010 NHL playoffs, a reputation was born. The team had twice previously been upset in the playoffs the past two seasons, but never quite to this degree.

The team became the butt of countless jokes as the reputation grew through another collapse as the one seed in 2011, an ill-advised team makeover, a playoff miss in 2014 and then back-to-back second-round losses as Presidents’ Trophy winners in 2016 and 2017.

But regardless of how this Stanley Cup goes, they’ve (likely) put all that in the past. They overcame a 2-0 deficit in the first round, took down their chief tormentors in Pittsburgh in the second round and came back from a 3-2 deficit in the conference final to defeat Tampa Bay. Even a loss to the upstart Golden Knights couldn’t ruin this spring run.

So, as is stipulated by the unwritten rules of sports and social media, we’re going to need a new punching bag. No one will ever rival the Capitals run of losing as the higher seed eight times, but someone has to take the mantle of team who forces us to discuss windows and playoff performance and legacy.

Obviously, the Penguins are out. The Bruins have too many key guys from the 2011 Cup team left. While it’d be fun to start worrying about Toronto, it’s probably too soon. The Rangers are dead, and the Flyers…well, no sense in wondering about them. In the West, LA and Chicago have won it already. The Sharks exercised enough of their demons in 2016. Anaheim has Carlyle’d themselves into fringe contender status. It’s too soon for Nashville and too late for the Blues.

But Tampa Bay? It might take another year of not winning, but I think the Lightning fit the mold. And while this team has been far more successful than Washington over the past five years, they haven’t achieved the ultimate goal. Something they’ve been more than capable of doing on multiple occasions.

The Lightning were on the losing side of Washington’s conference final conquest. In fact, it’s the third time in the Stamkos era that the Lightning have lost in Game 7 of the conference final. They’ve also won a Game 7, over the Rangers in 2015, but that led to a Cup Final loss.

The Lightning’s first run of the Stamkos era came in 2011, when they made a surprise appearance in the conference final. They were actually one of the teams who upset Washington, when they swept them in the second round that year. They were led by the ultimate unsustainable hot goalie in Dwayne Roloson, who had just turned 107. That team barely resembles the current squad. Really only Stamkos and Victor Hedman are left. That squad certainly wasn’t capable of winning the Cup and probably wouldn’t have even have made it out of the first round if it weren’t for Sidney Crosby and Evgeni Malkin being hurt.

The team obviously fell off from there, and only emerged again three years later with a stacked prospect pool. They made the playoffs in 2014, but were swept in the first round.

But everything would change in 2014-15. Anton Stralman joined the fold to form a formidable one-two punch with Hedman, who was quickly becoming a top-five defenseman. The Triplet line of Ondrej Palat, Tyler Johnson and Nikita Kucherov emerged, and was suddenly as good as any group in hockey. Stamkos, of course, remained a dangerous scorer while the depth was filled out with capable players on nearly every line (save for Brenden Morrow, of course).

The team made it all the way to the Stanley Cup Final before being blown over by the last gasp of the Blackhawk dynasty. There didn’t seem to be much disappointment, however. Much of the hockey world saw them as a collection of the early-to-mid 20-somethings with their best days ahead of them. They’d certainly be back and definitely win one eventually.

But they started slow the following season, and seemed to have trouble ever recovering. They barely made the playoffs with 97 points, but turned things around once they got there, beating Detroit and the Islanders to get back to the conference final, all while Stamkos recovered from a blood clot. He would return during the matchup with the Penguins, but the team suffered a Game 7 loss despite his presence.

Stamkos obviously returned last year after a dragged-out contract negotiation, but barely played due to a knee injury. The team struggled in a number of areas and finished the season with 94 points, just outside of the playoff picture.

This year was obviously a positive for the franchise. Stamkos was healthy and blew away his career high in assists. Kucherov established himself as one of the league’s most-prolific scorers. They seemingly made out like bandits in the Jonathan Drouin-Mikhail Sergachev trade. Andrei Vasilevskiy put up great numbers, despite a shaky second half.

There’s no reason to think this version of the Lightning couldn’t win the Cup. But not every team that is capable of winning it all actually does. Just ask Anaheim, Vancouver and San Jose fans about that. Sometimes an era comes and goes and we wonder how a group of guys never won one together.

Part of that is things change faster than we think they will. Teams go from contender to fringe playoff team to bad quickly, and fans are rarely ready for that. The salary cap, players’ tendency to drop of earlier than we think, injuries, mismanagement and luck work in unison to steal years of contention we thought these teams had.

This isn’t an obituary for the Stamkos era. That would be ridiculous, considering how young so many key pieces on the Lightning are. It’s just a reminder that time stops for no franchise. The clock is ticking, and the Lightning already have a half-decade of “almosts” behind them.