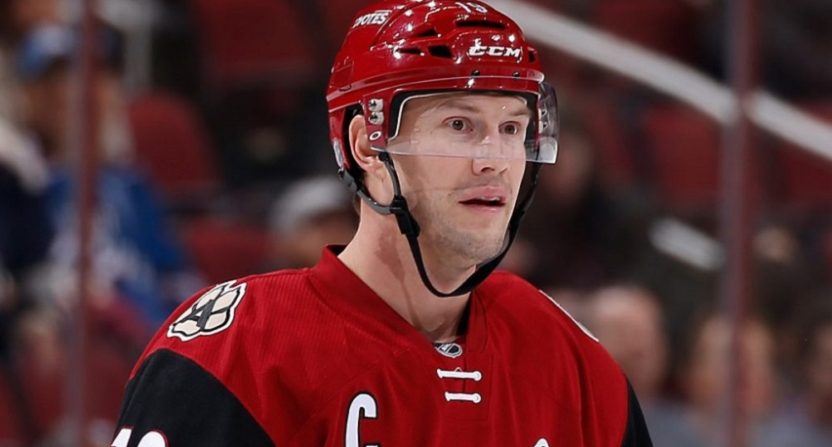 Welcome to This Week in NHL Stupid. For those here for the first time, this is the space (previously seen at Puck Drunk Love) where we track the ugly, the silly, and the just plain stupid in the world of hockey for the previous week.

This past week, we saw the passing of the NHL’s annual trade deadline. This is the day built up as the time of year when many of the league’s star players change teams. But in reality, most of the trades revolve around lesser known names and role players like Taylor Beck and Justin Fontaine. It’s the one day of the season that is bound to infuriate hockey fans. Because we’re like sharks looking for chum, and we’ll bite at anything we see on social media.

Sometimes, we bite into a bone. Those bones are the fake accounts which trick us into thinking a trade is a real trade when in actuality, it’s fake news. There’s a fake Bob McKenzie out there that tricked some people on Tuesday. But this one got me:

The Pens have acquired Martin Hanzal and Anthony DuClair from Arizona for Nick Bonino and a first-round draft pick https://t.co/ZnGOvWVYsK pic.twitter.com/6JTtuPGc75

I saw this on a Facebook group and absolutely panicked. This Twitter account, which spells “Penguins” with an r instead of the first n, has thrown out many fake trades with realistic graphics that are designed to trick you. This one got me because as a Rangers fan, the last thing I want to see is Anthony Duclair, who the Rangers traded for Keith Yandle two seasons ago, go to Pittsburgh, play with Sidney Crosby, and become the star he was supposed to be in New York. This Twitter account, along with looking like the real Penguins account, plays on all of our insecurities and does a good job deceiving people.

So when this fooled me, I felt… stupid. Even though all I did was text my friend that Duclair was a Penguin, I still felt stupid because I spread this without looking for the verified blue checkmark. The stupidity was spread like wildfire last week because of these accounts and unfortunately, I was a part of this. So while I think the fake accounts are stupid, the real stupidity lies with me because I was taken by it.

The next thing I think is stupid, and trade deadline related, is Shane Doan’s career.

Well, not his career. But what is stupid is that Doan has been loyal to the Phoenix/Arizona Coyotes since he was a 19-year-old with the original Winnipeg Jets. His one appearance in the Stanley Cup Playoffs past the first round was in 2012, and the Coyotes haven’t made the playoffs since.

Not only that, the Coyotes have spiraled into a dark hole of empty seats and relocation rumors, yet still haven’t found it appropriate to give the face of their franchise one last real chance at a Stanley Cup run. As Doan said: “not a big market for a 40-year-old, fourth liner who only wants to go to a contender.”

That’s when it hit me: Doan will most likely never get a Ray Bourque chance at a Cup. Yet Martin Hanzal goes to Minnesota, which sank Doan’s heart.

This is what Shane Doan said on @FOXSPORTSAZ during first intermission when asked about Martin Hanzal trade: pic.twitter.com/RvNYIBww63

And yet, Doan still didn’t ask to be traded. It’s a stupid way for a career to end.