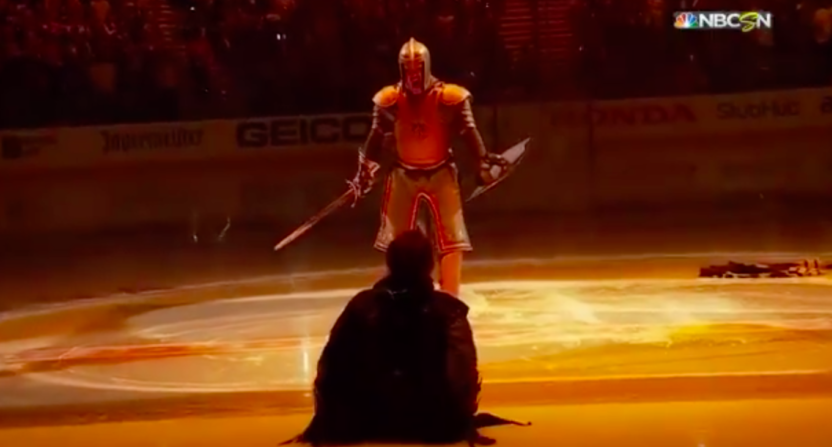 The Vegas Golden Knights were supposed to just be happy to exist in their inaugural 2017-2018 NHL season. In theory, the expansion franchise should be home right now watching the Stanley Cup Playoffs wondering how many years it will take before they get to be a part of the action.

However, nothing the Knights have done in their first season has gone the way it’s supposed to go. Instead, the team came out firing on all cylinders, drew capacity crowds all season long, and ended up not only winning their division and qualifying for the Stanley Cup Playoffs but also hosting the Los Angeles Kings in the first round with a legitimate shot at a deep run.

All of which meant that Wednesday night’s game, Vegas’ first-ever playoff game, was bound to be a pretty big deal. And the thing about Las Vegas is, they’re very good at making a big deal out of things.

Ya think @Vegas is ready for playoff hockey?!

Destiny aligned in terms of team nicknames because, before the puck dropped, a literal king and a literal golden knight took to the ice to square off, Medieval Times-style.

Leave it to the @GoldenKnights to put on an extravaganza to welcome the #StanleyCup Playoffs to Vegas! pic.twitter.com/lNibz6io13

Swords that emit flames that run below ice (without melting it?). Sweeping orchestral music. A battle between good and evil on ice skates. About the only thing missing from all of this was a troupe of showgirls emerging from underneath the crease to do a dance number while the knight sang a jaunty Andrew Lloyd Webber song.

If this is what Vegas does for game one in the first round, imagine what the pre-game routine must be like in game seven of the Stanley Cup Finals? Who knows, the way this season has gone, we might just find out.