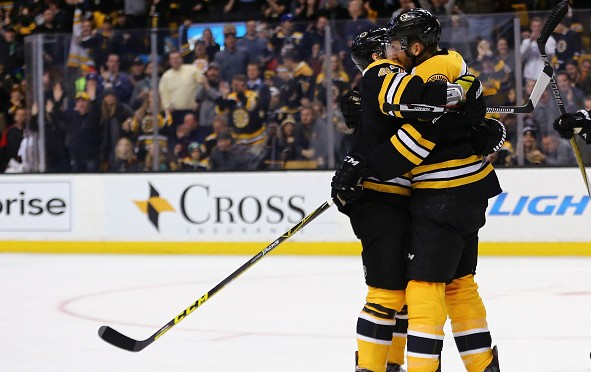 The Winter Classic is the NHL’s marquee event of the season, and for the second time in six years, the league has given the game to the Boston Bruins to host, this time in Gillette Stadium in Foxborough to host the border-crashing Montreal Canadiens. This decision could have been something of a disaster for the NHL, as many expected the Bruins to be, well, a disaster themselves. But through nearly half the regular season, they’ve been anything but. Let’s try to figure out why.

First, a look back to the preseason. Here are a few possible sentiments about the 2015-16 season felt by Boston Bruins fans in August.

“I never thought I could hate anyone more than Jon Hamm in The Town but then Don Sweeney happened.”

“Zdeno Chara is going to give us the most depressing season for a Bruins defenseman since Brian Leetch.”

“Is it wrong that I want Tuukka Rask to suffer a season-ending injury in September so we can maybe get the first pick in the draft?”

After enjoying an existence as a perennial Stanley Cup contender for years, Sweeney took the reins of general manager from Peter Chiarelli and proceeded to blowtorch a roster that missed the 2015 playoffs but amassed 96 points in the process. Dougie Hamilton, arguably the team’s best defenseman in 2014-15, was sent to Calgary. Milan Lucic, a power forward capable of 25 goals when he doesn’t resemble a winded dad playing 1-on-1 basketball with his son in the driveway, was shipped to Los Angeles. Carl Soderberg left as a free agent for Colorado.

Hamilton, Lucic, Soderberg (and if you want to get technical, Martin Jones) all left Boston in exchange for draft picks. Suddenly, a team with championship expectations was considered by most experts to be a rebuilding draft lottery lock.

Here’s a smattering of predictions for the Bruins this season:

Yet here we are, one day before the Bruins host Montreal in the 2016 Winter Classic, and expectations are being exceeded in a major way. They are two points off the division lead with a game in hand; second in the conference in goal-differential at plus-18 and seventh in the league in points percentage.

So why aren’t the Bruins getting the credit they deserve for defying the odds to look like a playoff lock yet again?

Let’s give the Bruins the credit they deserve.

Here are six of the biggest reasons why the Bruins are pushing for a division title when many thought their head coach would be collecting unemployment right now.

Julien guided the Bruins to the playoffs in his first seven seasons before missing last year. He won a Stanley Cup in 2011 and fell two games short in the 2013 lockout season. Even with his roster decimated over the summer and his job in question, he has the Bruins in the black possession-wise with a sketchy defense corps and an overall group that lacks the experience his teams in the past boasted.

It’s SOP in sports for a new GM to want to hire “his guy” to coach the team. There was a two-week window after Sweeney’s hire in April when Julien didn’t know his future, followed by an 0-3 start and rough first month. Since opening 7-7-1, the Bruins are 13-5-3.

2. Loui Eriksson is a Swedish god.

In two seasons with the Bruins, Eriksson may not have underwhelmed, but at best, he whelmed. He was the centerpiece of the Tyler Seguin trade and went from a 70-point player with Dallas to a 47-point player with Boston. With Reilly Smith traded to Florida by Sweeney, more would be asked of Eriksson this season.

And boy, has he delivered. With 13 goals and 33 points in 36 games, Eriksson is well on his way to his best season as a Bruin and perhaps as a professional. He likely won’t shoot 18.1 percent all season but he’s been a possession beast playing mostly with center David Krejci. Eriksson’s 30-goal pace is doing wonders to offset the production the Bruins lost in the summer.

One problem: Eriksson is a pending unrestricted free agent, which means all these goals and points are only driving up his price. Bruins fans waited years for this Eriksson and he may be gone after the season. It’s like spending your whole life waiting for the perfect person, only to find them when they are six months from leaving to live on a space station.

Through Nov. 17, the Bruins’ $7 million goaltender was 5-7-1 with an .890 save percentage; since, he’s 9-2-2 with a .944 save percentage. It’s amazing how easy it is to win a large quantity of games when your goaltending is stopping nearly 95 percent of shots. Rask is an elite goaltender, so a stretch like this should be expected during the season.

4. Zdeno Chara has been very good.

No one is saying we are watching Prime Chara or even Chara from pre-2013, but what he’s doing with this defense group is in some ways more remarkable. The Bruins have no true No. 2 defenseman to regularly deploy on the top pairing, so the 38-year-old Chara is playing 24 minutes per game, a bigger workload then he played a season ago, and holding his own against top competition.

(Yes, playing 40 percent of his 5-on-5 minutes with Patrice Bergeron is helping, but Chara isn’t getting much assistance on the back end)

When you lose Johnny Boychuk and Dougie Hamilton for nothing in consecutive offseasons, your defense should be way worse than what the Bruins are icing on a regular basis. It says a lot about Chara that things are going this well through nearly half the season.

How did rats ever get associated with dirty hockey players? I’ve never seen a rat run a goaltender or low-bridge another rat. Rats enjoy pizza and always know when to flee a sinking ship. Rats seem pretty smart and great, once you look past the whole carrying disease thing.

Despite that reputation, Marchand has always been a skilled offensive player; in 2015-16, he’s on pace for career-highs in goals, points, shots and games suspended (because he’s a rat). He really does it all, even if that includes dubious hits that lead to three-game bans that cause him to miss the Winter Classic.

6. The power play is on drugs.

At 29.4 percent, the Bruins are far and away the NHL’s top power play. The last time a team was that efficient was 1987-88, when the Calgary Flames scored on 28.4 percent of their man-advantage opportunities on the way to a Presidents’ Trophy. Bergeron and Eriksson have seven power-play goals apiece.

The Bruins’ power play has improved by nearly 12 percent over last season, when it finished 17th in the league. They scored 38 power-play goals a season ago; this season, they already have 30.

Maybe this list could’ve just been this last point.

Bergeron has a shot at his first 80-point season; Ryan Spooner has made the loss of Soderberg a non-factor; Matt Beleskey hasn’t been anything but a bust and even Jonas Gustavsson has six wins in 11 starts despite a .906 save percentage, which is significant since the Bruins had seven total wins from backup goaltenders last season.

Everything is coming up Milhouse for the Bruins this season. They are not the tire fire many expected when the Winter Classic faces off.