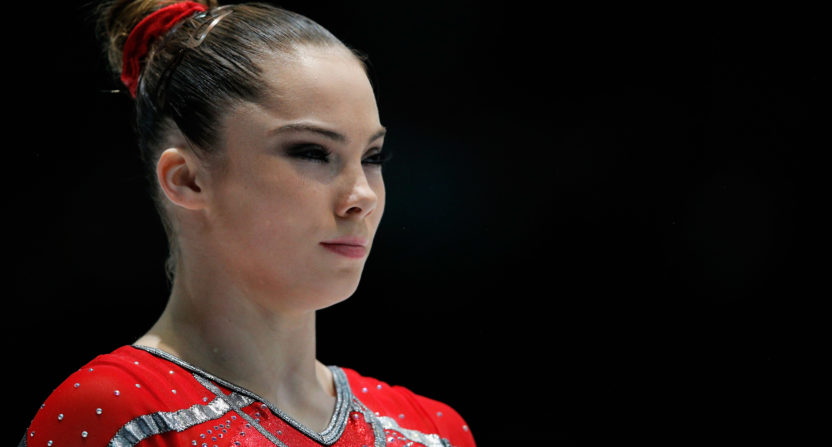 McKayla Maroney was one of the breakout stars of the 2012 Olympics in London, winning a silver medal in the individual vault competition while the women’s gymnastics team captured the gold.

Maroney also went viral for moments like this one:

RT @McKaylaMaroney Did I just do the Not Impressed face with the President..? // Yes. pic.twitter.com/4BkKAfaV

Now, Maroney has added her voice to the list of gymnasts who have reported being abused by USA Gymnastics team doctor Larry Nassar. Maroney detailed her experiences in a lengthy Twitter post last night:

I was molested by Dr. Larry Nassar, the team doctor for the US Women’s National Gymnastics Team. Dr. Nassar told me that I was receiving ‘medically necessary treatment that he had been performing on patients for over 30 years.’ It started when I was 13 years old, at one of my first National Team training camps, in Texas, and it didn’t end until I left the sport. It seemed whenever and wherever this man could find the chance, I was ‘treated.’

It happened in London before my team and I won the gold medal, and it happened before I won my silver. For me the scariest night of my life happened when I was 15 years old. I had flown all day and night with the team to get to Tokyo. He’d given me a sleeping pill for the flight, and the next thing I know, I was all alone with him in his hotel room getting a ‘treatment.’ I thought I was going to die that night.

That’s awful, and horrifying, and an excellent reminder that victims of sexual abuse, assault, and/or harassment often look and act as though nothing is wrong. There’s a certain subset of people who do things like dismiss accusations of rape if the victim doesn’t react like you think a rape victim should act. Immediately going to the hospital or to the police, for example. Maroney’s story is a perfect illustration of why that’s an incredibly insensitive and often inaccurate mode of thinking.

Nassar faces dozens of criminal charges and hundreds of lawsuits over his alleged abuses of gymnasts.