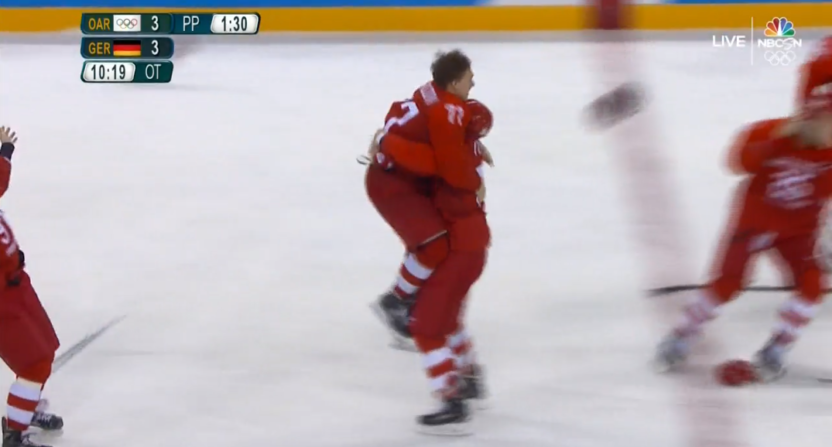 The Olympic Athletes from Russia were the heavy favorites to win the gold medal for men’s hockey in the Pyeongchang Winter Olympics, but they needed a late goal in regulation, followed by a power play goal in overtime to take down tournament surprise Germany in the gold medal game.

The first goal of the game came on literally the final second of the first period, when former Los Angeles Kings defenseman Slava Voynov scored this goal for Russia with 0.5 seconds left in the period:

Germany tied the game 1-1 in the second period, and the game remained tied until Russia’s Nikita Gusev scored with 6:39 left in regulation:

But just 10 seconds later, Germany’s Dominik Kahun tied the game back up:

And three minutes after that goal, Germany took a stunning 3-2 lead on this shot from Jonas Müller:

It appeared Germany was going to pull of the shocking win entering the final minute; they had a power play and the one-goal lead. However, Gusek scored again with this ridiculous backhander for the shorthanded Russian goal to tie it with 55.5 seconds left:

And the winner for Russia came just over 10 minutes into overtime, when Minnesota wild 20-year-old prospect Kirill Kaprizov — the youngest player on the team — scored a power-play goal.

Germany entered the semifinals with 25/1 odds to win the tournament, and then shocked Canada 4-3. They almost pulled off another stunner, but the more talented Russian team ultimately came out on top. The silver medal is the best-ever result for Germany in men’s hockey.

And the gold medal is Russia’s first since 1992.